Since the publishing of Michael Wolff’s now-infamous Fire and Fury on January 9, many of the book’s reviewers have seized upon Wolff’s methods, the veracity of his accounts, the trustworthiness of his sources. In his author notes, Wolff says that in gathering his observations and interviews, he attained “something of a fly-on-the-wall status.” Wolff says he conducted hundreds of interviews with sources including the president, and had what he calls a “front row seat” to the Trump presidency because he “parked” himself on a couch in the West Wing, which was a thoroughfare from which he observed all manner of administration chaos.

Wolff’s accounts of the Trump administration’s first months in office are not exactly revelatory — but they are delectable. Wolff provides enough salacious details to turn the expressions of usually beleaguered liberal Americans into smirks; despair at the state of our nation’s political affairs into distracting smugness. His work has also added narrative clarity to Trump’s actions in terms of his less-than-firm grip on reality, prompting the President to lash back on Twitter by describing himself as a “very stable genius.” Wolff’s book has provided a look into the White House and into Trump’s interior that we’ve been hungry for — but perhaps not one that is exactly accurate.

Who Wolff talked to, and for what information, is unclear; it’s also often unclear whether Wolff’s accounts are those he gathered through firsthand observation, whether they were relayed to him through interviews, or some combination therein. Or as NPR’s Annalisa Quinn writes, “most information in Fire and Fury is delivered through omniscient third-person narration, as if Wolff were an all-seeing eye. That means that any given fact could have been delivered directly from the president or trickled thirdhand through a rumor mill.”

Quinn also likens Fire and Fury to “a parody of New Journalism.” Though seemingly intended as a slight — she also calls it “slimy and carnivalesque” — how Fire and Fury is similar to and diverges from this controversial journalistic tradition can provide a way of assessing the work’s place in our culture, its merit or lack thereof, despite or because of its apparent reportorial “flaws.” We can’t forget that New Journalism, which has had an indelible influence on how reporters depict the world today, has also been thoroughly criticized for its factuality and reporting methods. During a time when the bias and credibility of mainstream journalism is under attack, does reporting with slippery standards of veracity have anything different, and valuable, to add in the way we can understand our world?

For those who haven’t recently plumbed the works of 20th century American reportage, “New Journalism” was the style of narrative reporting invented and honed by authors including Gay Talese, Truman Capote, and that other Wolfe, Tom. It is the type of writing we now largely refer to as narrative non-fiction; writing that uses literary and novelistic techniques such as story, dialogue, and character to nonetheless report something that is true, something that really happened. Whether things really did happen the way that Capote, Wolfe, and company say they did has been a matter of public debate for decades. And some new journalists, notably Gail Sheey and Joseph Mitchell (who is more of a New Journalism grandfather, really), have gotten in hot water for their use of “composite characters”: invented individuals, based on a composite of multiple real people. That’s a big journalistic no-no. Nevertheless, the work of the New Journalists is gripping and important. It captured cultural phenomena in the ‘60s such as the sexual revolution or the summer of love in ways straight journalism couldn’t. The details gathered by the discerning literary reporters of the last century helped America understand itself. Perhaps Wolff’s book, in its immersion and the license it takes in narrative reporting, can do the same.

So how does reading Fire and Fury as a work of New Journalism help us understand it, and the Trump administration, better?

New Journalism’s defining stylistic characteristic is its use of literary techniques, including a narrative, dialogue, scene-setting, symbolism, and characters. And on its face, Wolff’s Fire and Fury does conform to these conventions. Through dialogue and failed political machinations, readers get a better sense of Steve Bannon, Reince Preibus, and Jared Kushner as people and power brokers than the news provides. The image of President Trump locked in his room devouring McDonald’s cheeseburgers seems to visually stand in for Trump as a paranoid child. The back and forth Wolff provides between Ailes and Bannon is snappy and revealing. And the overall structural arc of tracing the campaign through the early days of the administration provides novelistic pacing and suspense.

But through all these devices, something more “novelistic,” doesn’t arise. In “The Birth of ‘The New Journalism’; Eyewitness Report by Tom Wolfe” Tom Wolfe wrote that the early new journalists — including himself, and notably Gay Talese and Jimmy Breslin — came upon this sort of storytelling as a discovery that “it just might be possible to write journalism that would […] read like a novel.” Wolff’s account does not feel like a novel, all together: it feels like a pastiche predicated on gossip. But a highly enjoyable one.

The kind of reporting we were doing struck us as far more ambitious, too. It was more intense, more detailed, and certainly more time-consuming than anything that newspaper or magazine reporters, including investigative reporters, were accustomed to. We developed the habit of staying with the people we were writing about for days at a time, weeks in some cases. We had to gather all the material the conventional journalist was after — and then keep going. It seemed all-important to be there when dramatic scenes took place, to get the dialogue, the gestures, the facial expressions, the details of the environment. The idea was to give the full objective description, plus something that readers had always had to go to novels and short stories for: namely, the subjective or emotional life of the characters. That was why it was so ironic when both the journalistic and literary old guards began to attack this new journalism as “impressionistic.” The most important things we attempted in terms of technique depended upon a depth of information that had never been demanded in newspaper work. Only through the most searching forms of reporting was it possible, in non-fiction, to use whole scenes, extended dialogue, point-of-view, and interior monologue. Eventually I, and others, would be accused of “entering people’s minds”…But exactly! I figured that was one more doorbell a reporter had to push.

The point of Wolfe’s explication is that the novelistic techniques are only possible precisely because of the level of reporting. Tom Wolfe could only enter the mind of Phil Spector because he specifically asked Spector “what were you thinking at that exact moment.” And in the years since the “birth” of New Journalism, this level of immersive reporting has only expanded — along with greater need for and expectation of record-keeping in what the journalist Robert Boynton calls “the New New Journalists.” Adrian LeBlanc, the author of Random Family, famously spent a decade reporting on her subjects, and took to leaving tape recorders with her subjects so that they could record their thoughts, feelings, and interactions when she wasn’t there. In Kate Boo’s vivid and affecting piece The Marriage Cure, a tape recorder is even visible in a photo with Boo’s subjects.

Wolff claims that this is the level of reporting he achieved for Fire and Fury: the venerated journalistic fly on the wall, the confidante, the fixture. He also claims he has tapes of interviews with Bannon and other aides, and that merely being in the environment offered him a window into the White House’s inner workings. But both sorts of access, translated into the “all seeing eye,” should give readers pause, in a way that Breslin’s colorful courthouse reporting does not.

The main person on whom Wolff relies for on-the-record accounts, Steve Bannon, made his career spreading discord through partisan and racist lies at Breitbart. Even if he is an insider, how much can we rely on him to tell the truth? Who were these interviews really serving? Those questions are not clear.

Furthermore, a seat on a couch in a vestibule surrounded by busy staffers “in short skirts,” as Wolff helpfully points out, may allow for observation of facial expressions, but does not guarantee entrance into everyone’s mind. With this sort of sourcing, and lacking journalistic transparency about how and from whom his information flows, it’s unclear whether Wolff’s work can amount to as definitive an account of the early days of Trump’s White House as Gay Talese’s writings on the sexual revolution through the eyes of Hugh Hefner.

We know that Tom Wolfe went to the parties, talked to the socialites, got inside the heads of mid-century power brokers. But Michael Wolff had to throw the parties himself for access: Fire and Fury opens with a prologue of a conversation that took place between Bannon and Roger Ailes, at a dinner party that Michael Wolff himself orchestrated. That goes far beyond organic observation.

But through the dialogue and gossip, the anecdotes and impressions, a picture of Trump’s White House does emerge, that rings true, and is not one that I believe can necessarily be achieved by straight reporting. In a rigorously reported journalistic piece, it’s necessary to get verbal confirmation from a source that they were thinking or feeling something at certain times — and this is something the New Journalists say they did. But is Ivanka ever likely to confirm on the record that she was frustrated with her father? A facial expression and gossip might be better suited to telling that story.

Wolff’s account is a picture of the chaos wrought by a hapless leader who may be losing his head, and depicts a place where coherent policy and communication are largely impossible. Despite Wolff’s reputation as a gossip-monger, Wolff’s characterization in his author’s note that the factual fluidity of his book is central to reflecting the instability of the White House rings true: “many of the accounts of what has happened in the Trump White House are in conflict with one another; many, in Trumpian fashion, are baldly untrue. Those conflicts, and that looseness with the truth, if not reality itself, are an elemental thread of the book.”

Maybe, to get at the truth of the Trump White House, a seat on a couch, an ear for dialogue, a dinner party to get people talking, and an author who’s happy to put it all together, can say what sources on the record simply cannot. And in our political time, that’s an account that we cannot afford to discount. 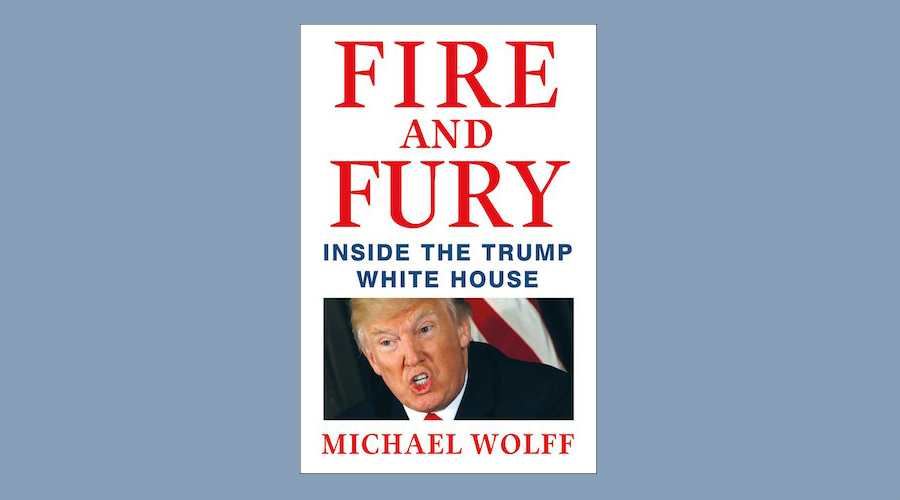