The 1985 movie Clue is notable for its experimental triple ending(s). In its last 15 minutes, Clue offers up three separate endings, each giving a different answer to the mystery of whodunit. It’s an especially cute gimmick because the movie is based on the board game of the same name (known as Cluedo outside North America), where in each new game a character is selected at random as the one whodunit. It’s fitting that Clue builds multiple possible outcomes into its plot structure.

The theatrical release tried to be even more experimental: audiences would be a shown just one of the three endings at random, and would have to return multiple times (and buy multiple tickets) to see all three endings. Perhaps unsurprisingly, the movie didn’t rake in triple profits but instead was a spectacular flop. It was only when the movie was released for home viewing that the endings were merged to create the movie that became a cult classic. It’s this version that I want to discuss because, planned or unplanned, it’s the movie’s perfected form.

Clue is set up as a triple-strength whodunit. On the principle of “more is more,” though, Clue pushes the whodunit formula so far that it ends up playing a madcap game within the confines of the detective genre. And in pulling the genre apart from the inside, Clue lays bare the inner workings of all detective stories. Clue‘s multiple endings aren’t just a clever cinematic translation of the board game’s structure — they reveal something crucial about the nature of clues in general.

Since Conan Doyle’s Sherlock Holmes and Poe’s Dupin, the central activity of the detective — and the detective genre — has been the process of distinguishing clues from red herrings. Both the detective character and readers or viewers are offered a profusion of details, and are tasked with separating the signal from the noise. As Holmes puts it in a story called “The Naval Treaty,” “The principal difficulty in your case lay in the fact of there being too much evidence. What was vital was overlaid and hidden by what was irrelevant.” There’s always too much evidence in a detective story, which fits beautifully with the general too-muchness of Clue. The major difference is that the end of a typical detective story reduces that superabundance down to the bare essentials in order to solve the case.

Typically, the detective sifts the clues from the red herrings more successfully than we do. A big part of the genre’s appeal is the detective’s dazzling explanation at the end, laying out the genuine clues and the (correct) conclusion they point to. We suddenly discover, with a lurch, how little we’d understood correctly up to that point, and mentally retrace the events laid out in the plot with new understanding. As readers we stand alongside the drawing room full of suspects or the squadron of bumbling police officers, listening awestruck as Dupin or Holmes or Hercule Poirot or Miss Marple lays out the facts. The detective’s final summing up dazzles us with sudden clarity. Knowing for sure, finally, what’s a clue and what was just a red herring is deeply satisfying.

By multiplying the big reveal by three, Clue lays bare the inner workings of this procedure. In any detective story, up until the final big reveal, any given detail could be a clue or a red herring. In contrast, Clue brings that doubleness to the forefront and never resolves it. Details that prove to be clues in ending A (“Miss Scarlet did it”) are red herrings in ending B (“Mrs. Peacock did it”), and vice versa. And all these details become clues of a different kind in the final, more complicated ending C, which I’ll come to in a moment.

Let’s start with just the first two endings. Before the storylines split into three, we’ve encountered potential clues such as the French maid Yvette’s cartoonish sexiness (is she really a maid?) and Mrs. Peacock recognizing a dish at dinner as “one of her favorite recipes.” In ending A, Yvette’s sexiness proves to be a valid clue (she isn’t just a maid but also worked for Miss Scarlet’s high-end escort service, and so Miss Scarlet killed her to keep her quiet), while Mrs. Peacock recognizing the dish serves simply as a red herring. Ending B reverses that pattern: Mrs. Peacock recognizing the dish is a genuine clue here (it reveals she had previously employed Mr. Boddy’s cook, and provides a motive for Mrs. Peacock killing her), while the details that were incriminating for Miss Scarlet minutes ago in ending A go unmentioned in ending B, sinking into the forgettable obscurity of red herrings. (Amusingly, in all three endings “communism” is declared to be “just a red herring,” with special emphasis on the “red.”)

This reversibility of clues and red herrings might seem limited to Clue and its unique multiple endings, since conventional detective stories ultimately resolve all these questions conclusively. But while the stories might resolve conclusively, Clue reminds us that the detective’s solution isn’t something we’re forced to accept. It’s always an option for readers to reopen the case and try to make sense of the clues differently. This impulse is at work in the fan theory that all the victims in Murder She Wrote were really killed by amateur detective Angela Lansbury. In a delightful short story by James Thurber called “The Macbeth Murder Mystery,” a Christie-obsessed character who reads Shakespeare’s Macbeth insists, “I don’t think for a moment that Macbeth did it,” going on to explain that “you suspect” Macbeth and Lady Macbeth “the most, of course, but those are the ones that are never guilty.” The detective mindset can be hard to shake.

Even just Clue‘s first two endings turn the question of what’s a clue and what’s a red herring into an unresolvable dilemma, each ending undercutting the conclusiveness of the other, showing them both to be arbitrary contrivances. But the third ending goes even further in upending the logic of the whodunit by redefining the “it” that’s being investigated. Ending C reveals that the butler Wadsworth has been the real Mr. Boddy all along, while the man in black lying dead in the study is that of the real butler — a twist that prompts us to rethink the fundamental premise of this whodunit. Since the man in black isn’t Mr. Boddy, the “it” in Clue‘s whodunit turns out to be different from the crime we originally imagined.

But the whodunit question becomes even more complicated, because Wadsworth/Boddy didn’t actually murder the man in black, nor did he commit most of the subsequent murders. For convoluted reasons I won’t go into, in ending C it’s Professor Plum who killed the man in black, while Mrs. Peacock killed the cook (for the same reason as in ending B), Mrs. White killed Yvette, Colonel Mustard killed a driver whose car broke down and Miss Scarlet killed a cop. Each of the suspects (except Mr. Green) is responsible for one killing. What was a single focused campaign of killings in the first two endings are here entirely uncoordinated and committed with different motives in each case.

This third ending throws the clue/red herring question open in a way viewers haven’t been invited to consider as an option. In “The Naval Treaty,” after explaining the problem of “too much evidence,” Sherlock Holmes then describes his work as “reconstruct[ing] this very remarkable chain of events.” This chain of events — singular. In detective stories, there’s one crime to be investigated, one chain linking all the relevant events. Multiple unconnected crimes are out of the question. The genre is called whodunit not whodunthosethings.

So while the whodunit setup had led us to expect a single repeat murderer hidden within a party of innocents, in this third ending there are no innocents — everybody is guilty of something. And as a result multiple sets of clues can be valid simultaneously, even when they point towards different people in each case. Mrs. White’s scowl at Yvette a few minutes into the movie becomes a clue to her resentment (Yvette had an affair with her husband). Mrs. Peacock revealing she already knew the cook — a clue in ending B — is a clue here too, but only points to who killed the cook. Even Mr. Green’s buttoned-up demeanor is no longer a sign that he’s a closeted gay man, but a clue to his true identity as an undercover FBI agent (with a wife, mind you). Every character’s suspicious behaviors in earlier scenes turn out to be clues that all can be valid at the same time.

The revelation is like being blasted in the face with a confetti canon of evidence — fun and disorienting at the same time. Clue‘s third ending, by multiplying the number of distinct killers, also multiplies the number of genuine clues. Nothing remains as a red herring (besides communism) in this dizzying third ending. Clue is, in the end, all clue.

That doesn’t mean it all adds up — far from it. If you rewatch the movie looking for clues to the third ending, you’ll also come across many details that don’t add up (why do the dogs bark at Wadsworth/Boddy in the opening scene if it’s his own house?). I love this ending and don’t care that it doesn’t add up, because despite having the conventions and plot structures of a detective story, the pleasures that Clue offers aren’t the pleasures of a successful detective story. The movie anticipates viewers who will approach it with the serious scrutiny of a detective, gets ahead of them, and makes that activity seem as laughable as the ridiculous characters scampering around on screen. In answer to the question “whodunit?”, Clue says “who cares!” It has no interest in the Holmesian or Christie-an dazzle of truth.

Instead, its triple ending is one of many ways the movie revels in redundancy and excess. This helps explain why it originally flopped among viewers expecting a detective story with a single solution, and then became a cult classic, mentioned alongside The Rocky Horror Picture Show and Showgirls in the annals of queer and camp fandom. Clue doesn’t much value careful observation, painstaking reconstruction, ingenious inferences. Clue is about shrieking, running breathlessly around a grand mansion, sexual innuendo, arch one-liners, heaving cleavage, glittering costume jewelry. In other words, it values many small and trivial things that give a momentary pulse of pleasure and don’t need to add up to anything bigger. And so rather than giving us a conclusive ending where a masterful detective virtuosically ties everything together, Clue leaves us with the more scattered pleasure of a million little clues. 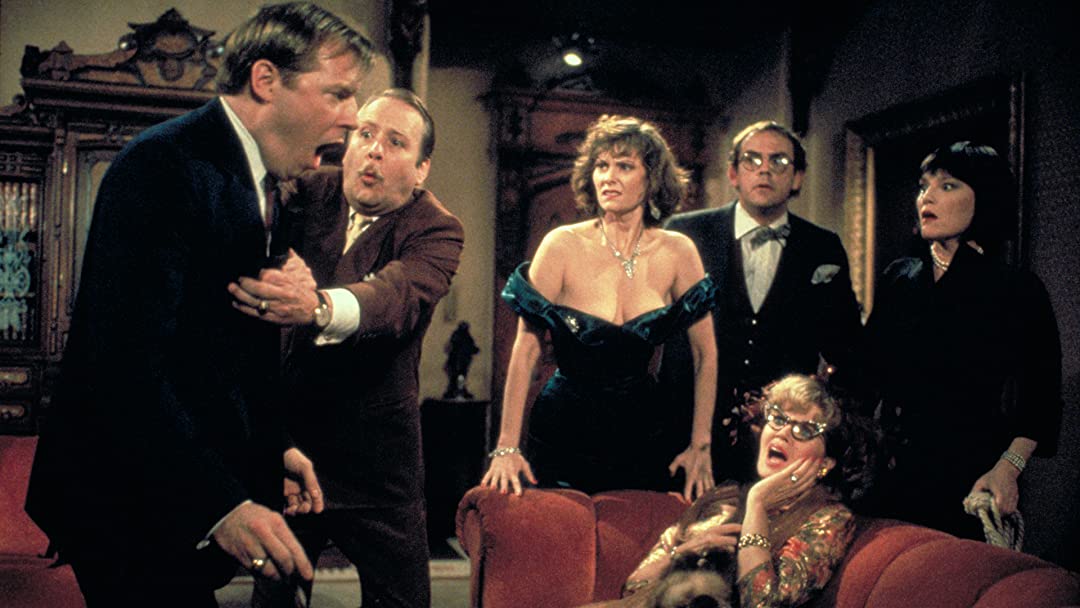