In the endless low comedy of Trump Administration press conferences, it was easy to miss an important moment in a February 21st briefing when Sean Spicer described an executive order called “Enhancing Public Safety in the Interior of the United States” designed to round up and deport people he described as “criminals.”

A few days later, on March 1, Daniela Vargas spoke out against the deportation of her non-criminal father and brother, and then of her own dreams of becoming a math professor. She was in the U.S. under the terms of the Obama-era Deferred Action for Childhood Arrivals (DACA) measure, and had become a straight-A honor student. Shortly after her remarks in Jackson, Miss., she was arrested.

This president sees every instance of resistance as a personal slight, and many have seen Vargas’ arrest as retaliatory. Her renewed DACA application was pending after it had lapsed for three months while she worked to save the $495 needed to re-apply, and on this minor lapse ICE could get her. And get her they did, though she had successfully saved up the application fee and had submitted her papers, which were under review at the time she was arrested. Daniela Vargas was sent to the La Salle Detention facility, a Louisiana for-profit private prison run by the Geo Group.

During the press briefing, Sean Spicer noted, “The President wanted to take the shackles off individuals in these agencies [DHS, Border Patrol and ICE].” They are instead being placed on immigrants, quite literally, as in the case of Sara Beltran-Hernandez, a 26 year old mother of a toddler and asylum seeker from El Salvador, who fled her domestic abuser there, and was recently diagnosed with a brain tumor. She was detained entering the US, and imprisoned at The Prairieland Detention Center, a for-profit private prison, for over a year when she had to be hospitalized for the brain tumor. Beltran-Hernandez was incomprehensibly shackled not just as she was transported to and from the hospital where she was being treated, but while she was being examined there as well. Chris Hamilton, a local lawyer, was threatened with arrest when he tried to visit her there; her family was also denied access.

Through the support of Amnesty International, Beltran-Hernandez has since been released to her family while awaiting review of her amnesty case, yet what we are witnessing now all around us is that mothers are being torn from children, children are being carted away for speaking out in defense of their families.

These are not the “bad hombres” and violent criminals the Trump Administration purports to be targeting. These people pose no threat to the public good. But under this administration’s new definitions, the parameters for “criminal” are widening, including anyone caught illegally entering or illegally re-entering the country, anyone who has used a fake ID in order to work, or has committed any kind of misdemeanor, such as a traffic violation, anyone who is even under suspicion of having committed a crime, under these new parameters is treated as a hardened criminal.

Trump is effectively criminalizing an entire population, and when everyone is a criminal anyone can be jailed and then deported.

Largely because of public outcry and media attention, Daniela Vargas was released from detention on March 12. Her lawyers argued for “her right to be free from retaliation for protected speech,” but her deportation order stands, and could be enforced at any moment. Like millions of others, Daniela now lives in constant fear; the terror is palpable.

Under this administration, we have repeatedly been confronted with what would previously have been unthinkable in our country; we have repeatedly had to make sense of the resultant frenzied havoc, to frantically defend the democratic structures which are meant to uphold our society as they are systematically being attacked with a fervor that is manic, with a fervor that reveals itself as determined to destroy the very core of American democracy. Who knew it was all so fragile?

As we try to make sense of the madness, as we attempt to understand the implications of what is going on all around us, others are presently fearing for their freedom, for their families, for a way of life that they have sacrificed to build and worked hard to maintain.  These are the people who clean our homes, who pick our fruit, who cook for us, who watch our children. Daniela Vargas’ family overstayed a visa in order to take jobs at a chicken processing plant, deboning chickens for 11 cents a pound, work that few others would have taken. These are the people who keep countless businesses running with their cheap labor, with their willingness to do the work no one else will touch, and they, these people who make our easy lives possible, these people on whose backs this country has enriched itself, my people, are being rounded up like animals and put into the scandalous system of for-profit prisons.

The Obama Administration had begun to phase them out. In a memo issued in August 2016 Assistant Attorney General Sally Yates delineated the reasons:

They simply do not provide the same level of correctional services, programs, and resources; they do not save substantially on costs… they do not maintain the same level of safety and security. The rehabilitative services that the Bureau provides, such as educational programs and job training, have proved difficult to replicate and outsource- and these services are essential to reducing recidivism and improving public safety.

Last week, the Trump Administration reversed the policy and the stock for CoreCivic, Geo Group and other organizations in the for-profit private prison trade doubled that same night. Anyone who dares let their status waiver, even as they are saving the money to comply, can be detained and deported. Any parent who attempts to re-unite their family by using smugglers to bring their children into the U.S. will immediately be prosecuted.

The Department of Homeland Security is now also considering a plan to separate mothers and children caught crossing the border illegally. The mothers would be sent to a prison, where they can be used as free labor, while the children are placed in government hands at the Department of Health and Human Services. In response The American Academy of Pediatrics released a statement calling the plan, harsh and unproductive:

…in any time of anxiety and stress, children need to be with their parents, family members and caregivers… to comfort and reassure them. Federal authorities must exercise caution to ensure that the emotional and physical stress children experience as they seek refuge in the United States is not exacerbated by the additional trauma of being separated from their siblings, parents or other relatives and caregivers.

Congressman Henry Cuellar calls this proposal a human rights violation. In his words, “Bottom line: separating mothers and children is wrong. That type of thing is where we depart from border security and get into violating human rights.”

“We’re getting really bad dudes out of this country, and at a rate that nobody’s ever seen before,” said Trump. “And they’re the bad ones. And it’s a military operation.” He added, “You see what’s happening at the border. All of a sudden for the first time, we’re getting gang members out. We’re getting drug lords out.”

At “Still Waters In A Storm,” a one-room schoolhouse where I’ve begun volunteering once a week, Stephen Haff offers an after-school and weekend program to the children of mostly Latino immigrants. The kids range in age from seven to fourteen and together they read and translate, Don Quixote, learn Latin, write and tell stories, eat together and hang out. The children host weekly guests, including Salman Rushdie, Zadie Smith, Francisco Goldman and others. The last time I was there they were hosting Patrick McGrath and Maria Aitken, along with actors from a recent production of The Importance of Being Earnest.

These children are terrified. In a recent mail to me Stephen wrote: “It’s a scary time for the families we work with in Bushwick. They have been advised by the Legal Aid Society, ‘no abran la puerta.’ [don’t open the door].”

There have been other times in history when the knock on the door was a dreaded sound for ethnic minorities. The year after he received the Nobel Prize in Literature, in 1929, Thomas Mann gave a speech in which he explains the “real purpose” of anti-Semitism in Nazi Germany:

The anti-Semitism of today … is no object in itself. It is nothing but a wrench to unscrew, bit by bit, the whole machinery of our civilization. Or, to use an up-to-date simile, Anti-Semitism is like a hand grenade tossed over the wall to work havoc and confusion in the camp of democracy. That is its real and main purpose.

This was four years before the legal election of Adolf Hitler. The anti-immigrant attacks we are witnessing today, are a similar tool in the undoing of our democracy, for they strike at the very core of what it is to be human. 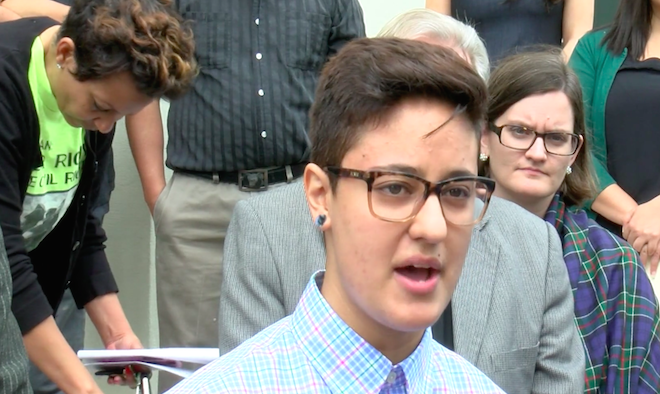