In December 2019 as Delhi broke into a series of anti-CAA protests, the city came unstuck in time. It was a small way for Delhiites to reclaim their city, streets, and culture. As crowds pulsed down the KG Marg and Barakhamba Road outside my then office in Central Delhi’s Connaught Place, I stood at the roadside, watching. The grey, overwhelmingly gloomy visage of the place added to the mood. It was just past noon as the sun struggled to make its presence felt behind a thick sheath of smog. Thronging up and down the roads was a mixed crowd, young and old, women and men, all wearing their fragile hearts on their sleeves. I took this scene in while sipping a piping hot cup of chai.

The memory doubled down on me, as that would be my last cup of chai on the roadside. Soon, in the second half of January I would quit this job and move to a new gig where chai would be prepared indoors in an electric kettle. And then in March, the whole world would be wrapped in the throes of a pandemic that would wipe off any semblance of life from every outdoor space. Things would worsen for migrant workers in India, as suddenly rendered jobless, they would undertake a long, tiring walk back home. This mass migration of thousands would evoke bad memories in the people, bringing shame to the entire nation.

In the ongoing pandemic, India experienced a massive fall in tea consumption by 25-30% in the last six months. The reasons ranged from reduced availability of the beverage to a sharp decline in out-of-home consumption at roadside tea stalls or tapris, restaurants, cafés, offices, and other such places.

According to the data shared by the Federation of All India Tea Traders Association (FAITTA), out-of-home tea consumption accounts for nearly 40% of total domestic sales of the beverage. The average monthly domestic consumption of tea in India is around 90 million kilograms, of which out-of-home consumption accounts for 36 million kilograms. In April-May 2020, the industry saw a whooping loss of around 72 million kilograms of tea consumption. A beverage especially dear to migrant workers across the country, it came as a setback for tea lovers everywhere. In the wake of the mass evacuation by the workers, another unanswered question that haunts the Indian tea industry is whether the migrant workers, who returned to their hometowns, were drinking the usual number of cups that they used to do at their workplaces.

Ever since I left home in 2008 for university, I have found solace in a cup of chai every now and then. It would become an emotion for me, an equivalent to my mother’s cool hand on my cool forehead. A balm to sooth my wrung-out soul.

Tea first came to me in Kanpur, my hometown, as its North Indian avatar — a thick, creamy and sweet drink, meant to be had mostly in the morning and evening. As a kid whenever I would visit my parents in their office, we would be offered tea in those tiny, disposable plastic or Styrofoam cups.

While living in the northern city of Lucknow as university students, tea for us would conjure different emotions. The morning cup at Hazrat Ganj with bun-maska, sitting by the Gomti River meant a distinct world. We friends sitting, early in the morning, away from our respective homes and hometowns, discovering independent life in a new city. The taste of tea that morning was all the more sweeter because it had a hint of freedom to it.

The lemony, minty Sulaimani tea in Pune would become my go-to option on evenings after filing my stories as a reporter with a leading national daily in 2015. On rainy days, I would ask the chai waala to add a dash of black pepper to it. That extra bit was enough to make me forget life’s worries, albeit momentarily, and take in the views of the beautiful city before me.

Later, in 2016 when I moved to the South Indian city of Coimbatore all I could manage, other than cups of filter coffee, was black tea available in only a few roadside stalls. It was a bare preparation, often served without sugar. That November, the Prime Minister announced a ban on a few major currency notes, which led to a prolonged economic crisis from which India is yet to recover. I would start preparing the normal, milky, boiled up chai with spices like black pepper, cardamom, cloves, sugar, and milk at home. Then, tea meant comfort in the known, when all else had suddenly become alien.

When I moved to Delhi in 2017, chai came to mean a lot more. It came with a sense of bonhomie, sharing and banter. Friendships thickened over cups of chai had over a course of months. I would meet my now boyfriend over a simple cup of milky chai, when he would pretend to enjoy it. He comes from West Bengal where the limu-cha is as famous as their communist party. Prepared without milk, a pinch of tea leaves, black pepper, lemon and salt, this tea would go on to become the flavour of my subsequent winter. But, right then, across from our office, the milky, often too sweet chai meant a kind of an ice-breaker. You could gauge the state of mind of friends with the way the conversation would flow in those 10 minutes.

In India, drinking chai transcends boundaries. You would see team leads taking their awkward juniors out for a quick cup or a new business around the corner make small talk with people gathered around a tea stall. Roadsides across the four cities that I lived in India are dotted with chai stalls, and serve varieties of tea for different customers.

Throughout the country tea is sold and purchased as a ritual by chai waalas on the roadsides. Sitting in makeshift stalls, these vendors often make their livings out of selling chai to office going people like us. To accompany the beverage, they keep varieties of biscuits, toasts, cheap cream rolls and mathri (a salty, flaky biscuit from North India). To complement their sales, they often also run a kiosk of samosas, onion-potato fritters, loose cigarettes and piping hot maggi noodles.

On Delhi’s pale winter days, coming back from home, I would disembark the train and take a cab ride in the crisp misty air. Held by the black charm of the dark at the window, the day slowly coming to its own, I would cherish the taste of the cup. As the cab honked its way to my rented flat, the night music drifting across my mind, I would thank an unknown force for the silversmith of the morning, my cup of chai.

I have enjoyed these in a wide variety of occasions. After a long day at work, I would often walk to a faraway chai stall, and gallivant there with a cup of chai and cigarette, quietening my jumpy nerves. Chai meant therapy then. Another way of unwinding would be when I would overhear conversations at these stalls. People cribbing about their daily lives: extra hours, less pay, strict bosses, that lazy co-worker, poor hikes, tensions at home, lack of job satisfaction, and other such quotidian malaises. On the days I felt too maudlin, I’d take a break from work and lurk near one of these chai tapris. If nothing else, feeding the stray dogs nearby would help me catch my breath and overcome the gloom.

These chai stalls across the country see a daily footfall of about 500-600 people and with the various lockdowns and COVID-19 related restrictions these vendors lost all business. With no passersby on the roads, in their quiet tenor these tapris saw barely any customers for a few months at a stretch. With rules relaxed now, the business seems to be picking up, but it is certainly not back to its original rigor.

Across the country’s varied culinary landscape — where what one eats and drinks can signal class, caste, religion, ethnicity, and income — chai is a neutral comfort food as well as a necessity. A glass can cost anywhere between INR 5-10, and can be found at five-star hotels as well as in the fields of rural India. Chai is, in many ways, bound up in multiple Indias that all exist simultaneously. The beverage is a part of our culture now and binds people from across cultures, geographies and languages. In my experience as a tea drinker in Delhi, Chennai, Coimbatore, and Pune I have seen people from various walks of life come together for those brief 10 minutes and exchange knowledge, mundane as well as profound over it.

For the duration of March-May 2020, the Indian Tea Association (ITA) has pegged a revenue loss of about INR 2,100 crore for the industry in Assam and Bengal. The total loss of production in these two states, as a consequence of factories shut due to lockdown, quantifies to around 140 million kilograms. This plummet is not the only reason behind aggravating the financial stress of the tea industry. Even though the input costs have been rising for the past five years, there has been no concomitant rise in prices leading to a higher loss than expected.

The National Association of Street Vendors of India plans to train street vendors and help them revive businesses. The Union Ministry of Housing and Urban Affairs earlier announced a scheme to give all street vendors affordable loans of up to INR 10,000 which can be used as working capital to help them get back on their feet. Since these vendors usually work with a small capital base taken on very high interest rates (sometimes as high as 1% per day, amounting to nearly 400% per annum) from informal sources, this kind of assistance offered by the government will take them a long way.

The primal human need for connection had made tapris an indelible part of the fabric of India, uniting it in so many ways. In the light of declining disposable incomes, the consumption of tea has dropped down dramatically in India. But the chai romantic in me sees this is a momentary setback. As the migrant workers all over the country slowly make their way back to the cities, the need for workhour chai for them will gradually see a rise.

Sitting at least two meters apart in rows outside the construction sites near my house in South Delhi, I see workers with their plastic cups of chai. With puffed cheeks as they blow  air on their cups to cool it off, they share a joke and laugh. With their masks gingerly tucked in the breast pocket or are hanging by their waists, I see them adapting and molding their ways. Something tells me it’s all going to bounce back, and it’s going to stitch back into the fabric that earlier existed earlier, and that this will happen very soon. 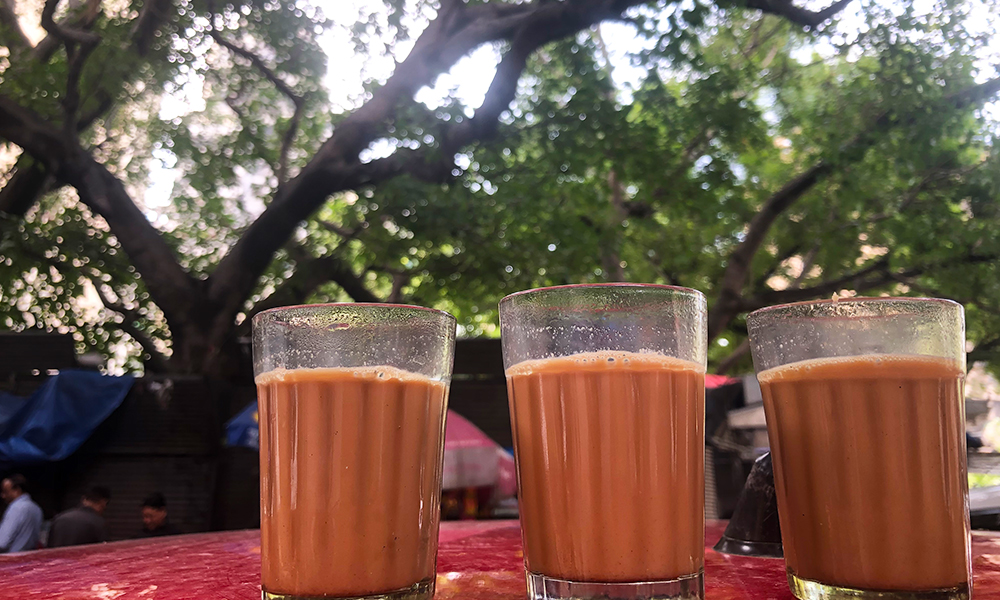