A spider’s web appears in the opening and closing images of Debra Granik’s new film Leave No Trace. It’s an apt metaphor. Granik’s film meditates on how social fabrics hold people together and the degree to which those same tensile wires make for social death traps. Leave No Trace explores the uneasy relationship between social life and death in America, an old question the film takes up with new and complex urgency.

The film rests on the father-daughter relationship of Will, played by Ben Foster, and his daughter Tom, played by the excellent Thomasin Mackenzie. Both a coming-of-age and castaway tale, infused with the themes of social, economic, and environmental destruction, Granik’s film opens to the pair living in the woods, off-the-grid. While the reason for their remove isn’t immediately clear, Granik unfolds the logic of their isolation in the film’s opening movement: Will is an Iraq War vet with PTSD.

For viewers in 2018, it isn’t hard to build the case for opting out. Will and Tom’s life in a lush public park in Oregon only formalizes the trouble so many Americans see in existing social fabrics and the escapist allure of leaving them behind.

Granik invites her viewers to the old questions of a castaway narrative — as enduring a story shape as any we have. In the history of literature and film, stories involving castaways begin with The Odyssey and Robinson Crusoe and run forward through The Swiss Family Robinson, The Blue Lagoon, Lord of the Flies, Mosquito Coast. More recently, films like Cast Away, Gravity, The Martian, and All is Lost reflect the genre’s enduring appeal.

Spanish philosopher and essayist José Ortega y Gasset wrote of the relationship between castaways and modernity: “These are the only genuine ideas; the ideas of the shipwrecked.” Gasset connects the search for meaning and popularity of castaway stories: “to live is to feel oneself lost  —  he who accepts it has already begun to find himself … He who does not really feel himself lost … never finds himself, never comes up against reality.” Gasset wrote these lines in the looming darkness of 1929 Europe, but they may well feel fresh to viewers of Granik’s film in 2018. If we are undeniably lost, adrift, in search of something, what is it these castaway stories provide? What do we hope to find in them?

Robinson Crusoe, one of the original articles, suggests a comfortable existence outside of social and economic society — a bumptious and optimistic vision of the individual. By the middle of the novel, Crusoe parades around his island with a handmade umbrella, debates about starting a brewery, and travels between his three houses. The novel is fantasy of more than simple survival off the grid. Crusoe thrives. Swiss Family Robinson indulges in the same imperial fever dream. Castaway stories of this type reassure viewers of the power of the individual, while indicting existing socio-economic structures as limiting or unnecessary.

Similarly, Gravity, The Martian, and All is Lost portray protagonists who survive by will and ingenuity alone, and — in the suffering of their central characters — these stories suggest the allure of social and economic society. The dramatic resolution of these tales always involves a return to society and its strange but comforting conventions. If the castaway narrative successfully horrifies viewers, it concurrently reassures them of existing social and economic structures. We learn to love the world in our fear of losing touch with it. In this sense, a castaway story traumatizing its protagonist necessarily represents a conservative artform.

In Granik’s Leave No Trace, Will and Tom don’t achieve the comfort of Crusoe or experience the horror of Cast Away. Their campsite is sparse and efficient, and the surrounding landscape fills Granvik’s camera with fecund greenery. The two main characters, like the forest, are vibrant, alive — foraging for mushrooms and embodying elements of DIY fantasy. The transitions between forest and the shots of urban Portland, Oregon advance the film’s suggestion of the social and environmental death at the core of our age. Granik’s Portland is no left-wing, crunchy paradise. We see only highway, the screeching and grunting of modern life, a bleak VA Hospital. When Tom and Will venture to Portland for supplies, viewers long for the bucolic scenes of the forest.

The allure of remove never leaves the film’s first act. Once the Park Police and Child Protective Services capture the pair, Tom says, “We didn’t need to be rescued” in an interview with a social worker. Inhabiting the audience’s voice, another social worker says to Will, “A lot of people like to imagine they could live like you guys did,” as the state apparatus subjects Will to an absurd, automated psychiatric exam.

Granvik’s film is no fan of modern life and its endless layers of bureaucracy. Her eye seems to revolt at suffocating rooms with their mineral fiber drop ceiling tiles, and these bleak scenes fill the film with sympathy for Will and Tom. Crucial to both the film’s plot and purpose, Will is no bad father and his reasons for taking Tom into the woods feel right and true. Tom performs well on the standardized tests the social workers give her, suggesting isolation from the social fabric does not, in some sense, preclude success by its standards.

Leave No Trace fills its middle-section with indictments of American late capitalism through the lens of Tom and Will’s failed attempt to re-acclimate to social and economic life. Granvik finds much tragic irony in Will’s job on a Christmas tree farm, where nature bends to the will of commodification and standardization. The staff teaches Will how to trim the tree to exact specifications of the consumer. It’s an industrial-style harvest, involving chainsaws, helicopters, and tree-packaging machines. Granik turns it into a warzone. Helicopters roar over ahead, carrying trees to be wrapped and packed, and Granik’s original, wild forest comes to mind. Viewers won’t miss which one is more appealing.

The scenes at the farm trigger Will’s PTSD — and Granik draws a straight line between the damage of US foreign policy and environmental degradation. The marketplace is another form of social death in the world of the film, and, while Will suffers from acute war trauma, Granik sees larger forces at work. We live in a horrorshow of our own making. Even as Tom tells her dad, “it might be easier on us if we try to adapt,” the audience doesn’t totally believe her. When the pair eventually run from the farm — Will’s choice, not Tom’s — we understand the flight. We chased them away; part of us wants to run with them.

The delight and brilliance of Granik’s script and film lies in its complexity and ambiguity. The systems enmeshing the father-daughter duo are evil, but the people running them aren’t. Social workers in the Portland scenes exhibit kindness and decency; an avuncular farmer sees Will and Tom’s story on the news and wants to help; a neighborhood boy invites Tom to join in 4-H events, involving a series of adorable and winning rabbits; a trucker offers Tom and Will a comfortable and sociable ride; a mobile-home park-owner opens her doors to the two travelers; an army medic provides critical care, free of charge. Everywhere in the film people do the right thing and do right by one another. Without spoiling the dramatic resolution of the film, Granik never fails to offer both indictment and endorsement of social life.

Granik’s castaways in Tom and Will emerge as mirrors of American social and economic life. Viewers understand well the need to run and the urge to stay on. This question undergirds our fascination with the castaway narrative. Ramping the emotional stakes in the film’s final act, Granvik probes these cultural wounds with an unflinching eye.

If each castaway narrative must finally decide whether and how to return to civilization, Granik’s film remains ambiguous. Like the best moments near the end of Zemackis’ Cast Away, where Hanks’ Chuck Noland wonders if the way back was worth it, Granvik refuses to let her audience away from questions about existing social and economic organizations. Unlike Zemackis’ sentimental ending, Granik expands the castaway trope to contain both sympathy for return and desire to flee in the same story. Here, Granik has contributed a new and vital position for the castaway story. She neither beatifies the individual, nor does she endorse existing social relations.

Tom spends the film’s final movement learning beekeeping. It’s a useful metaphor, but a bit unlike the spider’s web with which we begin and end the film. It is Aristotle, who, in the same sentence as his famous declaration that “man was a political animal,” attempts to delineate the difference between people and bees. The famous line about humans innate sociality also illustrates Aristotle’s respect and reverence for what he calls the “gregariousness” of the bee, a creature on which he spends a great deal of time in The History of Animals. When he thought of what made us us, he thought of the bee as our closest analog in terms of social organization. Humans are social animals in Aristotle’s formation, and Tom finding a home in beekeeping is perhaps Granik’s final endorsement of some inescapable human, social destiny.

It’s tempting to see Granvik’s film as a choice between the life of the spider — solitary, self-sufficient — and the social life of the bee. However, she takes no side. Leave No Trace holds no reassuring plot resolution, and part of the film’s lack of commercial appeal may well lie in its refusal to resolve its central questions. Like Gasset’s argument for the enduring truth of the castaway philosophy, Granik brings us right up against reality. These are the genuine ideas: “to live is to feel oneself lost.”

Viewers sympathize with Will’s need to leave society and Tom’s desire to return to it. In this duality, Granvik breaks new ground for the castaway narrative. We feel horrified by the world we’ve built and feel bound to it in the same moment. We love the individual and still know her need for others. We long to live outside of history and continue to realize how much history needs us here to help it. 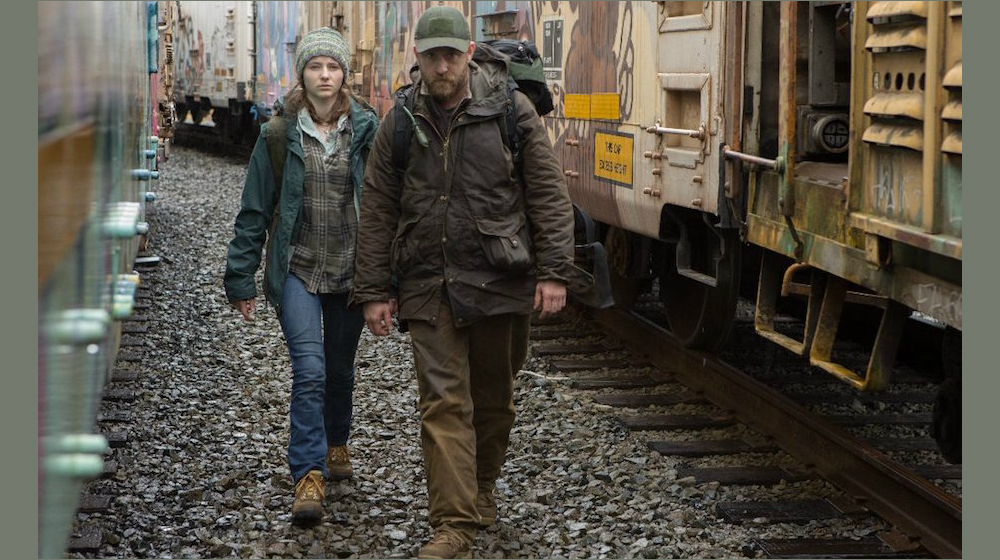