I was “stateless” as a child.

At 11, I left communist Romania with my parents. Upon our emigration, our citizenship was revoked; the state I.D. card replaced by a little booklet with our pictures, a travel permit. On the paper, our nationality was marked as “stateless.”

This word brings back a cluster of bodily reactions and emotions I have trouble untangling. As I utter or write it, my palms sweat, I feel a lump in my throat, my breath is short, my heart beats faster. My head bends down, my shoulders slump, I feel shame and fear.

I remember the journey. We had train tickets to Austria, but our transit visas were valid for just one day. Our entry visas were to Israel. The train trip through Romania and Hungary and across the Iron Curtain was punctuated by officials in different uniforms checking the travel permits, interrogating my parents, examining our meager luggage.

You could not take any valuables out of the country, so my thin gold chain with a small red heart was removed from my neck at the Romanian border. The border guards cut open the stomach of my teddy bear to see if anything was hidden inside. Straw came out, and the hole kept growing wider through the trip. My own stomach churned with fear.

I had imagined the iron curtain to be a physical barrier, but it was only guards with different uniforms, ominously recalling the second World War I had heard so much about. They made sure to remind us that we had to leave Austria the next day. At the Westbahnhof, one of Vienna’s main train stations, we met the representative of the agency in charge of us. He insisted on taking us along with a larger group to a transit camp to spend the night so we could board the plane to Israel the next morning.

In the early 1960’s, during the Cold War and Israel’s effort to attract Jewish immigrants, such agencies worked hard to make the transition as smooth as possible. But my parents had decided to stay in Austria while weighing where in the world they might eventually be able to obtain visas and citizenship.

That’s where the lies began. My father promised to be at the airport the next morning — we were going to spend the night with cousins. We never went to the airport. We now had neither money, nor valuables, nor papers. Nor was anybody responsible for our survival. The term “stateless” came to encompass this sense of utter dispossession and negation. It connotes the hiding and lying, the fear of discovery, the feeling, when we finally obtained a temporary residency permit in Austria, of being tolerated but unwanted.

And it brings back the quite desperate appeals for asylum and belonging, for the legitimation of citizenship and a passport. It does so to this day, over a half-century later. Well into their nineties, my parents prized every document they possessed, and showed great fear of officials asking for them. I fall into this behavior as well — every time I open my U.S. passport, crossing a border, my body relaxes and I am so grateful to have a valid one. It’s not something I will ever take for granted.

This month, Donald Trump decided, unilaterally, to end the program that protected some people like me who came to the United States as young children under the age of 16 and who have lived here continuously since from deportation. It is estimated that 11 million people currently living in the U.S. are “stateless,” or, in today’s terms, undocumented, unauthorized, illegal. Among these, nearly 790,000 undocumented “DREAMers” have qualified for DACA, Deferred Action for Childhood Arrivals, and have thus been able to apply to have their deportation deferred for two years.

These young people under 35 have been “stateless” for most of their lives. They left their countries of birth through no choice of their own, most likely fleeing unlivable circumstances. Living in the U.S. for most of their lives, however unwanted, they have no place to which to return as other than “stateless.” The controversial DREAM Act signed into law by President Obama in 2012, after much congressional debate and delay, offered them the hope of security, luring them into identifying themselves and applying for conditional residency.

I was fortunate to come to the U.S. legally with my parents who had managed, with great effort and after a long wait, to obtain visas and the generous support of the HIAS (Hebrew Immigrant Aid Society) and the Jewish Family Service of Providence, R.I. who helped us relocate. Volunteers welcomed us and brought us to the apartment they had prepared for us in Providence. I was 12. All was utterly unfamiliar, in English, a language I did not speak, but it was our new home. We continued to be “stateless” until we got our green cards. With green cards you still don’t get a passport, but we were able to travel. Five years later, my parents and I could apply for citizenship. With my “naturalization” certificate, I became American.

Despite its attractive associations with the American dream of hospitality for the vulnerable from across the globe, the DREAM Act (Development, Relief and Education for Alien Minors) has an unfortunate name. In order to spell that resonant term “dream,” it required an A and the A is for Alien. To be alien is to be other, strange, unwanted, and, it seems, unnatural. It is to be stateless. With the revocation of DACA, the hundreds of thousands of people benefiting from its temporary reprieve are again in limbo. Young people intending to apply see the personhood that legal status would grant them disappear.

Whether we have personally experienced statelessness or not, we must protect the rights and personhood of those who have acquired legal status through DACA and those who qualify to apply. Congress can act today to create a permanent solution that would protect these young people from deportation and grant them citizenship. Only thus can we regain a small measure of what is still being described as the American dream. 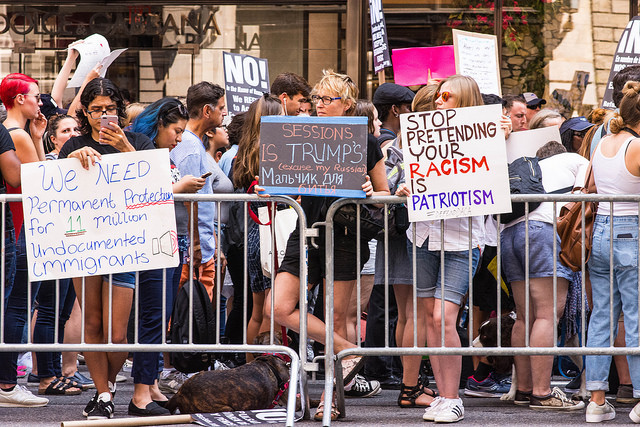