Society is not designed to hear women’s voices. As Mary Beard writes in Women & Power, when women speak out “it doesn’t much matter what line you take…if you venture into traditional male territory the abuse comes anyway…A significant subsection [of threats] is directed at silencing the woman.”

Dr. Christine Blasey Ford broke that silence and spoke out against Supreme Court nominee, Brett Kavanagh, about his assault of her 35 years ago. She had everything to lose, and nothing to gain. The price for breaking that silence was death threats, email hacking, and being impersonated online. She’s had to relocate her family to avoid unwanted public attention.

Women watching the Ford-Kavanaugh spectacle were in tears, as were their male allies. But those tears were also a sign of anger. The #MeToo movement has set a precedent for removing male predators from positions of power, but it seems to have come to a screaming halt once it hit the brick wall that is the Republican Party. Indeed, the public treatment of women by members of the Republican administration fits Kate Manne’s discussion of misogyny as “punitive, resentful, and personal, but not particular.”

Had Ford responded as Kavanaugh did, with partisan political statements about a left-wing conspiracy, she would have been labeled hysterical, angry, and strident, and dismissed outright. As one woman wrote:  “She is the epitome of a woman academic who has made her way through extreme competence and intelligence and not pissing the men around her off.”

In We Should All Be Feminists, Nigerian author Chimamanda Ngozi Adichie notes that western women are highly invested in being liked, which necessarily requires that we not show anger or be aggressive or disagree too loudly. She writes, “We spend too much time telling girls they cannot be angry or aggressive or tough, but then we turn around and either praise or excuse men for the same reasons.” As Soraya Chemaly writes in Rage Becomes Her, anger is not considered a valid emotion for a woman — though sadness is, which is why we often cry “tears of rage.”

But Adichie fails to identify the reasoning behind being “likable.” In many cases, it’s purpose is to protect us from men and the results of their anger. If you’re liked, maybe they won’t get angry with you or hurt you. Maybe you won’t get the cold shoulder or be attacked or threatened or have your tone or behavior policed. As Jess Zimmerman writes at Dame, “This is the world we go armored against: the one where the response to “I’m afraid of your anger” is “well, don’t make me mad and we won’t have a problem.””

The Ford-Kavanaugh spectacle is something that we should all be angry about. It exposes everything vile about the underbelly of US politics and the wholesale failure to see and treat women as equal human beings. Some argue that Ford was treated even worse than Anita Hill was 27 years ago, and that it shows women yet again that coming forward about sexual assault is in some cases as terrible an experience as the assault itself.

Women need to get angry and stay angry, and channel that anger into action. In 1981, Audre Lorde wrote, “Every woman has a well-stocked arsenal of anger potentially useful against…oppressions, personal and institutional, which brought that anger into being. Focused with precision it can become a powerful source of energy serving progress and change.” Soraya Chemaly devotes an entire chapter of Rage Becomes Her to how to effectively channel our anger. Even Time magazine notes that women’s anger is rising in everyday society, saying “Boldness, distilled from our anger and laced with a sense of humor, is the only solution. Forward march.”

As Mary Beard writes in Women & Power, “we have to be more reflective about what power is for, and how it is measured…if women are not perceived to be fully within the structures of power, surely it is power that we need to redefine rather than women?” In July of this year, a New York Times piece discussed how some of that power is being redefined by the large number of women running for political office and winning, “many of them suburban, middle-aged and not particularly radical, who are making political activism the center of their lives.”

The Women’s March, held the day after Trump’s inauguration on January 21, 2017, may have been the largest protest in American history. Approximately five million people in more than 600 cities marched to advocate for the rights of women, workers, and LGBTQ peoples, as well as racial justice, immigration reform, and more. That march was repeated again in January of 2018, drawing large crowds and focusing on the concrete goal of Power to the Polls, which aims to increase voter participation and the number of women running for office.

Our power lies in breaking the silence and using our voices to articulate our anger and purpose. We want the same freedoms that men have: to be free from the male gaze and male harassment, the ability to walk alone at night without fearing for our safety, the ability to make our own choices in relation to our own bodies, the same pay for the same work.

And we are angry enough to fight for it. 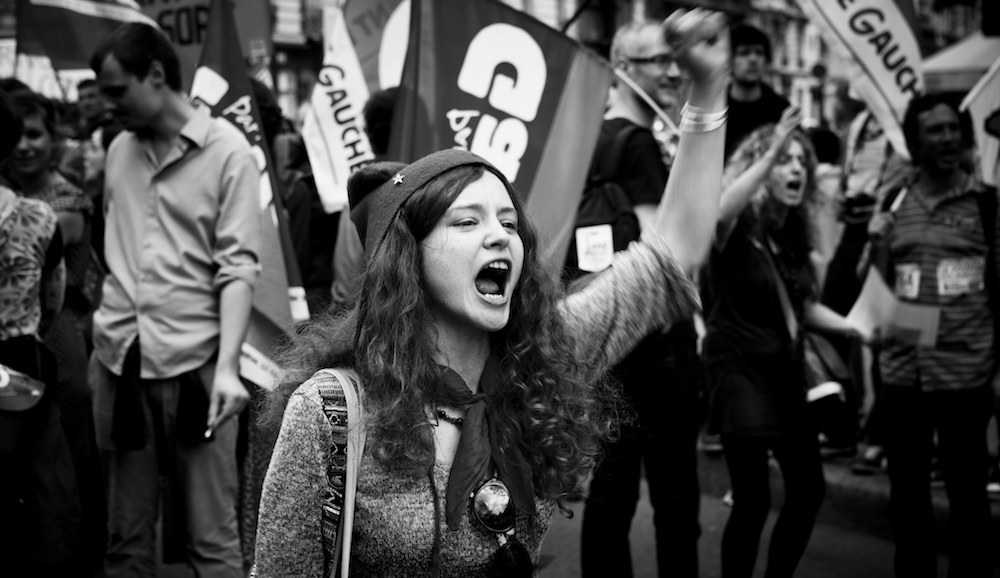