For Those Afraid Print is Dead, Look No Further than the Kolkata Book Fair

Suranjan Roy, 67, was sitting under a temporarily quiet loudspeaker on the first night of the 43rd International Kolkata Book Fair, trying — and failing — to convince me that he’s “very middle-brow.” But Roy, who was wearing narrow black-framed glasses and a navy blue jacket in the evening winter chill, conceded that he’s always “surrounded by books.”

By his own estimates, Roy owns more than 1,500. “I tell my wife I won’t be able to read them all in my lifetime.” A retired banker-turned-editor, he wasn’t sure, yet, if was going to buy more books this year or not. But it was only the first night.

Founded in 1976, the boimela, as it’s known in Bengali, is still overseen by the Publishers and Booksellers Guild that originally formed to launch the event. Unlike the Frankfurt Book Fair on which it was modeled, however, the IKBF is open to the public. Based on “footfall,” with over 2.2 million visitors in 2018 and similar projections for this year’s throng, the Kolkata book fair is the largest in the world. Spanning twelve days, it celebrates not just books but also the everyday people who read them.

Kolkata, formerly Calcutta, has long been considered the literary heart of India.  Presidency College, the first “modern” university in Asia, was founded here in 1817. The Calcutta Public Library was among the first in the world. Daily newspapers in both English and Bengali have been widely circulated across Kolkata for two hundred years. And from the early 19th through the early 20th century, the city gave rise to the Bengal Renaissance, an era of tremendous social and intellectual upheaval and progress that eventually dovetailed with the Indian independence movement. Rabindranath Tagore, 1913 Nobel Laureate for Literature, is unambiguously heralded as the city’s patron saint.

This almost mythic reverence for reading and education remains undeniable to Kolkata’s history. But as a foreigner newly arrived to this teeming city of over fourteen million people, I’d been eager to see how that tradition was upheld. Sure, murals of Tagore’s drawings line the walls at my local Metro station, but in the age of global distraction and selfies, part of me wondered how much anyone still actually read.

From the outset at least, the boimela appears not unlike a very crowded American county fair: an annual event that attracts young and old and requires wandering around several acres in dusty shoes and eating greasy food. But instead of 4-H goats and a demolition derby, there are books, books, fried fish, and more books.

Byapti Naskar, 13, with short hair and dimples, was the proud owner of several new volumes of Feluda Samagra, detective stories written by Satyajit Ray, on which he also based two movies. For generations of Bengalis, reading Feluda has remained an adolescent rite of passage. Naskar was with her dad, who, speaking through a translator, said he’s been coming to the book fair since 1987. Even though he works in Jammu and Kashmir, he tries to return to West Bengal this time of year to bring his daughter to the fair.

Nandini Ghosh-Choudhury is a medical researcher who has been living in San Antonio, Texas for over thirty years. In town to visit her mother, Ghosh-Choudhury explained that though she’s lived abroad for a long time, she’s “always reading books in Bengali.”

I stopped Naskar and Ghosh-Choudhury within minutes of one another, outside the Bengali publishing house Ananda, where I also spoke with Mohammad Rafique, a sixtysomething poet in a brown fez who taught for many years at a madrassa and has a new self-published book of poetry coming out this week. His eleventh.

Despite almost every other demographic difference, all of them shared what I was quickly realizing was a love of reading as palpable in the atmosphere as the hazy winter pollution.

On the first night of the fair, the Chief Minister of West Bengal, Mamata Banerjee assured visitors that just as “water was essential” to life, so too were books. Banerjee argued that despite the evolving forces of technology, books would remain part of our lives. With a likely unnecessary reminder, she announced that every festival in Kolkata was big. “Like Durga Puja,” she said, which is celebrated with particular fervor in Kolkata. The book fair, Banerjee promised, would be no less intense. And she was right.

Across the fairgrounds, various publishers set up shop in hundreds of individual stalls and three enormous tents. From global houses, like Penguin and Oxford, to independent Indian firms, such as Aleph and Rupa, to Kolkata icons that publish books exclusively in Bengali, like Ananda and Dey, some stalls held little more than a few shelves, while others appeared like an entire small town library.

Though some critics scoffed at the number of things to buy other than books — mango lime pickle, life insurance, bridal jewelry, and tutoring services to help with overseas college applications, for instance — I was pretty spellbound, both by how many miles of books there were and by how many people were so steadfast in their consideration of them.

Just how jam-packed everything was is hard to overstate. Outside Ananda, the line wrapped around the building. “On the weekends,” I was warned more than once, “you won’t be able to move.”

But over several different (weekday) visits, I browsed everything from, yes, innumerable volumes of Tagore, to Shakespeare and other British classics, to novels of beloved contemporary Indian writers like Amitav Ghosh and Jhumpa Lahiri, to Stormy Daniels’ Full Disclosure. And like Kolkata itself, the boimela struck me as both overwhelming and intimate, larger than life as well as almost familial.

For Riddhi Maitra, who is in her late 20s, this was her second book fair in her role as the managing editor at Bee Books, an Indian publisher. Like many Kolkatans, Maitra grew up attending the fair and finds it “surreal” to now work there. But the chance to make personal recommendations has become Maitra’s favorite part. “You may not always buy a book,” she told me, “but you should always know a good book.”

Although the IKBF primarily showcases books in Bengali and English, books in various other Indian languages like Hindi, Kannada, Tamil, and Santali are available as well.

The fair is also something of an international crossroads, with countries like Russia, Japan, the US, and Vietnam hosting their own stalls. Since 1997, the fair has included an annual “theme country,” with this year’s emphasis on Guatemala. Unfortunately, the books by Guatemalan writers were “on display,” rather than available for purchase, but that didn’t appear to keep anyone from considering the large picture of Miguel Angel Asturias.

Sabyasachi Ghosh, a thirty-year-old law student, was leaving the fair with a book on Vedanta, Orthodox Hindu philosophy, and the writings of Maa Sarada, a late 19th century religious leader known as “The Mother.” Ghosh said that when he was little, the book fair introduced him to literature from around the world. This year was the first time he was buying exclusively spiritual texts. “As I’m getting older,” he explained, “I’m searching for something else in life.”

Like many people, Suranjan Roy, the former banker and editor, remembers the first book fair in 1976, when he bought a Roget’s Thesaurus he still uses. The fair then was held in the Maidan, a large stretch of park in central Kolkata.

“We had no idea it would still be running in 2019,” he said grinning. But Roy was also concerned. Given the preference most middle and upper class families have for their children to receive an English education, Roy thinks young people today can be “snooty” toward their mother tongue. He wonders if the Bengali language is neglected “by Bengalis themselves.”

But the book fair seemed to offer over 2.2 million reasons to take heart, both in the health and well-being of Bengali literature and the future of reading in general.

Anish De Sarkar, 23, a graduate student in microbiology, was having a coffee behind a fried fish cart after buying the collected works of Sukumar Ray, Satyajit Ray’s father, in the original Bengali. Even though Sarkar attended English-medium schools, he was still taught Bengali literature. But since doing his undergraduate and now his graduate degrees exclusively in English, he makes an effort to read Bengali in his free time. “I keep reading story books to maintain the connection,” he said. 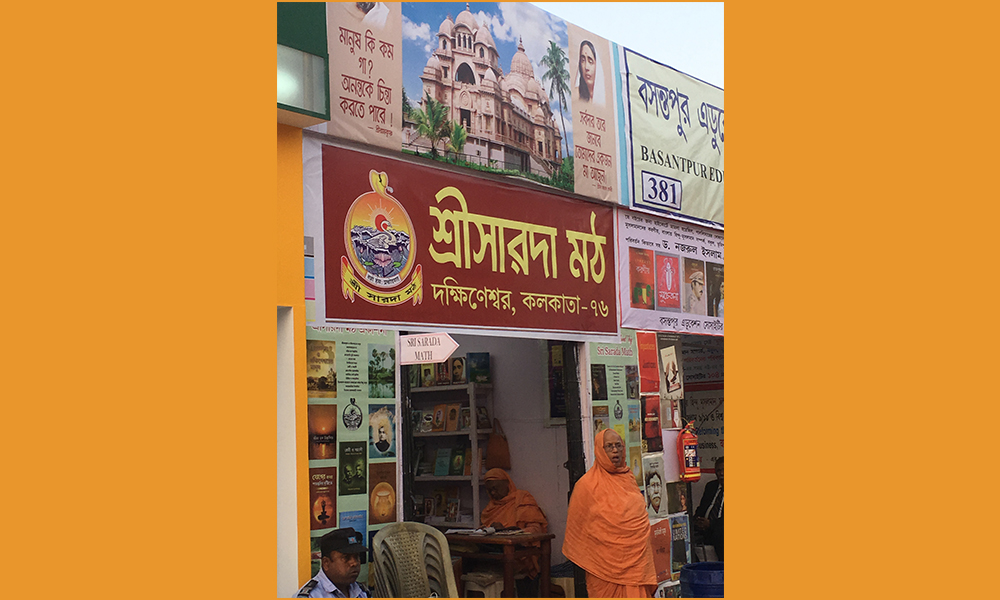