Berlin is a waiting room. Last week we went to a dinner party. There were Syrians, Israelis, Somalis, Germans, a Croat, a Greek, and, myself, an American. At times it was a Danse Macabre of sorts. Syrians and Israelis commiserated about overcoming preconceptions. A Somali interjected that five years of war was nothing — see what fifteen years of war does to your reputation. Two Somalis argued about the security situation of their country. One insisted it was getting better; there is a boom in the Mogadishu real estate market. The other said she was just there. She spent three nights sleeping under her bed, the sound of gunshots ringing out in the distance. There’s a government now, he countered. Who elected them? She retorted. Are there hospitals, public schools? The Greek exclaimed: That’s the key! I was invited to weigh in and issue an opinion on the matter. It’s hard for me to say, I replied — I don’t know much about Somalia and I don’t think I’ll be visiting Mogadishu anytime soon but I was enjoying the conversation. Somalia is one of the largest producers of goat meat in the world. It has more camels than people. These are things I learned. The climate is temperate. It has the largest coastline in Africa but the people don’t eat fish. The food is spicy. The Greek asked if I was planning on staying in Berlin forever. I guess that depends, I responded, on if Trump wins the election. A pro forma response. It’s gotten some laughs. Is he going to win? Someone asked frantically. I started to say I don’t think so, but it was too late. I think he might! Another added. Has America gone insane? Is half the country Nazis? Michael Moore says he’s going to win! I couldn’t get a word in. America has some serious problems, someone said in conclusion. This the Israeli, the Somali, the Syrian, and the Greek could all agree on.

A few weeks ago a friend invited us to a party for gay people of Middle Eastern backgrounds and anyone else looking to have a good time. It was a lot of fun: a show by a Lebanese transgender woman called Diva, leader of the group Queens Against Borders; pulsating Arab and Turkish pop music, punctuated by ululating affirmations; statuesque Middle Eastern men twisting their bodies with lithe movements. But the highlight of the night, for me at least, was when the crowd was sent into a momentary frenzy by the techno remix of Hava Nagila.

My desk is next to the window in our living room, overlooking the street. Every day I sit here for eight to twelve hours, working, watching my abbreviated ecosystem. The window faces the door of the opposing building. On the handle of the casement window are worry beads that my parents bought for me in Turkey (decorative) and, below it, a post-it note that reads STOP THINKING (imperative). I have slowly insinuated myself into the life of the opposing building. I know its inhabitants better than I know the residents of my own building. There is the Greek man (there is a Greek flag on his balcony) that lives on the fourth floor. He picks herbs from the small garden on his balcony in his underwear on most mornings, and in the early evening, now fully clothed, goes out to play soccer with his son. There is the stout elderly woman with short hair who walks her (very eager) German Shepherd every morning at approximately 10am. A middle-aged woman leaves the building once or twice a day. She usually wears a neckerchief and a newsboy cap. She pauses on the building’s short front step, looks to the left, looks to the right, looks up in the trees. She takes a few steps, pauses, looks up the street, down the street, in the trees, and so on. This goes on for about fifteen minutes. A young man on the ground floor opens his shutters once a week (they are always closed) and places a plant on the window ledge, watching it intently for five to ten minutes, as though silently beseeching it to grow, and then takes it back inside: the shutters close. A kitten lives in a different ground floor apartment and enjoys attacking the curtains; a mature cat lives in the apartment above it and sits on its balcony in the morning sun; they sometimes sit one above the other, watching the street, each unaware of the other’s existence. Most curious, however, is the elderly man who lives directly across the street from me on the ground floor. Five to ten times a day he pulls back his curtains (the shutters are never closed) and opens his window; he leans forward, places one hand on the ledge for support, and looks out, looks up and down the street, as if he had heard a frightful sound or someone had called his name. Perhaps he is just curious. He has a round face, long white hair that runs past the shoulders, and a long white beard. He wears a white button-up shirt and black suspenders; sometimes he wears a white t-shirt underneath but more often the white button-up shirt is open, or he wears no shirt, and his formidable paunch is bursting out between the suspenders. The elastic on his pants, black track pants with gold stripes down the side, is broken and the pants are held up by the suspenders; when he turns from side to side to look out the window his upper hips show above the sagging waist line. News of his character seems to have spread in the neighborhood. I have seen group of kids walk by, tap on his window, and take off running. He comes out a moment later: looks up the street, looks down the street. Every few days he goes out to buy groceries, pulling a little cart. His shirt is closed, he has added a brown vest, and he now wears glasses with a gold wire frame. The outer seams of his pants are torn and his leg is exposed; he walks slowly; he always wears the same pants. He returns 20 to 30 minutes later; sometimes he sits on a bench in the park on the corner. I ran into him there once. This week he is wearing a black button-up shirt and a black tee shirt, the first time I have seen him change an article of clothing in three months. It could be that he is crazy, as the neighborhood kids no doubt believe, or it could be that he is old, poor, and has little social contact in his life. Maybe he had a wife once; maybe he has kids that no longer call; maybe he has friends but they no longer come by; or maybe he was always like this, living a solitary life, watching car models change in the streets. 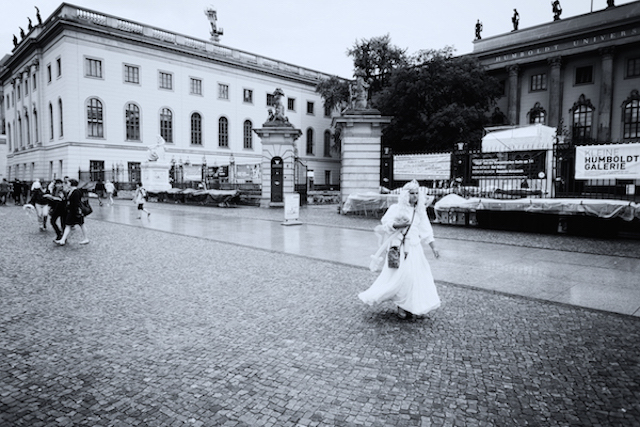