I remember the pop. It was in my ears on descent into the small Paducah airport in Kentucky. Or maybe it was my mother’s bubblegum. Pop.  She always chewed gum to keep pressure from building in her ears, blowing bubbles and popping them so her ears wouldn’t do the same, the sound working its way into long-term memory; a twinge that awakens the dying and nearly dead memories of more than 15 years ago; a sound that can keep a memory alive.

It was the annual summer trip to the grandparents’ house, to stay at their home, go to the country club pool, eat too much candy, drink too much Coke out of glass bottles. It was the highlight of the year.

But there was a problem.

The house was a baseball wasteland. I had grown up watching the Red Sox and was then in the middle of an undistinguished Little League career and at that time my passions were stirred by little else. I was 12 when most of the kids on my team were 11, which meant I had physical tools they didn’t but with little idea of how to use them. I was strong enough to use the heaviest bat on my team and send a baseball over the fence and onto the bike path. My dad still insists I had my eyes closed when I hit my only homerun. Connecting bat to ball was always a complicated thing.

Ironing out those kinks in my game became a project for my dad and me. The two of us would throw the ball around when he got home from work, and drive out to a local high school baseball diamond on weekends where I could throw from a real mound.  Over many afternoons of practicing throwing and hitting and reading fly balls, I got better. He’d already had one hip replaced and the other ached, but when I took the mound he would crouch down and let me deliver 40 or 50 pitches.

That’s where the pop comes back. The sound that comes when the ball flies from the fingertips right and lands in the blackened broken-in center of the mitt. Pop. Whether it’s a good pitch or not doesn’t matter, because the sound tells you it is, and with each throw you seek to recreate it, the sound that echoes and then  swirls around in your mind each time you think of pitching.

But this time he didn’t come with us to Kentucky, so I’d have no practice companion. He might have been waylaid by work, or an appointment for his hip in Boston. Whatever the reason, I knew I would have no one to pitch to. What if all that hard work disappeared?

I wanted to be Pedro Martinez, the scrawny ace of the Red Sox, one of the best pitchers to ever play, who sometimes threw 99 mile an hour fastballs at batters’ heads to make it clear who was in charge.

Playing catch with my mother, which she sometimes did for me, was a long way off from this. My sister wasn’t an option, and neither were the grandparents. My grandfather certainly wasn’t an athlete. His idea of a workout was walking through the mall in tasseled loafers. He hadn’t even watched baseball regularly since Dizzy Dean stopped calling games in the 1960s. He hated the water and observed our swimming poolside in a blazer and slacks. He didn’t even pump his own gas.

I didn’t know it, but my grandmother was more promising. She had played basketball in high school when the sport, especially for girls, was hardly off the ground. In her 70s, she still played tennis several days a week in defiance of increasingly arthritic knees. Even if I had known these details, I doubt I would have asked her to toss the ball. She wasn’t what I thought of when I watched Pedro blow people away with fastballs and one of the best curves in recent memory, or cartoonishly muscled hitters smash homeruns out of big league ballparks.

I came prepared for baseball anyway, hoping there would be a chance to play ball. I brought my meticulously oiled and broken-in Rawlings fielder’s glove and dad’s tan catcher’s mitt, but they seemed like they would go unused.

I have no idea how it came up, but my grandmother proposed we throw the ball. My face must have been contorted into something that was equal parts surprise and horror. It seemed incongruous. Baseball was something I always did with my dad. Baseball was barely available for women to play. But I loved A League of their Own, a film about a women’s baseball league in the 1940s.

But this was my grandmother. My parents openly worried about her walking down the basement staircase. She didn’t pump her gas either. And here she was, insisting that we lob the ball back and forth. I didn’t think it would qualify as throwing the baseball. But I really did want to escape into a game of catch, to pretend I was Pedro, to hear the roar of a big-league crowd.

I said okay, promising myself to treat the session like gym class at school, where most of the kids couldn’t throw or catch: not stand too far away, and not throw too hard.

We took the Buick station wagon to Noble Park. I was dressed like it was a workout: Red Sox shirt, ball cap, batter’s glove on my catching hand. The imaginary crowd was ready to explode into a frenzy.

Grandma was not dressed for Fenway Park. She had a bulky brown wool sweater with turtleneck porting folded down. Her hands weren’t dexterous and long, but pointed and thick around the knuckles. The sun was low in the sky, the whole landscape coated in an amber light.

I stood close and threw gently. She did too, at first. Then she beckoned me to back up. Again. Then again. The ball picked up speed, became more live, wriggling through the air. She didn’t have a big-league arm, but the ball went where she wanted it to go, and it didn’t take a half hour to get there. Her elbow led her wrist just like it was supposed to, but her torso stayed locked. It was slightly mechanical, segmented into distinct parts. But it worked. She looked like a natural, someone who had hardly ever thrown a ball before, but could have been good if she had only had the chance.  Her throws were crisp. The red seams cut through the air with enough urgency and velocity to show it wasn’t a fluke.

Grandma could throw. She could catch, too. Kids at school were afraid of the ball, sometimes reaching as they pulled their head away. Grandma wasn’t intimidated. She kept her body still and watched the ball fly into the glove. Even practiced ball players drop balls when they use a catcher’s mitt that’s fat with padding. She didn’t, and told me I could throw harder. I felt that was true before the offer, so I reared back and hurled the ball at the target.

And there it was: POP. The sound I always thought of when I dreamed about being a big-league pitcher, the sound Pedro made, the sound of command and authority and confidence. Pop.

That sound overtakes the memory. I don’t know how long we threw the ball or who suggested we wrap up the session. Only that it ended quickly, but even when it did, I could still hear it.

That was the first time, and last, I threw the baseball with my grandmother. When I think of it now, it sometimes starts with a memory of my grandfather. He was sitting in his leather recliner with one foot on his ottoman as usual, telling stories about his father, as always. And then his speech faltered, and we all realized he was about to cry. He seemed to think his time was drawing short, and he wished he’d written his stories down, he said. Now he knew they would die with him.

It’s a funny thing how the senses can overtake a memory and shape and twist the past into something more than it was. But that’s why I tell this story now, of the afternoon I played catch with my grandmother. Because at some point time will stop for her, and for me, and memory will take what I have left of that afternoon, leaving behind a story, images of playing catch with my grandmother a small moment in the course of a life with no one to tell it, the ball in my hand, the ball in hers, the golden light of a late afternoon.

Image credit: “Don’t let anyone…” by carterse is licensed under CC BY-SA 2.0 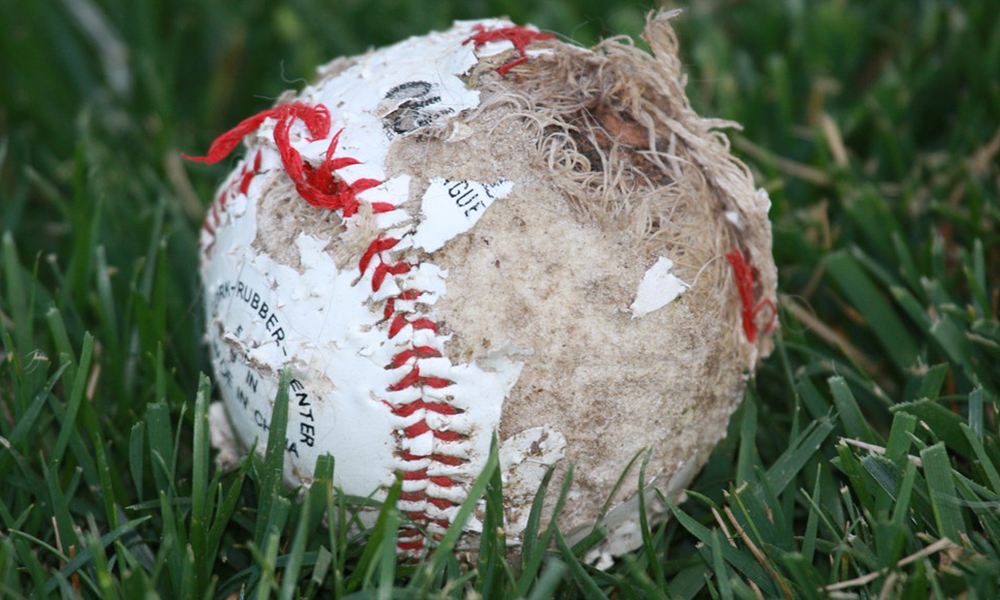