In early 2017, like everyone else I knew, I was miserable. I was reeling from the election. It seemed impossible to focus on anything other than the news, which only brought more misery. I was struggling in other ways, too. I was 24, and, though I’d been living in Minneapolis with my then-fiancée (now-wife) for more than a year, I was having trouble making friends in a new city. (Nobody warns you just how hard it can be for adults to forge new, meaningful friendships in new places.) I’d left a job I’d found meaningful but had disliked for other reasons. Now I was at a job I found meaningless and disliked for that reason. The bleak days dragged on.

Around the same time, miles away from me, in Washington, DC, three friends — Adam, Erikk, and Nick — started a podcast called The Relentless Picnic. The show is not well-known, but its fans are devoted — it was once even cited in The Paris Review, where one such fan, the poet and New York Review of Books senior editor Jana Prikryl, wrote, “their conversations cut at weird diagonals across the preening, pedagogical grain of standard podcast style.” Mira Gonzalez, a poet who lives in Los Angeles, told me it’s “like being in a class with three of the world’s best philosophy professors, except I’m the only student and we don’t have to follow any sort of curriculum.” Mark O’Connell, the Dublin-based author of To Be a Machine, praises the show for its “free-form” conversations and its “artful” construction, calling it “alive and volatile and open.” Ken Baumann, a writer and political organizer who runs the small publishing company Sator Press in Santa Fe, New Mexico, puts it like this: “The Relentless Picnic is the only podcast that makes me feel hope.”

The show’s genesis is inseparable from the election of Donald Trump. But the essential activity of the podcast — an expansive, irreverent style of joint inquiry — long preceded that cataclysm. The three friends met in college. Adam and Nick, who lived next door to one another, bonded over the experimental writings of David Markson and George Washington’s etiquette book. Erikk’s first recollection of Adam involved spotting his future friend nodding along with him while he had an impromptu debate with an outspoken Objectivist in the college coffee shop. Despite these early encounters, the three didn’t become close until years later, around 2008 or 2009. For much of the time between then and 2016, a central feature of their friendship was what Erikk called “doing the podcast without microphones”:

[S]itting around, having spiraling, freewheeling, big conversations, sometimes pinned to a media item, but very often not, going into comedy wormholes and exploring threads that seemed disparate and looking up words and places and going down internet wormholes together.

While Nick recalled telling Adam that he wished they had recorded certain conversations, like their discussions about Plato’s Cratylus and about Article Five of the United States Constitution, it was actually Erikk who suggested doing a podcast. The others responded enthusiastically. They felt that Trump’s election was a culmination of modernity’s worst ills and that it demanded a response, if only for the sake of their own sanity. “It suddenly felt,” Nick said, “like the amount of shit I was being asked to eat every day was quintupled overnight. And having a focused, dedicated place to metabolize that toxicity became pretty urgent to me.” The Relentless Picnic was born. They recorded, produced, and quietly released a pilot episode on Pizzagate and the structure of conspiracy theories. During the end of 2016 and the beginning of 2017, they released four more episodes before they began publicizing the podcast later that January.

It was in the malaised, shit-eating haze of early 2017, shortly after The Relentless Picnic’s premiere, that I began listening. Mary Duffy, a Denver-based editor of interactive fiction for Choice of Games, introduced me to the podcast. She later described the show as “people whose minds I trust — the way I trust my own — honestly postulating about things together.” The early episodes are fascinating documents of what it was like to live through the early months of the Trump presidency. The Picnickers chewed through it all, from Sean Spicer’s press conferences to Kellyanne Conway’s cable news appearances, with a mix of alacrity and despair that I wasn’t finding elsewhere. Take, for instance, the moment in one episode in which Nick prophesies the endpoint of Paul Ryan’s alliance with Trump:

I see Donald Trump careening over the guardrail into illegality, into authoritarianism, into totalitarian dictatorship, just so that Paul Ryan is dragged over the cliff with him, and Donald Trump gets to smirk into his disgusting, cheese-eating Wisconsin rat face once before they both splatter on the ground at the floor of the valley of history.

These words fade into Rachel Platten’s “Fight Song,” the famously inept soundtrack of the 2016 Democratic Party. I couldn’t stop laughing. It felt like undergoing an exorcism. But the Picnickers go beyond the explicitly political sphere. They ridicule the technocratic liberalism embodied by Mark Zuckerberg and Elon Musk and take aim at titans of center-left audio media — the very shows against which The Relentless Picnic defines itself. They excoriate Radiolab as a “slaughterhouse of shallow contentment” and decry NPR’s Marketplace as a propagator of neoliberal truisms in the guise of serious economic journalism.

For me, The Relentless Picnic was a balm. In a media landscape where everything else felt numb, a genuine conversation amongst long-time friends nourished my lonely spirit and offered me solace. If the show had been just that, it would have been enough. But it grew into something more.

“We started out trying to digest the toxicity of the news of the day,” Adam said, “but as we’ve gotten deeper into it, I feel like we’ve looked at other approaches. We’ve tried to find ways of getting at that bigger problem.” Erikk explained the bigger problem they want to address:

In a certain way the world became so infatuated with that way of thinking, in the Trump administration, that it really did feel like just responding to the state of the world — responding simply, in some more direct way, like we definitely do for many episodes — became part of the problem — or at least a schematized role in the problematic structures. So, rising above it in a way that sometimes obliquely deals with the goings-on of the world and sometimes straight-up avoids American politics felt to me more like a re-accessing of something important that was being threatened.

Thus came episodes on more idiosyncratic subjects. In one, the Picnickers analyze Redditors’ accounts of paranormal experiences (and, along the way, some of the pathologies of contemporary masculinity). In another, they ask what the decline of hitchhiking in America suggests about the state of our democracy (spoiler: it’s not good). They even take the show on the road — to Shanksville, PA, the crash site of United Airlines Flight 93 — to reckon with the memorialization of 9/11. Increasingly, the episodes unify seemingly disparate threads: for example, reactionary “prepper” culture, the ever-expanding Marvel cinematic universe, and the story of Kaylee Muthart, the young woman who clawed her own eyes out during a religious experience while high on meth, are threaded together into a meditation on American eschatology in an episode titled “Ragnarok.”

While the episodes’ subject matter and mode vary, they all illustrate conversation as a serious, subtle pursuit. Often, when we speak of “conversation,” we mean it in a superficial sense: people speaking in close proximity — the utilitarian expressions of “small talk” and “networking,” the kinds of “conversations” I was usually reduced to in my attempts to make friends in Minneapolis. It’s no accident that The Relentless Picnic‘s “lost episodes” (conversations pre-microphones) included a discussion about a Platonic dialogue, a form that embodies conversation as a serious philosophical project. In certain conversations, what’s said emerges not from the participants as separate beings, but from what happens between them. This is not our ordinary mode of interacting with one another. Social media amplifies the most reductive aspect of conversation — we focus on expressing ourselves at the expense of listening to someone else. But a listener of The Relentless Picnic, like the reader of a dialogue, is not only able to consider each speaker’s point in turn but is also able to linger in that contemplative space between speech acts, where the real, generative drama of conversation unfolds.

Part of The Relentless Picnic’s pleasure is that it encourages this thoughtful participation just as much through editing as it does through speaking. An episode’s unifying theme is not often immediately clear. It requires the listeners’ interpretive effort to work out. For this reason, The Relentless Picnic rewards repeated listens in a way that most audio content does not. “Podcasts,” Erikk said, “tend to be disposable slices of conversation.” But The Relentless Picnic aims not to be disposable. “We try not to just give people digestible bits that make it easy, make it quick, make it simple,” Adam said. The conversations are unscripted, but each episode is edited meticulously, with an ear toward how moments in conversations resonate with one another. Nothing is rushed; the podcast doesn’t operate on a strict schedule. When the Picnickers produce something they’re happy with, they release it. In between full episodes, they release “treats” on their Patreon, which range from material cut from episodes, to interviews with friends of the show, to heavily annotated recipes (for instance, a recipe for jerk chicken doubles as an essay on the origins of barbecue).

The podcast arises from a deep friendship between these three men, and by inviting their intimate dialogue into my eardrums, I came to feel as though I knew them. Of course, I don’t know them — at least not well. I do, however, follow them on Twitter. All three are active online and, as one might expect, open to conversations with fans. However, they are more private about their personal lives. They all preferred that I omit their last names. Adam and Erikk allowed me to include that they are in their 30s, but Nick wouldn’t reveal his age or his real first name. They’re open about the fact that the podcast is based in Washington, DC, but the three prefer to keep their professions unknown.

“The problem with getting into professions,” Adam said:

is that I take it as an essential aspect to our whole project that we are not coming at you like credentialed people, and I don’t want it to make a difference whether or not I have a PhD in being articulate and brilliant, or if I work at a donut shop. We’re trying to leave that realm, you know?

“The great joy of doing this,” Nick said, “is that you’re judged on your merits and not on anything else.”

I admire this. The democratic promise of social media has generally given way to a reality as credential-obsessed as the one that preceded it. Everyone obsesses over blue check marks, tallies of followers and faves, the names of legacy publications and well-endowed universities in their quippy bios. The Relentless Picnic aims at something different.

“What we really are talking about,” Erikk said, “is an ethics of thinking, going forward.” This language — about ethics, about thinking, about how to live — recurs frequently in the Picnickers’ response to my questions. That response, by the way, took the form of a recorded hour-long conversation, an unorthodox interview method that Erikk suggested. On the recording, they joke that they’re basically making a private episode for my ears only, and it’s true: what they send me is a discussion as riveting as any episode of The Relentless Picnic. Like the show, it’s rich enough to listen to over and over again — which I do, marveling at the consolation a simple act of dialogue between friends can make possible. 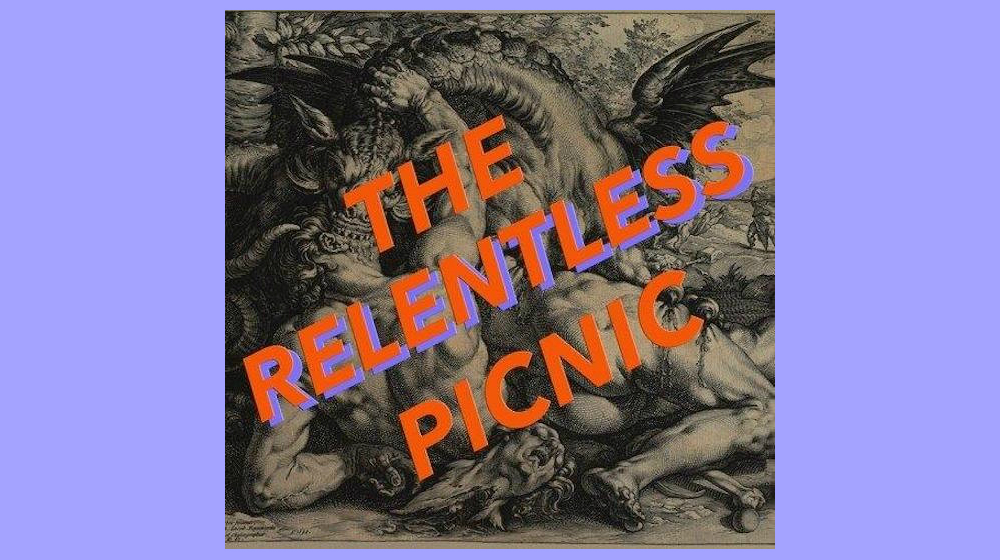