In recent weeks, the already beleaguered Trump administration has become embroiled in yet another complement of scandals. On May 9, in what is now ancient news, Trump abruptly fired F.B.I. Director James Comey, interrupting an ongoing F.B.I. investigation into possible links between Russia and the Trump campaign. It has subsequently been alleged that Trump had previously asked Comey to drop the investigation, what may constitute obstruction of justice if proven. On Friday, the New York Times also reported that in a closed-door meeting with Sergey Lavrov and Sergei Kislyak on May 10, Trump shared code word Israeli intelligence, referred to F.B.I. Director James Comey as “a real nut job,” and suggested that Comey was fired to alleviate “great pressure” on the administration.

While its various missteps have been unquestionably disastrous, the abortive attempts to deflect them have arguably been far more damaging. In the case of Comey’s dismissal, an initial narrative pinned responsibility on Deputy Attorney General Rod J. Rosenstein — as Sean Spicer quipped, “it was all him.” Though Trump himself cited Rosenstein as responsible for his decision in his termination letter, Trump later recanted, telling Lester Holt that he had planned to dismiss Comey all along. In a press conference on May 11, Sarah Huckabee Sanders was tapped to perform alchemy on the contradictory accounts: “The recommendation that [Trump] got from the deputy attorney general further solidified his decision and again reaffirmed that he made the right one.” Other explanations have been no less inane.

For many, the administration’s inability to present a cogent narrative on any sensitive issue smacks of a cover-up. As Richard Nixon’s lawyer John Dean observed in March, the administration is in “cover-up mode.” It is now clear that Dean’s statements were prescient; McClatchy reported on Friday that the probe into Russian collusion is now to include an investigation of conspiracy. With this development, along with the administration’s seemingly unending parade of deceptions, it is difficult to imagine a scenario in which there is nothing behind the obfuscation, though it remains to be seen whether the White House is hiding a bona fide conspiracy or merely a few banal infractions. Naturally, we may never know. Regardless, it has become clear that the Trump administration is profoundly challenged when it comes to constructing a decent narrative. Of any of its actions, this has arguably done the most to raise concerns of a plot. After all, what is a cover-up if not a good story?

Minimally, an effective cover-up is an occlusion of the truth behind a convincing counter-narrative. In those that work, the counter-narrative is so persuasive and the reality so unlikely that the veracity of the explanation goes largely questioned. In the Gulf of Tonkin incident, what many regard as a successful cover-up, the official narrative alleged that on August 2, 1964, the destroyer USS Maddox was fired upon by three North Vietnamese Navy torpedo boats. In this case, the narrative of the bellicose Viet Cong engaging the United States was far more compelling than what many (even President Lyndon Johnson himself) allege may have been a fabrication. In this case, the United States offered an account that was consistent, reasonable, and (perhaps most importantly) difficult to disprove. In comparison, the Trump administration’s flaccid attempts at denial and misdirection lack even the suggestion of plausibility.

While unfashionable in the academy, narrative theory provides a helpful lens through which to understand how the Trump team got this so wrong. A branch of literary theory that was first championed by Russian Formalists and later by French Structuralists, narratology holds that narratives are a universal currency whose poetic and discursive function is best understood through examining their structure grammatically. In his 1966 essay “Introduction to the Structural Analysis of Narratives,” Roland Barthes offers such a grammar with what he terms “nuclei,” the minimal elements of a narrative that give a plot its distinct shape. “A nucleus,” Barthes explains, “cannot be deleted without altering the story.” This is the crux of what has been lost on Trump — each story has a distinct profile that is constituted by its essential events. To change them is to tell a different story.

The implications of this becomes evident when one considers that Trump wove at least four different narratives concerning his relations with the Russians during his presidential campaign. The primary narrative that Trump relates in The Art of the Deal asserts that his Russian connections reach back more than 30 years to a meeting in 1986 with Yuri Dubinin, then the Soviet ambassador. Decades of business deals were to follow, including the Russian launch of Trump Vodka in 2007 and Moscow’s hosting of the Miss Universe pageant in 2013. Until 2015, Trump frequently praised Russia and spoke several times about meeting with Vladimir Putin. In an interview in 2014 with Fox and Friends, Trump said of Putin, “he contacted me and was so nice.”

In July of 2015, however, Trump introduced a second narrative, stating in an interview, “I think I’d get along very well with Vladimir Putin.” In his use of hypothetical language, Trump appears to imply that he’d never met Putin. He used similar language for the next several months, judiciously referring to Putin in putative terms rather than with specific claims.

In October of 2015, narratives began to collide. On October 6, Trump briefly returned to the first narrative in an interview with radio host Michael Savage, claiming that he met Putin several years earlier and that they “got along great.” Four days later Trump introduced a third narrative during an interview on Face the Nation in which implied that he met Putin, possibly for the first time, when they were both “stablemates” on 60 Minutes in 2013. Bewilderingly, he later noted in the same interview, “I would probably get along with him very well,” seeming to revert the second narrative. Despite this convergence, Trump repeated the “stablemates” narrative twice more over the next month. However, following attacks from Carly Fiorina and the press, Trump forever abandoned that angle, tweeting on November 13 that he never claimed to have met Putin as they had both been in separate pieces on 60 Minutes. This claim appears to constitute a fourth narrative in which Trump never met Putin and never claimed to have met him.

Trump maintained this position for the remainder of the campaign and following the election save for a brief, inexplicable return to the first narrative during an interview with Bret Baier on Fox News in May of 2016. In the interview, after being asked point blank if he’d ever spoken to Putin, Trump replied, “Let’s assume I did. Perhaps it was personal.” Trump quickly returned to his official campaign narrative and fervently maintained it over the next year, tweeting in January 2017, “Russia has never tried to use leverage over me. I HAVE NOTHING TO DO WITH RUSSIA – NO DEALS, NO LOANS, NO NOTHING!” In a news conference a month later, Trump reiterated that he was unconnected to Russia: “I don’t have any deals in Russia. President Putin called me up very nicely to congratulate me on the win of the election.” Here, Trump appears to insinuate that Putin’s congratulatory phone call was their first point of contact. This line, of course, has been called into question in recent days with allegations that the Trump team long knew of Michael Flynn’s associations with Russia and that 18 undisclosed contacts are to have occurred between the Trump campaign and the Russians between April and November of 2016.

In suggesting that after three decades of close association, business deals, and admitted involvement with Russia that there is no relationship and has never been one, Trumps fail to grasp that if there is an art of the cover-up, it is that narratives must be both plausible and resolute. On the first point, it is staggering how the Trump team has ignored both history and public record in their fervent denials. More significantly, in keeping a stable of conflicting stories that are brought out when convenient and then summarily retired, the administration has frittered away its credibility. Even if a narrative is imperfect, as government explanations often are, maintaining it tends to be preferable than abandoning it for a convenient alternative. Such willingness to forsake a story not only neglects the public’s capacity for judgment but also demonstrates magical thinking about the nature of truth.

It is yet unclear if there are limits to the administration’s neglect of coherency. Not only has Trump been willing to pitch astoundingly dubious narratives, he has also demonstrated the tendency to conscript others to weave them on his behalf, as Sean Spicer, Sarah Huckabee Sanders, and Lt. Gen. H. R. McMaster could attest. And yet, there may be inklings of fatigue among the GOP. Bob Corker (R-TN) recently noted that the administration was in a “downward spiral.” On the debacle over Michael Flynn, Rep. Mark Meadows (R-NC) opined that “It is important to get to the bottom of it.” It may be that Republicans are coming around to the fact that Trump’s fabrications have implicated the party in its descent and that verity is the only way up. 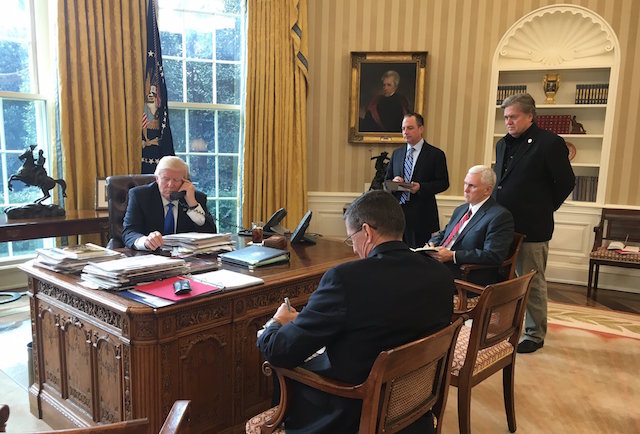