Filmmaker George A. Romero died earlier this month at the age of 77, following a career spanning six decades. While he continued to work well into his final years, and was even developing a new film at the time of his death, he will be remembered for his early projects: 1968’s Night of the Living Dead and 1978’s Dawn of the Dead. Produced in Western Pennsylvania on meager budgets and with largely local talent, the films are pinnacles of midcentury independent cinema. Wildly successful in their heyday, their influence has arguably only grown since their release; The Walking Dead empire, Sean of the Dead (2004), World War Z (2006), video games Left 4 Dead (2008) and The Last of Us (2013), and even Colson Whitehead’s high-concept literary thriller Zone One (2011) are all are indebted to Romero’s work.

Romero also deserves special recognition for his influence on horror’s social turn. With a few notable exceptions, horror films of the middle- and late-‘60s were generally limited to vampire sexploitation romps and Roger Corman fever dreams. Beginning with Night of the Living Dead, Romero demonstrated that the horror film could dramatize social issues and do so without the pomp or pretense of prestige cinema. He likewise established that a genre intrinsically concerned with exploring terror and aversion was equally as capable of addressing such relevant social issues as racism and social breakdown as it was with contrived ones. Along with Roman Polanski, Romero opened the door for a generation of horror filmmakers — Wes Craven, Tobe Hooper, and John Carpenter — to similarly explore increasingly weighty themes through the genre.

Horror’s social turn arguably continues with what some have called “post-horror,” convention-breaking, often politically-conscious horror films less concerned with terrifying audiences than with thematic development. The masterful Get Out (2017), It Follows (2014), Personal Shopper (2016), A Girl Walks Home Alone at Night (2014), The Purge trilogy (2013/2014/2016), and many others, have tested horror’s aesthetic constraints and pushed the genre toward the direct examination of racism, sexism, and economic inequality. Romero’s influence is palpable here as well. Like the director’s most impactful films, post-horror lingers on the dread of alienation, often borne out of racial inequality, as it follows characters through scenarios where their presence is called into question. Most of Peele’s Get Out is devoted to depicting Chris’s (Daniel Kaluuya) slowly building anxiety during a visit to his girlfriend’s parents’ lily-white suburb. The most captivating parts of The Purge: Election Year (2016) likewise concern an African-American store owner, Joe Dixon (Mykelti Williamson), and his Latino assistant Marcos (Joseph Julia Soria) fighting against the white, neo-fascist security forces protecting “The New Founding Fathers of America.”

Romero’s films are typically read as parables on collectivity and social dissolution — media theorist Eugene Thacker names “the working class, the mob, and the masses” as the filmmaker’s preeminent interests. And while these elements are certainly central to Romero’s work, the director also dealt no less powerfully with race, particularly notable for the fact that racial themes were still uncommon in films of the late-1960s, even in non-genre films, despite the ongoing Civil Rights Movement. As Get Out director Jordan Peele told the New York Times in February, “the way [Night of the Living Dead] handles race is so essential to what makes it great […] All social norms break down when this event happens and a Black man is caged up in a house with a white woman who is terrified. But you’re not sure how much she’s terrified at the monsters on the outside or this man on the inside who is now the hero.” As Peele suggests, Night of the Living Dead offers a nuanced and relevant depiction of racial issues, one made more astonishing by Romero’s insistence that such aspects of the film are unintentional.

In Night of the Living Dead, the positioning of the lone Black protagonist, Ben (Duane Jones), surrounded by exclusively white companions seeds the film with profound racial tension. Ben’s race is never discussed, yet it noticeably informs his relations with the other characters. Minutes in, Barbra (Judith O’Dea) attempts to flee the farmhouse and encounters Ben, having just arrived. For a brief instant, Barbra, her eyes bulging, begins to back away, appearing to be more afraid of the man in the driveway than the legion of zombies at her heels. The moment resolves quickly, yet it remains difficult to not read in Barbra’s subsequent comportment a tinge of lingering racial discomfort. With the appearance of additional survivors, Ben is repeatedly menaced by a machete-wielding Harry Cooper (Karl Hardman). It’s likewise hard not to regard Harry’s aggression, eye-rolling, and suspicion as racially motivated. Harry, conspicuously, is referred to as “Mr. Cooper”; nobody bothers to ask Ben what his last name is or what he does.

This tension culminates during film’s startling final moments. After surviving the night in the basement, Ben is shot by a passing militia. As he collapses, a militiaman mumbles, “Okay he’s dead, let’s go get him, that’s another one for the fire!” A series of still images follow depicting men dragging Ben outside with meat hooks. The last image is a bonfire burning in an open field. Viewed in political context, Ben’s death looks like nothing short of a lynching. Despite that this interpretation is supposedly not intended, in a film that churns with racial discord, Ben’s veritable execution inevitably casts Night of the Living Dead as a scathing commentary on white racism. As Peele observes, whether intentional or not, this treatment of Ben’s race is integral to the film and is effectively why it remains provocative and relevant in a contemporary filmic landscape closely attuned to race. Interestingly, the film’s conclusion bears striking connections to Get Out’s grim alternate ending. While the theatrical version of the film concludes with Chris’s rescue by his friend Rod (Lil Rel Howery), in the alternate ending, Chris is arrested. In a brief scene from prison, Rod begs Chris to recall details from the night that might help exonerate him. Chris, slumped in resignation replies, “I’m good. I stopped it.” He is then led away by a guard, presumably to spend the rest of his life behind bars. Like the conclusion of Night of the Living Dead, in this uncompromisingly bleak finale, the Black hero triumphs over a supernatural adversary only to fall victim to white authority’s tellurian reprisal.

Race is also an important aspect of Romero’s The Crazies (1973), a minor work virtually forgotten today, yet one that sees Romero continuing to develop his critical sensibilities. Set in a small Western Pennsylvania town in which a virus, “Trixie,” has turned the locals into violent maniacs, the film follows the ultimately doomed attempts of a firefighter to escape the military quarantine with his pregnant girlfriend. Ostensibly the depiction of the evaporating social order in a time of crisis, the film also addresses themes of racial inequality. At the film’s close, Colonel Chris Peckem (Lloyd Hollar), the military official tasked with managing the quarantine, is informed that he will be traveling alone to the site of a new outbreak. Haggard and cynical, Peckem listens as a distant superior reads him his orders: “Chris, I hate to drop this on you, but we’re taking you out. We’re sending you to Louisville…You have one under your belt now [heh]. You’re the only one to send in there.” Beneath the superior’s nervous chuckle, there is the implication that Peckem, who is Black, is an acceptable loss. The Crazies, for most of its running time, appears to have little to say about race. Yet this final moment returns to the mordant cynicism of Night of the Living Dead and its trope of Black disposability. With both conclusions, Romero seems to suggest that the presence of social order, an inherently thin proposition, is all that keeps racism and racist violence in check.

1978’s Dawn of the Dead, a return to form for Romero, took on a broader social critique than did his previous films. Funded with help from Italian director Dario Argento, who counted himself a fan of Romero’s work, the film follows a small coterie of reporters and SWAT officers as they attempt to wait out the zombie apocalypse in the backrooms of the Monroeville Mall. More on the nose than Romero’s previous films and with substantially more levity, Dawn of the Dead satirizes the hollow rites of late consumer culture. Philosopher and cultural critic Steven Shaviro observes of the film, “Even in death, [zombies] continue to enact the rituals of a rapacious, yet basically aimless, consumerism… [The zombie] circulates between work and idleness, or alienated production and conspicuous consumption” No longer representative of the chaotic upheavals and uncertainties of the late 1960s, here the horde signifies the hegemony of materialism.

Like Romero’s previous films, Dawn of the Dead also explores themes of racial alienation in its depiction of a lone African-American, Peter (Ken Foree). Towards the beginning of the film, as the group leaves Philadelphia by helicopter, Peter is asked if he left people behind. “Some brothers” he replies. Francine (Gayler Ross) asks, with phasing somewhat dismaying to modern ears, if he means “real brothers or street brothers.” “Both,” he says. He later shares that one of his “real” brothers is a professional athlete while the other is in prison. The moment is fleeting, yet it starkly delimits the racial divide between Peter and the other characters while highlighting the prejudices and polarizing inequalities of the fallen world. Other similar moments dot the film. In an odd sequence, Peter plays the waiter for an intimate dinner between Francine and Stephen (David Emge). Later, after the two begin a romantic relationship, Peter is shown playing racquetball alone.

Peter’s racial isolation is additionally accentuated by the film’s depictions of white militancy. A rural white militia swilling Iron City Beer and gleefully gunning down zombies appears at the beginning of the film while the third act is propelled by the frontal-assault of an armed biker gang. Despite that neither the militia nor the gang exhibit hate symbols, the film nevertheless seems to imply that the zombie apocalypse has liberated previously restrained expressions of white power. In a passing but iconic image of the film’s racial politics, the biker gang is shown hungrily ripping the pearls from the neck of an African-American zombie in a headwrap.

Directors and scholars of horror films are perpetually interrogating the genre’s utility. “What, as a genre, does horror do?” they ask. “And what is it good for?” While there’s hardly a consensus here, Jack Halberstam offers a persuasive reading of horror cinema’s core position: “horror film exploits the deviant often to suggest that the maintenance of anything like a norm comes at a price. An entire night world of deviants must be constructed in order to create a world which makes synonyms of normal and law abiding, to prop up these illusions of the just society.” Romero’s films seem to support Halberstam’s assertion in suggesting that the American society, whether overthrown by zombies or maniacs, was always driven by racism, violence, oppression, and rote consumerism. In his work, the surge of these elements following social breakdown illustrates that they were always permitted and never really resisted by mainstream society. Such a critique is also imbedded in Get Out, a film that uses the horror genre to posit the hypocritical racism of white liberal society. On this point, Romero’s lasting contribution to the genre, and to films like Get Out, is to show that horror need not be restricted to contrived threats. Rather, his work suggests that the anxieties and dangers already rooted in society are far more important, and usually more terrifying, than anything that can be invented. 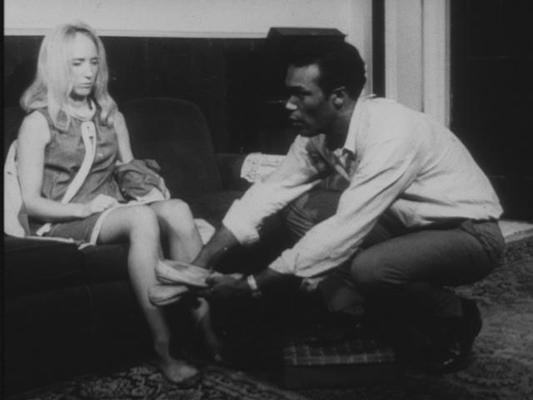