On August 11th and 12th, a white supremacist mob descended on the town of Charlottesville, Virginia, ostensibly to protest the removal of a statue of the Confederate General Robert E. Lee. The protest erupted into violence, culminating with one of its members driving a car into a group of counterprotesters, leaving one dead and many injured. “Sad,” Trump tweeted, “to see the history and culture of our great country being ripped apart with the removal of our beautiful statues and monuments.” Pursuing this line of thought, Trump wondered where this anti-monumental carnage was going to end: “who’s next,” he rhetorically asked, “Washington, Jefferson? So foolish!” 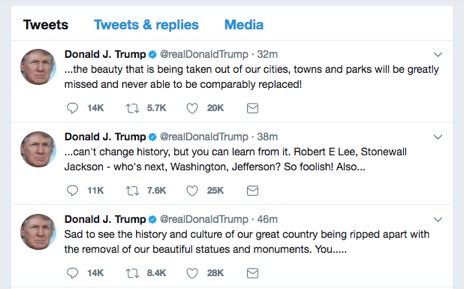 Many have rightly challenged this characterization of the removal of monuments as an erasure of history. As Roxane Gay aptly noted in the New York Times, Trump and others who reiterate this specious conflation would seem to believe that “books and museums do not exist.” But even if we set aside the fact that more books have been written on the Civil War than on any other subject in American history, there remains the crucial distinction between the aims of historiography and those of monumentalism that such defenses of Confederate monuments deliberately elide. While history is a field of contestation, monuments aim to resolve historical complexity into a single narrative that provides a basis for social and political cohesion. This is especially true of Confederate statues. Hardly bearers of historical truth, these were constructed as the monumental anchors of a resurgent white supremacist order following the abandonment of Reconstruction, and thus constituted visible threats to black communities.

If these facts have made it easy to take issue with Trump’s lament for the lost “history and culture of our great country,” critics have been slower to acknowledge the potentially sound logic embedded in his ensuing question: if we object to the statue of Lee, why not to those of Washington and Jefferson? The typical response  has been that these latter figures are different. Washington and Jefferson may have been slave owners, but unlike Lee they had other virtues; and while they founded the country in the name of freedom, Lee tore it apart in the name of slavery. But such attempts at distinction reveal a sense of history informed by monumentalism as well, only one that draws on a different set of figures. Jefferson, the actual architect of monumental structures at Monticello and the University of Virginia, was also deeply invested in the “political architecture” of what Sylvester Johnson has called “the white settler state.” Like the mob in Charlottesville last week, Jefferson openly espoused white supremacy and rejected categorically the notion of an interracial body politic. In these regards Jefferson was no mere owner of slaves, incidentally exploiting their labor and profiting by their sale as commodities, while otherwise laying the groundwork for some virtuous America of the future; he was the most prominent intellectual theorist of the white supremacist social order Lee later fought to uphold. As local activist Tanesha Hudson put it in an interview with Vice News, Jefferson’s presence looms at least as large as Lee’s in the town of Charlottesville: “You can’t stand in one corner of this city and not look at the master sitting on top of Monticello. He looks down on us, he’s been looking down on this city for god knows how long.”

It is perhaps all too obvious how Confederate monuments are born of and perpetuate an ideology of white supremacy, and in the wake of the events in Charlottesville we’ve seen an increasing consensus in favor of their removal. But Hudson’s remarks also suggest that this moment might offer an opportunity to reconsider even those monuments that may seem uncontroversial, and to reflect more deeply on the function of monumentalism within American culture more broadly. Consider, for example, a structure that is surely among the least controversial in the United States: the Lincoln Memorial in Washington, DC. Many will rightly associate this monument with the Civil Rights movement, recalling it as the site, most notably, of Martin Luther King, Jr.’s famous speech in 1963. But the monument was conceived less as a celebration of black emancipation than it was of white national reunion. Officially opened in May of 1922 — just two years before the Lee monument in Charlottesville — the Memorial’s dedication ceremony was racially segregated. While white Union and Confederate veterans stood side by side, black attendees were confined, as the Crisis magazine reported, to a seating area “a block away from the memorial in the grass and the weeds.” And though Robert Moton, head of Tuskegee Institute, was invited to speak, the program committee forced him to alter his intended remarks to bring them into alignment with the prevailing sentiment of the occasion. Moton’s original text would have excoriated the nation for its hypocrisy, ironically drawing on Lincoln to observe that it remained “half privileged and half repressed…half free and half yet in bondage,” but this critical perspective would be foreclosed by the ceremony’s overriding commitment to the project of reconciliation and reunion.

This focus on reunion as the legacy of the war is encapsulated in the dedicatory text above Lincoln’s monumental marble head:

The inscription both emphasizes union over emancipation and begs the critical question of “for whom,” exactly, the Union had been saved. Similarly, when Trump laments the loss of “our history” the possessive pronoun does a great deal of ideological work, since the meaning of “we” — and not some abstract ideal of “historical” truth — is what is always at stake in these constructions. Just as the Lee monument and the mansion of Monticello articulate a white historical narrative at the ongoing expense of black Americans, so too does the Lincoln Memorial dispense with the unfinished business of emancipation by refocusing a white-centered body politic on a shared sense of an exceptional past and a providential future.

One might argue that the image of King at the Memorial effectively reclaims it for a narrative of liberation. But has this really been the case, or has the appropriation actually worked in reverse? Just as the Memorial solidified the transformation of the once controversial Lincoln into a figure of national consensus, so too has King been rendered entirely uncontroversial. The Republican Party — which supports voter suppression laws and routinely polls in the single digits among African Americans — self-identifies as the “Party of Lincoln,” and not even Donald Trump will speak ill of Martin Luther King, Jr. While King, like Moton before him, stood on the monument to emphasize the unfinished business of emancipation, both men have been assimilated to the progress narrative of unification that the monument was designed and continues to embody.

In these regards the Lincoln Memorial is the most visible and venerated anchor of what David Blight has called the “reconciliationist” narrative of Civil War history, which worked in concert with a more overtly “white supremacist” narrative (exemplified by Confederate monuments) to triumph over an alternative narrative of emancipation. This reconciliationist narrative has allowed for the “both-sidesism” on display not only in Trump’s egregious equivocation regarding the violence in Charlottesville, but also in the sort of defense he has continued to mount for Confederate monuments themselves.

I am not advocating the destruction of the Lincoln Memorial, nor do I mean to imply an equivalence between Lincoln and Lee (or even Lee and Jefferson). But I am suggesting that, in the time of Donald Trump — who literally made his fortune building monuments to himself — we might reconsider the nation’s larger commitment to the monumental celebration of “great” white men altogether.

Monumentalism not only insists upon a mythic version of the past, but projects the permanence of the culture that created and profits from those very myths. As a counterpoint, we might instead adopt what art historians and architectural theorists have called a “countermonumental” approach to the problem of historical memory. As Quentin Stevens, Karen Franck, and Ruth Fazakerley have summarized, “countermonuments” either engage dialectically to undo the authority of existing monuments or reject and undermine the aesthetic techniques and ideological underpinnings of monumentalism altogether. For an example that serves both functions in direct relation to the issue at hand, consider Kara Walker’s installation, A Subtlety, which for a few months in the summer of 2014 stood as one of the most prominent memorials ever constructed to enslaved people in the Americas. The installation, situated within the abandoned husk of the Domino Sugar Factory in Brooklyn, consisted of an array of sculptures of enslaved black children, all positioned around the monumental figure of an African American woman crouched in the form of a sphinx. Both the sphinx and the children were rendered in varieties of sugar that over time flaked off, melted, fractured, and fell apart, while the building itself had been slated for demolition later in the year. Altogether the installation presented a powerful critique of the history and legacy of slavery, as well as of the monumental culture that distorts and elides that history while perpetuating a mythic version of the nation’s past. As opposed to the bronze and marble from which statues of white enslavers and emancipators alike are cast, Walker rendered her monument to enslaved people from the decaying material residue of their labor, and placed it within a crumbling ruin of the industrial capitalism that labor fueled. This formal embrace of the material over the mythic, of transience and disintegration, resisted monumentalism’s assertion of the dominance and the permanence of the culture that insists on endlessly constructing such monuments to itself. 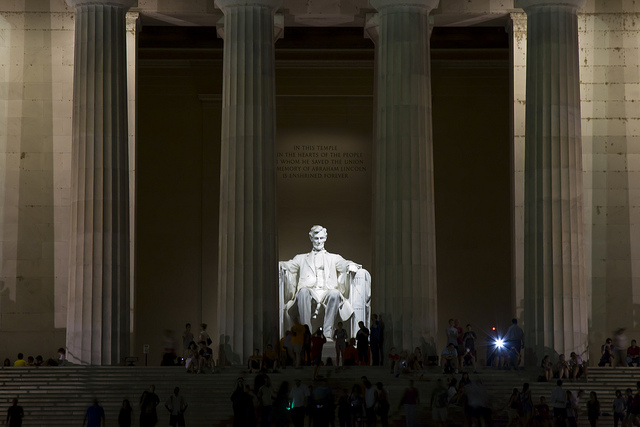