On June 6, 1966, Sidney Street, an African-American veteran of World War II, sat in his Brooklyn apartment listening to the news on his radio. He heard that the civil rights activist James Meredith had been shot by a sniper. Street took his 48-star American flag out of a drawer, carried it out to Lafayette Avenue and St. James Place, laid a piece of paper on the sidewalk, and keeping the flag properly folded, lit it on fire. He never let it touch the ground. A small group of people gathered around him, and when police arrived, they heard Street say, “If they let that happen to Meredith, we don’t need an American flag.” Street believed in the flag as much as did the people who soon sought to punish him, or his action would have lacked significance.

Fifty years after the American counter-culture first made widespread issue of its burning, does the American flag still inspire passion for or against what it represents? Do we believe in it enough to exert our differences on its body, or does the American flag fail at the “crucial test of the success of a national symbol”? Does it or does it not, as Pål Kolstø wrote in the Slavonic and East European Review, “unite the people and bolster their loyalty towards the state”? On July 4, 2017, the satirical news organization the Onion posted on Instagram a photograph of the flag with the caption, “U.S. Flag Recalled After Causing 143 Million Deaths.” Responses came from one of two perspectives, both of which indicate the failure of the American flag to unite its associates under any metanarrative: the flag is either a negative or positive symbol and those who do not think as does the person commenting should change their minds or disappear.

The metanarrative of the country is what is at stake when we discuss the flag. Even the failure of the flag as a national symbol — should it be possible to deem it done — would be a part of the brief representational repertoire of the United States of America. If the flag can no longer hold — or be deemed never to have held — what John Hutchinson called the “different visions of the nation” together, then its 13 stripes and 50 stars — let alone the country — need redesign. It is time for American residents to think together about what’s next. This is part of what artists do. Artwork processes cultural critique, develops new languages towards that end, and, even as it reflects the present and mines the past, can envision the future.

When Jasper Johns dreamed his first flag painting in 1954, critic Robert Hughes asked, “Is this a flag or a painting?” Taking up the entirety of its rectangular frame, the painting essentially tests the notion of the symbol as a created thing. One can salute this painting — it is indeed a flag — and yet in its layers of newsprint, if not already in its nature as a painted thing, it states its case for the many ambiguities held within the category of created objects that are the emblems of a state. Acknowledging that a symbol is a representation and not the thing that it represents is the first step in any act of tribal disbelief.

On June 14, 2017 — Flag Day — the public art commission Creative Time raised a flag on top of their headquarters in New York City. Designed by Marilyn Minter, the banner reads “RESIST” in a script that appears to be dripping paint, the contours of which are filled with Minter’s signature foggy photographic imagery. Minter’s initiated a serialized release of 16 flags designed by as many artists. The flags each represent “an issue the artist is passionate about,” as with Latoya Ruby Frazier’s focus on Flint, Michigan’s man-made water crisis, for example.

The diversity of commitments represented in the 16 flags commissioned by Creative Time suggests — often with words and sometimes with symbols that require extravisual literacy — some but not at all all of the unresolved projects of the United States of America today, as well as of the notion of the nation-state in general. Together in a boxed set available for purchase through the retailer Opening Ceremony or pictured on Creative Time’s website, the flags are seen as a group, but IRL, they fly one at a time in succession. They also, in July, began to fly at other cultural institutions nationwide, creating an ad hoc network. One by one, then, over time and space, the fabric flags pose fluttery questions of ideological adherence. Indeed, the project is called overall, “Pledges of Allegiance,” and the plurality of that first word is part of their point.

Flags represent any number of imagined communities, and summon and exclude by virtue of their flock. At its most basic, Creative Time’s project pits the one (absent) American flag against the many flags of those who recognize the problems of the country in the name of which the Flag has flown. The project seems to say: at this time, if not forever, formally, we need to see other flags that more truly represent the issues of various stakeholders in this tribally networked landmass we call the United States.

Two other recent artworks, John Gerrard’s Western Flag (Spindletop, Texas) and Paul Chan’s De Se Moerae also speak to America’s constituent conflicts without relying on the American flag’s constituent formal parts. Gerrard’s was commissioned to mark Earth Day, April 22, 2017, and is a live simulation depicting the site of the “Lucas Gusher” — the world’s first major oil find — in Spindletop, Texas, in 1901. Gerrard’s team used a drone to survey the landscape, rebuilt it as a virtual world, inserted a flagpole as a virtual object, and animated the top of this flag as if pressurized black smoke were constantly issuing forth in stripe-like gusts, sans stars. The piece visualizes what we cannot necessarily see: atmospheric levels of carbon dioxide and the relationship between oil and territory. Gerrard says, “The Flag that I’ve produced is a revealing flag for [the] legacy of our comforts.”

Paul Chan’s De Se Moerae is a “breather,” as he calls it: nylon tubes are animated by big, noisy fans, recognizable from the sort of cheap inflatable air dancers we see advertising retail offerings in public space. De Se Moerae is three white bodies, two of which are shaped such that they resemble KKK costumes, and a third of which wears a pale blue smock. They “dance” around a black flag on a black pole. The conjunction of heavy associations the retail context, the KKK, and the flag somehow lightheartedly conjures the notion of a kind of patriotic ring dance, from which participants are unable to tear themselves away. The title of the piece refers to the Moerae, or the Greek fates: three white robed women who assign and ensure the destiny of gods and humans. Here, then, the flag is a dark center of power, tying capitalism, patriotism, and white supremacy together as a fated triumvirate that we might perhaps deflate only if we unplug.

So the flag as conceived by Creative Time’s commissions and Gerrard’s and Chan’s artworks is a locus of criticism. These are not visions for a new Flag, nor are they false parallels to the Flag; for these artworks, a flag is a body through which to posit problems and communicate opinion. This is not to say that no artworks are currently at play that contend with the actual American flag. In the first half of 2017 in Los Angeles alone, multiple iterations of the American flag have been exhibited: the metaphorical negative side of the flag is shown through medium-specific inversion, race or identity is addressed through coded materiality, or the construction and destruction of national symbols is revealed as a feedback loop. None of these artworks are particularly visions forward, nor re-designs; they are not revolutionary. Instead, they use the existing American flag as a working site, a work in progress, a symbol to be, at the very least, handled, if not deconstructed.

If, in the art context, Johns’ was the first to call a flag a flag, artists today are diluting the power of that flag by, at turns, deconstructing and diversifying its purchase on the seat of symbolic power. The American left wing gave up the flag in the late 1960s, planting it squarely in the hands of the right’s notion of what is this country and who belongs here. If the right calls the left politically correct, the right has become stuck too in the patriotically correct, and has forgotten what Frederick Douglass reminded his audience the day after Independence, 1852: that the country was founded on the notion that dissent — first reasonable and then resolute — defines the American patriot.

Perhaps the artwork of the recent past that best articulates both tired faith and criticality is William Pope L.’s Trinket, exhibited at MOCA Geffen in Los Angeles in 2015 but created and first shown in Kansas in 2008, just before the election that Barack Obama would win. Trinket is a 54 x 15-foot American flag, hanging on a pole in theatrical lighting, blown by four large-scale industrial fans. The scale of the flag and the cinematic nature of the staging indicate the enormity with which the symbol dominates cultural consciousness, and dominated especially conversation around Obama’s patriotism during his campaign, regarding the consistency with which he wore a pin of the American flag. What is an American? Who is an American? The rigor with which Pope L.’s flag is whipped and the potential of its fraying under such duress, implies some faith that the symbol still stands, still stands for something, and that in fact what it stands for is its tests. Trinket implies that the constructs of this country are worthy of dissent, not on behalf of its landmass, leadership, or legacy, but on behalf of those who must live in relation to its future. No symbol is more precious than the community it purports to represent, but before we retire the American flag, can we take it back? 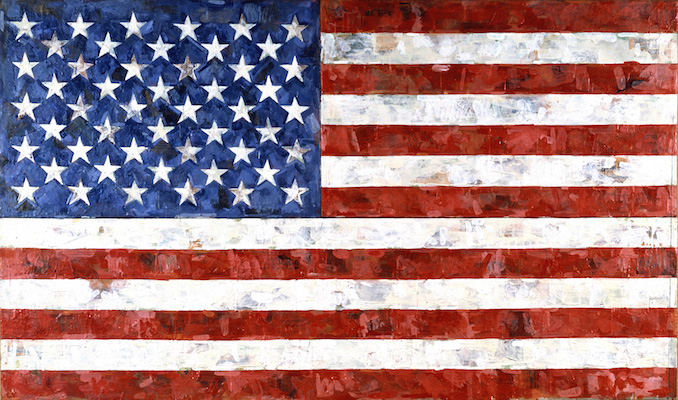