I first visited Berlin in March 2008. The highlight of my trip was the Alternative Berlin Tour. I found the flyer in my hostel; it described itself as an “anti-tourist tour.”

We met under the television tower in Alexanderplatz at 9am. The tour guide was Australian, a stout man with thinning blonde hair. He had been living in Berlin for eight years. It was me, a Brazilian guy, and four Spanish girls. One of the Spanish girls had blood-red hair; the Brazilian wore a blue trench coat; I had a moustache.

The Australian told us that the tour would continue as long as someone bought him beer. We bought him beers and the tour lasted more than eight hours. We visited artists’ studios in the Tacheles building; we illegally mounted a section of the Berlin Wall; we broke into an abandoned prison and climbed onto the roof to watch the sunset.

Along the way we stopped at numerous street art installations. They were everywhere: on walls, on sheered sides of buildings, wrapping around whole apartment complexes: colorful, political, irreverent. I had never seen anything like it. I took tens of terrible photos to show family and friends.

A few years later Exit Through the Gift Shop came out and suddenly everyone with a stencil and spray paint thought they were Banksy, and social media gave aspirants a platform to distribute their work globally with the meme as their conceptual framework. But at the time, it was pretty unique: a city draped in public art to brighten the day of pedestrians and residents, to give fresh stimulus to dull buildings.

Every time I stumble upon one of these murals or buildings I am always a bit amazed to find this fugitive artifact of memory disinterred from the phantasmagoria of impression. What then seemed so radical is now in the most generic and sterilized neighborhoods of Berlin, places I try my best to avoid. The Tacheles building, which I returned to after the tour and where I happened upon an impromptu concert in an artist’s studio that shocked my somewhat provincial perception of things, now sits empty, awaiting demolition and conversion to condominiums.

Street art was “discovered” and now covers every city with pretensions to cool. Developers use it to raise real estate prices; some artists are happy to go along, others keep their distance. What once appeared as semi-anonymous benevolence on the part of its creators now seems like an intentional act of brand building. Much street art I see today operates at the nexus of tired clichés and exhausted ideas. It sadly waits for someone to take its picture, unable to conceal its lack of joy and hollow origins.

And now it has been institutionalized by Berlin’s city government as the “Berlin Street Art Festival,” undoubtedly the brainchild of some mid-level bureaucrat tasked with dreaming up schemes to financially capitalize on Berlin’s accrued social capital. Street art is hardly alone in this regard. The city’s flourishing gay life became “Berlin Queer Days” this past summer.

All of these city-run festivals take place in Potsdamer Platz. Once the bustling center of Second Reich and Weimar Berlin, it became part of the dead zone between east and west after the war and was subsequently rebuilt as a corporate playground of malls and office buildings. There is no reason to go there except to visit the Arsenal, the best movie theater in the city. Once, with a few hours to kill before Rossellini’s Journey to Italy, I wandered over to “Berlin Queer Days.”

Except for, maybe, the sponsorship of Boner Magazine, there was nothing particularly transgressive about it, nothing that a conservative Bavarian would find especially disagreeable. There were many families of tourists. There were teenage girls dancing to techno while their parents watched from nearby picnic tables; occasionally one of them seized up in a moment of self-awareness and started laughing. I didn’t see overt displays of the queer culture the event was supposedly celebrating. Some of the food vendors, the same vendors that are at every one of these festivals, put up rainbow flags or wrapped their stands in tinsel. Perhaps the bratwursts were gender non-conforming.

Everything that is unique or special about a place must be repackaged and sold as something “unique” or “special” about a place, must become a simulacrum of itself. My second trip to Berlin was in July 2013. It was my girlfriend’s first visit so we decided to do the Alternative Berlin Tour. It had since grown in popularity and there were now so many people under the television tower at Alexanderplatz that we had to be split up into smaller groups between several tour guides.

Our tour guide was a tall Englishman with long blonde hair who had a bad hangover and was not doing a good job of hiding it. We walked around a few neighborhoods, stopped at points of interest and looked at street art, no longer alluring and unique to Berlin as it once was. We didn’t break into abandoned buildings or talk to artists or drink beers before noon. The guide was not too garrulous and seemed eager to get back to bed. The tour ended after a few hours, before lunch. Even the tour had become a simulacrum of itself, an “alternative” Berlin tour. 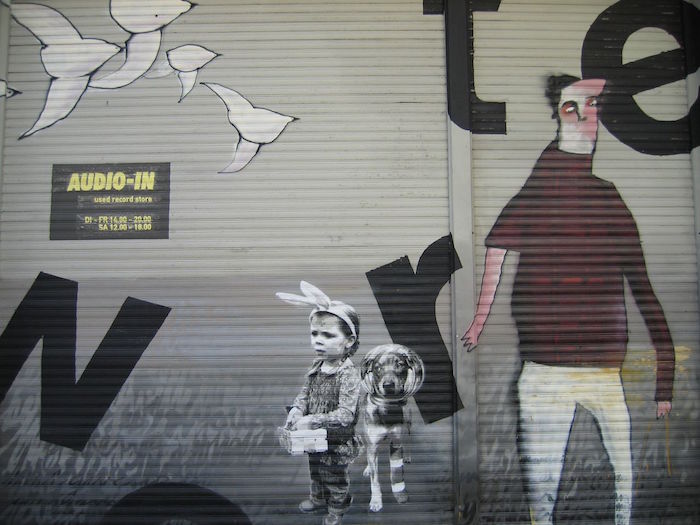