Who exactly is the ideal citizen, and what is the preferred shape of the head-of-state? For centuries in the West, these roles have been mostly limited by the body, and by one specific kind of body: male, white, and guided by a certain sense of ration, moderation, and self-discipline. “You have often heard him compared to Cincinnatus,” wrote the French revolutionary Jacques-Pierre Brissot de Warville in 1788, after meeting George Washington. “This comparison is doubtless just.” Once established, certain ideas can be hard to shake; the American president, like the Roman senator-general, should portray himself as a virtuous pater familias.

How times have changed; the alt-right’s masculine ideal is one of aesthetic and intellectual extremes, and this is perhaps the first time “Donald Trump” and “self-discipline” have been paired in a sentence. Though slapdash internet figures like Milo Yiannopoulos have, for months now, admiringly referred to Trump as “daddy,” the figure he cuts is one of irrationality and excess in all its forms. There are the gilded living quarters (“The best aesthetic descriptor of Trump’s look,” pointed out a March Politico article, “is dictator style”), the policy decisions affected more by mood swings than research, the body gone completely to seed. He is Cincinnatus in a funhouse mirror, stretched and malformed and misshapen into a reactionary maleness that threatens as much as it preens.

Earlier this month, the Atlantic pointed out Trump’s resistance to exercise in comparison to prior presidents. “A commitment to working out,” writes Stephanie Hayes, “suggests self-control, discipline, and a willingness to exert oneself in pursuit of a goal — ideas that align with the good old-fashioned American belief in meritocracy, however illusory.” It also suggests a moral fortitude born from ruling over the body, rather than being ruled by the body, or the classical version of femininity, in which our wandering wombs essentially make us unfit for the public sphere. Past presidents have indeed made a point of portraying themselves as contemporary exemplars of Thomas Jefferson’s beloved gentleman farmer trope, like Ronald Reagan on horseback or Teddy Roosevelt’s love of hunting. Trump, however, is different: “the man who promises to make America great again,” writes Hayes, “publicly revels in his sedentariness and poor eating habits […] He once described giving speeches on the campaign trail as exercise.”

What is interesting about this is that the most ardent of Trump’s followers — the white nationalists, men’s rights activists, and assorted other extremists that make up the alt-right — are awash in anxieties concerning the male body and sexuality, however much they try to deny it in long comments detailing the supposed prowess of the “alpha male.” Men’s rights forums like Reddit’s RedPill, the gateway drug for so many alt-right strains of thought, are filled with young men detailing their workout regimes or lack thereof (“Do you lift?” is a meme deployed both sarcastically and seriously), but even their approach towards exercise leans towards the extremist end of things, fetishizing the body in a way that’s out of step with prior schools of thought concerning citizenship and sexuality. It’s not uncommon to see posts discussing the bodies of ancient Roman gladiators or using “gladiator” as a compliment, a reference that seems to completely overlook the uneasy relationship some Romans had with the bloodsport. (“Why,” wrote Seneca, “do you think that I say that I personally return from shows greedier, more ambitious, and more given to luxury, and I might add, with thoughts of greater cruelty and less humanity.”)

Sexual insults pervade the forums. “Cuck,” and its variation “cuckservative,” explains the Southern Poverty Law Center’s Hatewatch, “aims to depict conservatives who don’t kowtow to ultra-right political views as inept traitors to the conservative base that elected them” using imagery borrowed from often racist cuckholding pornography. In an October profile, nationalist Mike Cernovich uses the term “basic bitch” to describe anything and everything he dislikes, from George Soros’s son to his own unborn child. (Unsurprisingly, he also created a series of workout-themed YouTube videos in 2014 dedicated to achieving an “alpha male posture.” “When you use alpha male body language,” reads the accompanying blog post, “you lower your cortisol and thus raise your testosterone levels.”) On election night, a comment in a private Facebook group dedicated to the alumnae of my alma mater described the scene at Trump’s victory from the perspective of a journalist reporting it, complete with young men in red caps jostling and snickering to one another that Trump was running late because he was too busy “fucking Melania.”

Trump, too, has indulged in this posturing. “And he referred to my hands,” he said during a March 2016 Republican debate, responding to a taunting Marco Rubio. “‘If they’re small, something else must be small.’ I guarantee you there’s no problem. I guarantee.” “Donald Trump Defends the Size of His Penis,” blared a CNN headline later that night, a definite shift away from the polite, discreet genitalia of Greek statuary depicting gods and heads of state.

But for all the alt-right’s devotion to “daddy,” there’s an element of patricide at play. Cernovich, in the New Yorker’s profile of him, sneers at the “paternalistic” media, while the captions of various “Twinks 4 Trump” social media accounts invoke “daddy” with a cruelly sarcastic sneer. The point is not necessarily to frame Trump as a father figure, but to disrupt; like all online trolling, the argument does not matter, only the reaction it provokes. The angrier and more serious the reaction, the happier the trolls. Then again, “daddies” — the word slithers — are having a moment, from the sugar baby websites popping up everywhere to the half-pleading comments of “dad” and “daddy” left on male celebrities’ Instagrams by teenagers not entirely in control of the sexual dynamic they’re tapping into.

Father no longer knows best, though. Trump and the alt-right, tied as they are to a bloated ideal of masculinity and the corporeal male body, have little in common with the old tropes of heads of state acting as wise fathers for their kingdoms. Instead, Trump taps into another old fear, that in which the body and health of the monarch correspond to the health of the nation. The Fisher King was stabbed in his groin. “I sat upon the shore,” begins the last stanza of T.S. Eliot’s The Waste Land, told from the perspective of the Fisher King. “I sat upon the shore / Fishing, with the arid plain behind me / Shall I at least set my lands in order?” His body, absolute, is dying. L’etat, c’est moi. America, it’s Trump. 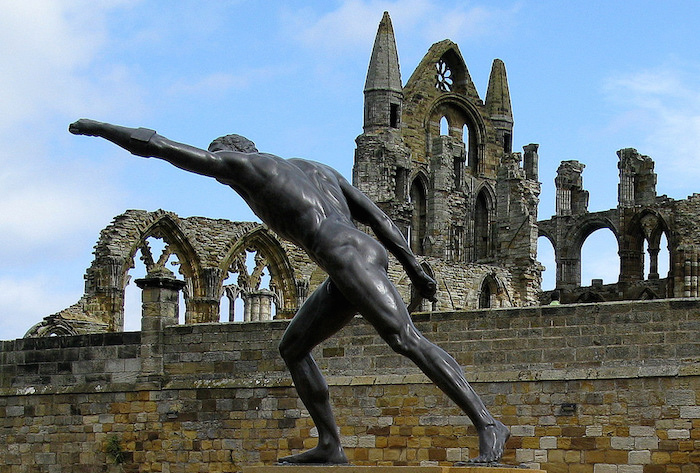