The minute I laid eyes on the photograph of Al Franken poised to grope Leeann Tweeden’s flak-jacketed breasts, another image leapt to mind — that snapshot of Specialist Sabrina Harman giving the thumbs-up over the bruised iced corpse of Manadel al-Jamadi at Abu Ghraib in Iraq in 2003. I know this is an invidious comparison, but I can’t help it. I can’t get it out of my head.

Let’s start with the basics. The colors are strikingly similar — pale military green, brown, black, and various skin tones. The two settings share a quasi-military vibe. Both photos have a similar composition. The torsos of both alert subjects lean in from the left side of the frame, while their heads turn to look at the camera. The two pictures were taken in the early years after September 11, and not far from one another geographically. The Franken picture was shot in a C-17 cargo plane in the air over Afghanistan in 2006; the Abu Ghraib snapshot was taken in a military prison in Iraq in 2003. Both pictures involve unconscious subjects. Then, of course, there are those damning hands and faces: Al Franken is leeringly groping or mock-groping Tweeden; Sabrina Harman is smiling and giving a thumbs-up over a murdered man on ice. Both gaze happily, humorously, even proudly, at the camera.

These pictures are in effect assisted selfies before selfies were even a thing. They were done, it appears, in cahoots with the photographer. The smiling subjects face the photographer, knowing, perhaps even hoping, that every nuance is being caught. And so the two photos also share a distinctive twist: Franken and Harman are both half-turned toward their prop (the inert body) and half-turned toward the audience (us). Twisted posture; twisted humor. Both unintentionally convey that the alert subjects were not at all alert to the fact that they were doing anything wrong. Indeed, both pictures suggest that the smiling subjects were consciously exerting their peculiar brands of humor.

In the photograph of Tweeden, Franken — whose best-known comedic personality on Saturday Night Live was Stuart Smalley, a man in a fuzzy light-blue sweater who is always trying to convince himself that he’s good enough and deserves good things — is shown eagerly grabbing for two of those good things. And Harman — who once had her dead kitten in Iraq stuffed and given pebble eyes so she could film it, as The New Yorker reported, “in various inventive settings: on a bus seat with sunglasses, smoking a cigarette, wearing a tiny camouflage boonie hat, floating on a little pillow in the wading pool, with flowers behind its ears” — shows a similar sick, dark humor toward the dead man. The corpse plays the role of the dead kitten.

Of course, there are plenty of differences between the photo of Franken (who had not yet run for the Senate when the picture was taken) and the snapshot of “the ghoul next door,” as Harman came to be known. First off, the occasions: The Franken photo, taken during a 2006 USO tour, is of two entertainers, one awake and one asleep. The Harman photo is of a military specialist in a prison over the body of prisoner who died in military hands. They are both painful to look at, but for different reasons. The Franken photo makes you cringe at what he thinks he’s getting away with. The Harman photo makes you shudder at the many levels of depravity and inhumanity depicted.

Of course, the biggest gulf that separates these two photographs is their two histories.

Here is how Tweeden recalled the events leading up to the photograph of her sleeping self taken at the end of a USO tour where she and Franken performed together: Franken had written a comic skit for them both that included “a moment when his character comes at me for a ‘kiss.’ […] On the day of the show Franken and I were alone backstage going over our lines one last time. He said to me, ‘We need to rehearse the kiss.’ I laughed and ignored him. […] He continued to insist, and I was beginning to get uncomfortable. […] I said ‘OK’ so he would stop badgering me. We did the line leading up to the kiss and then he came at me, put his hand on the back of my head, mashed his lips against mine and aggressively stuck his tongue in my mouth.” After that, Tweeden remembers, “I avoided him as much as possible and made sure I was never alone with him again for the rest of the tour. Franken repaid me with petty insults, including drawing devil horns on at least one of the headshots I was autographing for the troops. But he didn’t stop there. The tour wrapped and on Christmas Eve we began the 36-hour trip home to L.A.,” she wrote. “After 2 weeks of grueling travel and performing, I was exhausted. When our C-17 cargo plane took off from Afghanistan I immediately fell asleep, even though I was still wearing my flak vest and Kevlar helmet.”

It was only after Tweeden returned to the US that she discovered the picture of Franken and her while “looking through the CD of photos we were given by the photographer.” As she told KABC news radio in Los Angeles where she is a news anchor, “I couldn’t believe it. He groped me, without my consent, while I was asleep. […] I felt violated all over again. Embarrassed. Belittled. Humiliated.”

The photograph of the dead man has, of course, a grislier backstory. During an interview with Errol Morris, published in The New York Times, Harman remembered the events leading up to the thumbs-up shot, taken in Abu Ghraib prison on November 4, 2003: “Captain Brinson had a meeting in the main office with all of us. He said there was a prisoner who had died in the shower, and he died of a heart attack. And he told us that he was on ice, and he was in the shower in tier 1B. […] Sergeant Frederick got the key and we just checked him out and took photos of him. Kind of realized right away that there was no way he died of a heart attack because of all the cuts and blood coming out of his nose.” At a later point, Harman had a second encounter with the bruised corpse, which was described by Morris: “Specialist Sabrina Harman and Cpl. Chuck Graner […] let themselves into the 1B shower room and took the two thumbs-up photographs with the corpse. […] They left, locked the door, and then Sabrina returned with Frederick later that evening (Nov. 4) and took additional photographs of the corpse, some 14 or 15 of them.” At this point, Morris suggests, rather improbably, Harman was actually trying to do forensic work. This leads to another key distinction. While it is the “victim” of the Franken photograph who tells the tale of its making, the victim of the Harman photograph cannot speak; he’s dead.

Not surprisingly, the punishments for the smiling bad actors in the two photographs were quite different too. Specialist Harman was investigated, tried, and ultimately convicted by a panel of four Army officers and four senior enlisted soldiers of one count of conspiracy to maltreat detainees, four counts of maltreating detainees, and one count of dereliction of duty. She was sentenced to six months in a military prison. As for Franken (who became a Senator after the photo was taken), he himself asked for an investigation of his own conduct but was not charged or investigated for a crime. Still, he resigned as a US Senator under pressure from his colleagues. His political career is likely over.

Finally, there is a circumstantial difference: While the Harman picture is just one item in a huge file of photographic documentation of abuse and torture at Abu Ghraib, the Franken shot has the unlucky distinction of being one of the only pieces of photographic documentation in a largely un-photographed history of sexual misconduct. Have we seen a picture of Harvey greeting a visitor naked? Or his fabled bathrobe? Not yet. Has anyone produced a photo of Matt Lauer forcing himself on a colleague? Kevin Spacey? Charlie Rose? No. The absence of such photographs means that there’s a lot of symbolic weight placed on this one Franken photograph, simply because it exists.

So, yes, the two photographs are worlds apart, as different as death and sleeping, crime and misconduct, many and one. Still, I am drawn back to the uncanny and unfortunate similarities, particularly those grinning faces. Both Harman and Franken seem not simply aware that a picture is being taken but delighted to be in it. Both photos appear to have been to be taken as a kind of trophy or joke, as part of some collegial fun. As Franken said: “As to the photo, it was clearly intended to be funny but wasn’t. I shouldn’t have done it.” The same is true with the Harman photo. She and Corporal Charles Graner took turns taking pictures of each other with the dead man, whom all the soldiers were calling “Bernie,” (after the 1989 movie “Weekend at Bernie’s,” a comedy about workers trying to cover up their boss’s death). As Harman herself put it: “It was just to say, ‘Hey, look, it’s a dead guy. We’re with a dead guy.’ It wasn’t anything.”

In the end what makes both of these photographs so awful — albeit on very different scales — is not that they have captured the worst, but that they clearly have not. Although both Sabrina and Al have come to be accidental poster children, neither one of them is the worst example of what they have come to stand for.

Senator Franken, who has championed women’s rights, is no Matt Lauer, Charlie Rose, Harvey Weinstein, Roy Moore, or Bill O’Reilly. He has been accused of unwanted kissing and touching, not rape or forced sex or propositioning a minor. As for Harman, she did not beat up or kill the man whose bruised body is shown in the picture. In fact, she had a reputation for being a gentle soul, despite her weird hijinks with the dead kitten. Harman’s team leader, Sergeant Hydrue Joyner, once said: “If there’s a fly on the floor and you go to step on it, she will stop you.”

What their joyous, eager expressions suggest is that such hateful practices as the ones we see pictured — laughing at the suffering and death of another and jokingly groping a body that cannot say “No” — were so routine and normal as not to be questioned by the photographer, the subject, or anyone else there.

Hey, it’s just some dumb fun, these pictures say: What in the world could be wrong with that? 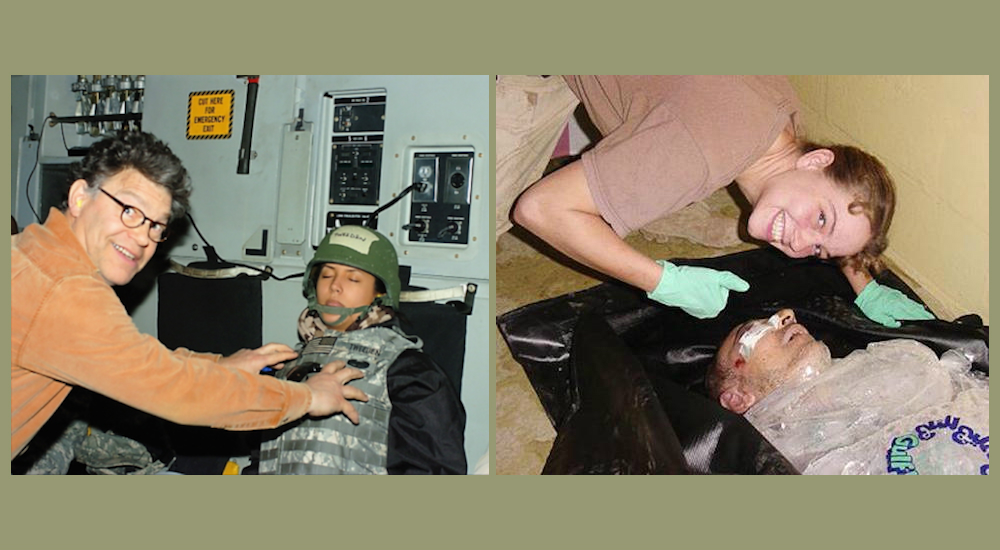