Few Americans would dispute the importance of the First Amendment’s protections to freedom of expression in all its forms. The right to freely practice any religion, a free press, the freedom to assemble and petition the government — these are all foundational American principles that, we are told, make the American form of democracy and liberty exceptional.

At this moment, when the growing and exhilarating number of people exercising their rights to assemble, seek redress from the government, and speak out in the press is being met with government-led, militarized, violent suppression, where is the First Amendment and who (or what) is it protecting? Protesters have been charged with felonies for attempting to identify a police officer using Twitter and are facing charges for merely gathering together to speak out against systemic racist violence. At the same time, a facial recognition company invokes the First Amendment in defense against claims that it is systemically violating the privacy rights of all.

It is clear that the First Amendment is in dire need of revitalization. Free speech must protect more than the right to utter words; it must also protect the right of activists to be free from the threat of violence for exercising that right. We need a form of affirmative action to give individuals a leg-up in utilizing the protections of the First Amendment.

The First Amendment has always been a site of conflict. It is, after all, the rubric under which Nazi demonstrations in Skokie, Illinois in 1977 were allowed to proceed in the face of impassioned opposition. Indeed, in the past few years we have seen the rise of similar gatherings touted as “free speech rallies.”

The Supreme Court, in its refusal to make value judgments about different types of speech, has shaped the First Amendment into a doctrine that protects powerful corporate and state-aligned actors at the expense of individual activists. Beginning in the 1970s with Buckley v. Valeo, the campaign finance decision that started us down the road to Citizens United, the Supreme Court has taken a hands-off approach to the First Amendment, famously stating that “the concept that government may restrict the speech of some elements of our society in order to enhance the relative voice of others is wholly foreign to the First Amendment.” Ever since, certain kinds of so-called value choices, or distributive actions, have been anathema in First Amendment jurisprudence, and a key doctrinal tool for defining the neutrality of the state and corporate actors under the First Amendment. As legal scholar and professor Jed Purdy has described, where the First Amendment is concerned, “the Court treats elections and political debate as if they were perfect markets because this premise secures them against the vices of political rent seeking.”

But within our capitalist democracy, the market is inherently imbalanced; any putative neutral or “market-based” framework necessarily favors the already-powerful. Thus, our market-based First Amendment doctrine has created the reality in which we now find ourselves, with corporations protected and activists not only unprotected, but uniquely vulnerable to civil and criminal recrimination as the price tag for so-called free exercise.

And that’s the catch. The problem is in the power imbalance — most individuals cannot afford to pay the financial (and bodily) costs incident to free exercise. Free speech is not free if you must first pay the price, and only later attempt to recoup your costs. The civil rights lawsuits commenced against police and municipalities by the Civil Liberties Defense Center (CLDC) and other civil rights organizations are vivid examples of the utter inadequacy of after-the-fact recourse to remedies. When police can shoot a reporter with chemical and impact munitions merely because he was exercising his First Amendment right to observe and report, when police chase peaceful protestors walking home on a sidewalk and torture them with rubber bullets and poisonous gas, clearly the “protections” of the First Amendment are degraded. And there is no way to quantify the cost of being denied your right to free exercise. Corporate “speakers” do not suffer the same consequences as individuals. They do not get gassed; they do not get beaten with clubs. And they have ample funding to litigate against activists who oppose them and to fight back against governmental action that protects individual rights but hurts their profits. This is a structural problem. The solution is hiding in plain sight.

While the notion of affirmative action for speech may sound bizarre, we do, in fact, already make value judgments that certain forms of speech are more important than others and thus more in need of protection. In recent years, there has been a growing and troubling trend of tort suits by corporations against activists. These suits are known as Strategic Lawsuits Against Public Participation, or “SLAPPs.” The furtive goal of a SLAPP is to stop individuals or groups from exercising their political right to free speech, to punish them for engaging in such speech, or to deter others from doing the same in the future by forcing defendants into baseless but expensive litigation.

SLAPPs pose a serious threat to free speech. Without protection from SLAPPs, ordinary citizens and public interest advocates would stay silent rather than run the risk of being punished for speaking out against the powerful. Several states have passed anti-SLAPP statutes to mitigate the effects of such bullying litigation aimed at thwarting lawful First Amendment activities. These statutes create a path for early dismissal of these lawsuits for defendants who can demonstrate that the suit arises out of speech and/or conduct that was undertaken in the public interest. One crucial mechanism behind various anti-SLAPP laws is not just the actual legal protection it gives activists (the fast-track mechanism for dismissing these frivolous lawsuits) but the enhanced damages the laws provide. If a lawsuit is dismissed because a court agrees that it is a SLAPP, the activist is then allowed to sue the SLAPP-er for attorney’s fees and other costs. This creates a further protection for activists as it deters these frivolous lawsuits from being filed.

Anti-SLAPP laws, therefore, protect free speech in two ways: by providing a proactive preventative remedy for speech violations (the fast-track motion to dismiss, based on speech “in the public interest”), and by providing a deterrent aimed at those contemplating filing such lawsuits (by providing for attorney’s fees and costs).

Even anti-SLAPP laws, for all their successes, suffer from the same potential “value-blind” trap. Most anti-SLAPP laws are, on their face, value-blind — that is, they do not explicitly state that they are intended to protect activists from malicious lawsuits brought specifically to silence their speech. A corporation can file an anti-SLAPP motion against a nonprofit or a government actor who has brought a public interest lawsuit (and indeed Exxon has recently announced that it intends to file an anti-SLAPP motion against the Massachusetts Attorney General in response to the climate fraud lawsuit recently filed against it.) Similarly, the Uniform Law Commission’s recent adoption of a model anti-SLAPP law does not even mention SLAPPs, which demonstrates how the anti-SLAPP concept framework has been transformed into a general “value-blind” free speech protection law that is now at risk of being co-opted by powerful corporate actors. Indeed, James Bopp, Jr., the architect of the Citizens United case, was one of the committee members behind the drafting of the model law.

The growth of effective anti-SLAPP laws shows that it is possible to say out loud, and loudly, that the speech of individual citizens, acting in the public interest, should be valued more than the speech of corporations acting in their own self-interest. The law and the courts can, and should, back this up. The pitfalls of neutrality are similarly clear. The failure of the legal system to protect individuals, as revealed in the contradictions of First Amendment jurisprudence, is not just a “natural” result of a value-blind approach to the law. Indeed, the insistence on this value-blind approach is precisely what has enabled powerful corporate actors to succeed in erecting myriad legislative and procedural barriers that further contribute to a landscape in which corporations are protected and individuals are at risk.

The way in which judicial insistence on First Amendment neutrality paves the way for the protection of the already-powerful is additionally revealed in another barrier to protecting activists: qualified immunity. Unfortunately, activists need protection not just from corporate actors but also police and other state actors; any sort of affirmative action for the protection of activist speech must take this into consideration. Proactively protecting activists from police action is, as we all have seen, overwhelmingly difficult, and not just because First Amendment protection for individual speech has been weakened. The deterrent effect of the damages provisions of anti-SLAPP laws is one potential way to attempt to limit police infringement of the right to protest; if police officers knew they would be personally liable for their constitutional violations, we might begin to see a limit to their violence.

Here, yet another legal doctrine created by judges waving the flag of faux-neutrality and marketplace values has long been a barrier to protecting protesters. The judge-created doctrine of qualified immunity effectively protects police officers from financial liability for violations of civil rights. The doctrine of qualified immunity is at best perplexing and at worst absurd (for example, it is not clearly established that a police officer who steals $200,000 while searching someone’s home can be held accountable for violating the homeowner’s rights) and much ink has been spilled decrying it.

Nevertheless, anti-SLAPP laws provide an appealing framework that could be deployed to reinvigorate the First Amendment. Activists and their right to freedom of speech need extra protection not only from corporate SLAPPS, but also — and perhaps more urgently — from the police and other state actors. Such protection cannot be provided under a value-neutral umbrella that purports to protect Exxon and environmental activists equally. Thus, any affirmative action to protect activists must clearly and deliberately incorporate value-affirming language. For example, we can explicitly define the “public interest.”

If we begin to shift our understanding of what “speech in the public interest” means, we begin to see that criminalizing protest is simply another way to litigate against public participation and activism aimed at disrupting the status quo. Such criminalization takes many insidious forms — for example, sentencing “enhancements” providing for increased punishment for protesters, sending a $2500 “bill” to the organizer of a protest, and rescinding protections for journalists and legal observers. These can all be seen as SLAPPs, the strategic use of the law to limit activists who publicly criticize the powerful status quo. Such tactics can and should be defeated using the type of “affirmative action” embodied in anti-SLAPP laws. The time is long overdue to restore the First Amendment to its hallowed status as the first and best right of the people. 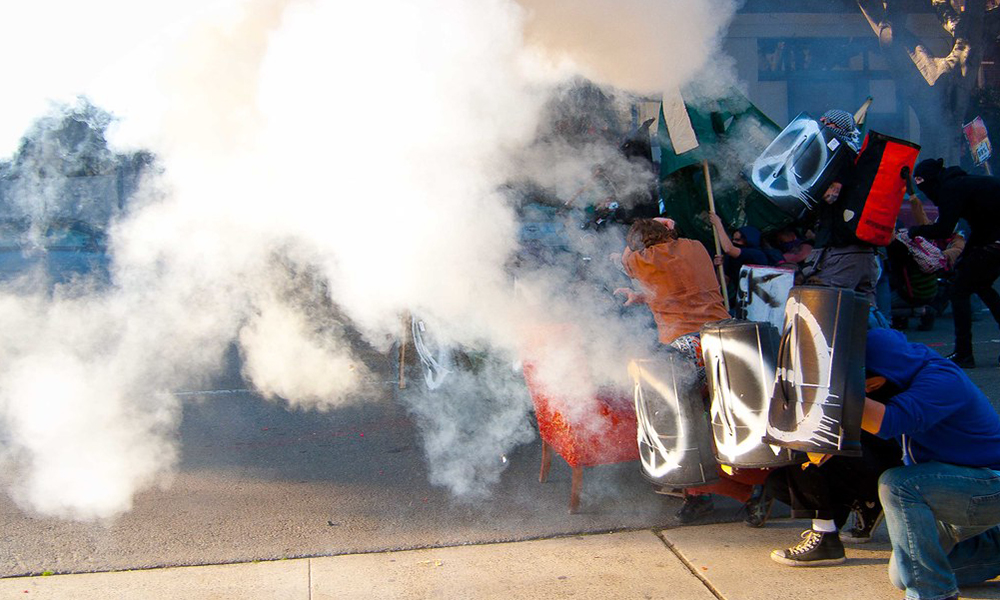