I WENT TO a puppet show last night. It was the story of the little mechanic who runs the human brain (pictured here as a moldy-looking engine room), zipping around adjusting dopamine and pressure levels trying to regulate his human’s behavior. There was one scene when the beleaguered homunculus was trying to get his insomniac to go back to sleep. How? He made him turn on the computer. “Season one, episode six,” he whispered, and the person’s rhythms relaxed back into REM.

I leaned forward to try to catch which show he was watching, but the title never came. It didn’t have to, I eventually realized, because the scene wasn’t developing a character by revealing his tastes in TV so much as it was appealing to a universal self-soothing mechanism; the experience of flipping around in the dark on a computer for something to watch has become that familiar. Netflix isn’t just The Way We Watch Now, the way Annie said, it’s The Way We Go Back To Sleep Now too. These days we can choose the perfect mood to chase away the nightmare, or the anxiety, or — less successfully — the sad. TV has gotten a lot more intimate, more entwined with our subconscious, closer. In this sense, shows have come to function as music, more symphonic poem than story, more repeating theme than plot.

(I, for instance, have recently medicated my anxious nights with Arrested Development, Peep Show, or Frasier. I turn to the first for its shadowless orange irresponsible cheer*, the second for the comforting bleakness of repeatedly hitting bottom again. As for Frasier, let’s just say its crises are underwritten by psychic safety.)

This isn’t that new, but as we think about how the Netflix and Hulu archives have changed our TV-watching habits, I think this tendency to watch television for reasons that have nothing to do with spoilers (or plot) has gotten stronger. TV has always been something we could have on in the background; it was a casual medium whose built-in inanity let us relax — this is the dubious charm of the late-night show. Over time, scripted stories got better and made more and bigger claims on our attention. Now, thanks to Netflix and other kinds of archival watching, there’s a funny middle ground. We might have Netflix on in the background not because we’re inattentive (or because it’s only mildly compelling) but because we watch TV now the way people watch movies: we rewatch. The shows that become classics are technically reruns, as AHP said, but even more so because they don’t flow from that place of happenstance that gives traditional TV its aleatory quality (“oh, it’s this one!”). Now we choose particular shows and we might — like the mechanic in the puppet show — even say “Season 1, Episode 6.” We rewatch, memorize entire sections, quote. The pleasure lives partly in the repetition and partly in watching things we know are coming be skillfully worked out — in watching the universe the show creates survive the minute scrutiny a fan loves to give it. In the really good shows those worlds are robust, and we can still find something new on a twelfth (or 48th) viewing.

Point being, as we talk about how Netflix technology affects the TV canon, one of the most interesting new contributing factors to a show’s long-term reputation is its resistance to repeat-watching. Spoilers, long the bane of the TV viewing public, are totally irrelevant in Netflix-world, and plotty shows that thrive on cliffhangers may not age as well. The real classics (in this sense, anyway) are the shows that reward rewatchers. Arrested Development is famously one of those shows. Across the pond, Peep Show and The Office are too. As Netflix has started to experiment with producing its own shows, it’s been interesting to see how different the results have been. I wish they’d release the numbers on how many people rewatch their shows. My guess: whatever the actual viewing numbers, Orange is the New Black has many more repeat-viewings than House of Cards.

I think it has to do with a show’s ability to keep its contract with its audience. House of Cards worked (for me) because it was gorgeously shot and seemed conscious of Spacey’s absurdity, his smallness relative to those epic sweeping shots of DC in the opening credits. He was a low-level Macbeth convinced he was Macbeth, and as he delivered his charming but pompous monologues, the bigger stories (to which he was oblivious) were swirling all around him. We weren’t supposed to take his sense of his own centrality at face value; his tragedy was that he thought he was a tragic hero. But a season’s aim is clarified by its ending, and the end of the first season was way too Francis-centric to sustain that reading. Francis is the center after all, and that makes the whole series, in retrospect, much less interesting. The universe is thinner than it seemed, and the show’s return to form (and Francis) betrayed our growing investment in a truly amazing ensemble cast and their stories, which revert to second-string. (This is my frustration with Mad Men too.)

Orange is the New Black does exactly the opposite: it begins, a little unpromisingly, as Piper’s fish-out-of-water story. To Piper’s credit, she keeps trying to call herself out on her own myopia, selfishness, and arrogance, and the show does too, by shuffling her to the side and expanding outward, investing more and more in the ensemble and less and less in Piper. More characters end up drawn as fish out of water than fish in it. It’s a magnificent, promiscuously sympathetic exercise. Yes, it falters sometimes: Pennsatucky is too monstrous by half (both shiftless meth-and-abortion-addict and murderous-fundamentalist-Christian), and Vicky Jeudy’s Janae Watson deserves a better story than the after-school special she got, but to these I say Sophia! Taystee! Red! Poussey — my favorite character in the show who steals every single scene she’s in even though we haven’t gotten her back story yet. The show is stunningly good at acknowledging the complexity and subjectivity of almost everyone involved. (Even the overdrawn Pornstache gets some dollops of sympathy.)

OITNB’s fishbowl ends up being a place from which you can see the world more clearly: the Maury Kind subplot was a brilliant sendup of the smaller fishbowl in which “This American Life” (the concept as well as the show) tends to take place. The show is a fugue of nested motivations, impulses, and stories that works hard not to sacrifice anyone, and — when that sacrifice is necessary — ruthlessly shows its effects. I will never get over Suzanne (“Crazy Eyes”) crying, and we will never get to feel better about that.

Do I need a Spoiler Alert to talk about the finale? Here’s one just in case.

It might be argued (and some have) that the show, like Piper, tries to call itself out on its own myopia and ultimately fails, but I’ll defend that finale as exactly the opposite. I think it’s a pretty incredible piece of television.

It’s always arresting when the ”good” woman goes dark, but to do so in a Christmas special is an unprecedented escalation in the Interesting TV Wars. I have never seen a Christmas special so lovingly executed, so gorgeously peppered with small moments of grace, in order to show both the effects of grace and what everyone outside it feels: isolated, misanthropic, partly dead. The Christmas pageant wasn’t mocked, its triumphs were fully earned, and yet Piper’s exclusion from them was just as fully warranted. The modulation in contrasts there was insane, it was filigree, it was totally amazing. If we worried that this show would devolve into Piper’s self-help story, that worry’s over. And if she isn’t a murderer, it’s on a technicality. That last shot of Piper smashing Pennsatucky’s face over and over, long after there was any sign of life, was an incredible piece of character assassination. I suppose one could argue that it’s still a Piper-centric ending in that it ends with her, but the heart of the finale is inside the auditorium, where Norma is singing. It’s Piper vs. the ensemble, and Piper loses. That’s a long way of saying that OITNB respects its own experiments and, in so doing, makes its world more real.

It’s been said that OITNB is a hard show to watch. Or rewatch. And yet, almost everyone I’ve talked to who has seen it has already watched it two or three times — unlike, for example, Season 4 of Arrested Development**. To quote one of the most rewatched shows on television: what’s the deal with rewatching?

There obviously isn’t a perfect correlation between the shows we rewatch for comfort and the shows we rewatch for quality; there’s too much bad TV, and too many bad reruns, for any right-thinking person to defend that thesis. But canon formation is a slow and sloppy thing. I do think that — for those of us built like the puppet in the play — when we reach for our computers in the middle of the night, it’s for a meditative kind of reassurance. It’s hard to square reassurance with footage of Chapman beating Pennsatucky, but maybe narrative safety isn’t the same as anodyne content. It’s more a matter of good building codes.

When we decide we want to walk down a well-worn televisual path again in the middle of the night, it’s for the mood or world that show creates. The impulse is almost more musical than narrative, but that world can only exist (that is, we can only trust it) if the show’s endings respect their arcs and its risky journeys are done well. When we’re riddled with anxieties in the middle of the night, maybe what we want is less a happy story than a good architect. Then, safe in the knowledge that there’s a god — or at least a decent mechanic — we can listen to the turning gears and go quietly to sleep.

*Talking about the first three seasons only. Season 4 feels — psychically speaking — like a nightmare version of AD to me.

** It was fine, I don’t want to get into it, but it needed to trump all its prior victories and tie its million threads together into an amazing whole. It didn’t. That ending was a mess. 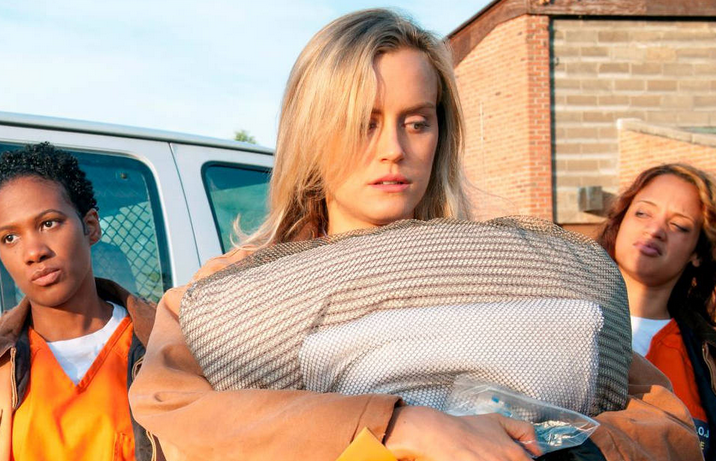