I’VE BEEN WAITING for this for a while. Of course, I love watching new episodes of Girls and cracking the spine on a fresh Word document to talk about last night’s bottle episode or money shot or video art installation. But, especially recently, what I really want to talk about is old TV. Annie, your argument about Netflix as the new canon is so right. And Netflix doesn’t just re-shift the Golden Age canon retroactively — in terms of de-throning HBO — it also influences what I watch on live TV. (The costliness and difficulty of catching up on FX’s Justified, for instance, means that I simply don’t watch Justified.) But Lili, it’s your point about re-watching that has my brain-strings all atwitter. I am no stranger to waking up at 6 AM realizing that Parks and Recreation has been auto-playing on my laptop for four hours as I lay dreaming. But as interested as I am in the dynamics of narrative comfort, in how Netflix puts us to sleep, as you put it, I’m even more interested in how Netflix keeps us awake.

Streaming may have artificially limited the canon, it may have provided an apparatus that fully realizes TV’s potential as background music, but it’s also made more astute, attentive viewers of a larger swath of the viewing audience. To dip back into the My-Students-These-Days data pool, I’ve found that while my students may not yet know what auteur theory is, while I may need to walk them through how editing works and what deep focus is, they have learned a kind of aesthetic intelligence about film and television that’s evolved out of their own viewing practices.  Despite their lack of technical vocabulary, many of them can immediately tell the difference between a Michelle MacLaren episode of Breaking Bad and a Rian Johnson one. They are aware of texture, in other words, the results of aesthetic decisions if not necessarily the mechanics of those decisions, and they are aware of it because their shows exist in infinitely watchable, infinitely re-watchable, infinitely controllable time. This, as much as the palliative or escapist quality, is one that is changing viewership. Viewers are becoming more attuned—because they are now in control of the archive—to the small ways through which shows are built.

This is, of course, not new either. Rerun culture has a long and storied history, cult films like The Big Lebowski and Rocky Horror Picture Show have generated intense fan bases, and the amazingly revelatory sociological/ethnographic work of Francesca Coppa on the history of “vidding” and video remix culture shows that, as long as VHS has been available, communities of fans have been watching their favorite series close enough to transform them into living, breathing, interactive things. But streaming now enables even casual viewers to behave like obsessed fans. It mainstreams, to some extent, the kind of compulsive, detail-oriented mode of spectatorship we have historically associated with the cult or, heaven forbid, the nerd. Streaming removes the material obstacles to this kind of fandom — the tape decks, the splicing, the dubbing — and lets us watch with the eye of a vidder. It makes Trekkies of us all.

For me, this is less remarkable for the way it allows us to engage with streamable series like Lost or Breaking Bad — series loaded with easter eggs and guns on mantles that were built anticipating and soliciting this kind of fannish attention to detail — than the way it allows us to engage with series that are not built like magic boxes. Combing through the Netflix archive, it quickly becomes apparent that there are shows that thrive in the streaming world, and those that don’t. Lili writes, “The pleasure lives partly in the repetition and partly in watching things we know are coming be skillfully worked out — in watching the universe the show creates survive the minute scrutiny a fan loves to give it.”  And as is often the case, series that may have had somewhat tortured lives on television have emerged as standard-bearers of this new mode of watching.

Friday Night Lights is perhaps the best example of this. Like QB1 Matt Saracen, FNL held on long enough to achieve some initial attention, get cut, get re-instated, switch positions (networks), and then go out with a glorious, if bittersweet, ending. FNL was never what NBC wanted it to be. It was too sad, too quiet, not footbally enough, not sexy enough, too good for this world. But it always had a small legion of fans, and now that the series is on Netflix, its audience builds by conversion like the early church. It feels like it’s always belonged online. FNL — like Freaks and Geeks or Parenthood — is an observational realist show about the practice of living, and that’s an aspect of the show that’s only easily accessible if it gets the kind of intimate, prolonged, attention streaming allows. We re-watch Friday Night Lights because of the texture it offers, the depth of field, the intense desire to see these deeply drawn, inarticulate people find a way to express themselves.

So the patience and ritual and intimacy of Netflix gives FNL a chance to succeed. But this close attention also rewards and transfigures a genre that’s been largely overlooked in all the recent press about the Golden Age: the single-camera sitcom. Freed from the stagey artifice of the multi-cam yukfest, the single-cams took off in the early century, popularizing a mockumentary, comic realist aesthetic, but, with a few exceptions, failing to achieve the kind of vulgar ratings success of their multi-cam, laugh-track cousins. The characteristics that define these shows — heavy serialization, familiar direct address to the viewer, lived-in spaces, mundane detail, painstakingly composed mise-en-scene, almost aggressive sincerity — made them popular but always somewhat awkwardly fitted to network TV. They demanded an intimacy from the audience that the audience was not always willing to give. But on Netflix, these shows — Office, Parks and Recreation, 30 Rock, Arrested Development, even Louie and It’s Always Sunny in Philadelphia to different extents — gain an almost sublime depth. Like FNL, these shows feel almost impossible now outside of the context of their streaming.

My personal addiction is The Office. I’ve watched the series beginning to end, in and out of chronological order, more times than I can count. It’s a series that survived on TV by anchoring itself to Steve Carrell’s star performance and John Krasinski and Jenna Fischer’s years-long will-they-won’t-they. These were the flashy heart and the broad arc of the series, but it’s only really in streaming that the textures of these performances become available.   Like any relationship, the viewer’s bond with the show is not necessarily based in broad arcs or large questions. Often, we find ourselves most tied to small, off-hand details, elements of mise-en-scene or observed quirks over and above grand gestures and A-plot points. The small flirtations and missed conversations between Jim and Pam through the second and third seasons far outweigh the emotional weight of even great event episodes like “Niagara” or “The Delivery.” And grace notes strewn throughout provide alternate ways to explore and imagine the series. (Try watching the first three seasons as a narrative about Pam and Dwight — trust me.) The thrill, for a show as invested in naturalism and the aesthetic of documentary realism, is not in riding along with a will-they-or-won’t-they arc, but in the feeling of knowing a character.

And knowing a character this way is a function of knowing that character over time. In her 2008 interview with Terry Gross, Jenna Fischer, who played Pam Halpert nee Beesley for nine seasons on The Office, revealed to whom the characters on the show are talking when they talk to the camera.  According to Fischer, when an actor enters into one of The Office’s “talking head” scenes — a convention adopted from the original British series and known in Reality TV documentary aesthetics as “The Confessional” — that actor is not simply reading lines. Instead, every talking head is a conversation, sometimes scripted, sometimes improvised, between the actor and the director of the particular episode. When an actor cries in a talking head, as Fischer has done on multiple occasions throughout the show’s run, it is often a reaction to similar emotion from one of the show’s corps of directors. When an actor seems caught off guard, it is because they often are. When the actor gives the impression of speaking to an old, trusted friend, it is because they, more often than not, are.

It’s not just that streaming and re-watching allows us to achieve a greater intimacy with series that we watch. It’s that streaming and re-watching help us realize that there’s an intimacy built into many of these contemporary series that only partially survives from week to week. The Office ended its run this year by focusing — in a meta-narrative twist — on the profound effect that seeing the full run of “The Office” (the PBS documentary that is the diegetic reason for the show itself) has on Jim and Pam and the whole cast. It’s a fitting end to the series, inasmuch as it recognizes the difference between checking in on the exploits of Dunder Mifflin week-to-week and seeing those exploits as part of a longer, larger fabric of time. It recognizes and validates how the series now exists to us.

It’s hokey to say that talking head scenes make You a Part of The Action, as if the whole series were Star Tours. But we are hailed, in a way, by this show and others like it. We can watch it as a more melancholy version of Friends or as collection of non sequiturs. But we are also asked by this show to revel in its detail, to catch moments we might not have seen before, to notice, for instance, that Dwight has a large, framed picture of a Predator drone above his desk in the later seasons. If, as Lili says, Netflix enables us to take comfort in architecture, it also allows us to enter these interior spaces and feel what it’s like to live inside them. It may seem like too much to make this kind of claim on behalf of this sitcom or any other, but, watching it over and over, it’s unavoidably true that this is how this series addresses us. There’s a goofy banality to re-watching that belies exactly how profound an experience it can be. But that’s what we like about TV, right?

I feel God in this Chili’s tonight, 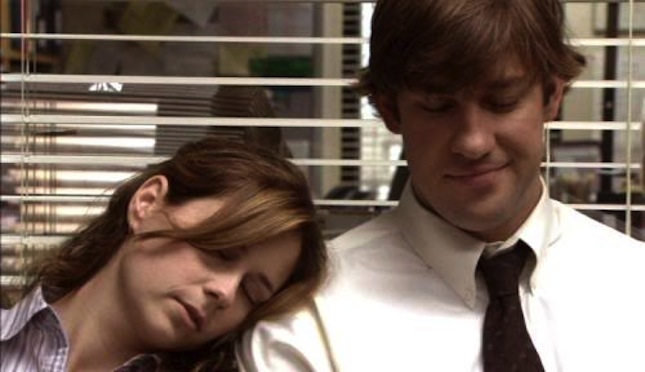