I’VE QUIT ONE JOB, I’ve quit two sports, I quit one (very ill-advised) diet. I finish all my books and once I start an article, I can’t stop reading it. But I quit television shows all the time — and more to this week’s point, I quit Homeland before Season Three even started. I quit The Bridge after four episodes; I quit Justified two weeks in to Season Four. I’m especially skilled at quitting teen dramas after two seasons, which is exactly what I did to The O.C., Gossip Girl, Vampire Diaries, Pretty Little Liars and even Veronica Mars. I quit Breaking Bad, and I will fight you if you try to shame me.

I don’t have any solid quitting policy: there’s no “three shitty episodes” limit or a checklist of unforgivable televisual offenses. It’s usually a matter of atrophy. A show is a priority until, gradually, it isn’t, and the unwatched episodes pile up in my DVR queue like moldering Moneysavers on the front porch.

The atrophy of fandom is nothing new. What I want to suggest with this post, however, is that in the contemporary attention economy, it’s a necessity — an ability to be cultivated and celebrated, not denigrated or shamed. Quitting television shows, especially shows that have betrayed us, is tremendously liberating, almost akin to removing oneself from a toxic relationship. I broke up with Homeland, in other words, and I feel great.

We all know there’s too much good television. There’s too many good movies, too much good journalism online. But it’s only “too much” because we feel like we don’t have enough time to consume all of it — there’s a bountiful cornucopia of media out there, media that soothes and challenges and compels.

But in order to get to the good stuff, you have to be willing to embrace two contradictory impulses: You must be ruthless, but you must also be patient. You must be willing to allow a show’s voice to develop — to weather a first dysfunctional season, for example, or to reach a point of seriality that “boring” suddenly morphs into “gripping” — but you must also be ready to listen to the voice inside your head that says this makes me feel shitty.

At the beginning of the year, I’m always open to new stuff. A supernatural procedural that blends 18th century historical figures with contemporary crime solving? Okay, fine, sure. I receive some guidance from the people whose job it is to watch every new fall show (A thousand voices telling me to avoid Dads). But with everything else, I follow the mom-enforced dinner rule: take one bite. But I also follow the second part of that rule: namely, if you don’t like it, you don’t have to eat it anymore.

If you’re going to practice this quasi knee-jerk strategy, however, you have to refuse to be stubborn. I hated tomatoes as a kid, and my stubbornness made it so that I didn’t even realize that the watery, mealy things on the top of burgers could be transformed into tangy, complex things when fresh and salted. You thus have to be willing submit (and often re-submit) yourself to a show and its charms. I didn’t like American Horror Story’s pilot; now it’s one of my favorite feminist shitshows on television. I refused to watch a show with Zooey Deschanel; now I’m in love with New Girl’s Nick Miller. I thought any show on ABC Family was regressive bullshit, but then Emily Nussbaum made the case for Switched at Birth and I saw the light. I’m always ready to be convinced of my wrongness, especially if that convincing only takes 42 minutes of my evening. A willingness to be wrong — to admit it, and celebrate seeing the light — might even be a hallmark of a good critic.

But then you also have to be willing to make unpopular choices. Quitting Homeland isn’t all that unpopular: every Sunday night, my social media feeds are filled with those dropping from it like once-manic flies, hoping to escape before the show reaches some lobotomizing stage. But quitting Breaking Bad was much more shameful. The first time I quit, it was because of “Grilled” — an episode that made me feel so anxiously nauseated that I couldn’t describe my relationship to the show as anything other than masochistic. Breaking Bad was filled with what I’ve termed “sticking points in serial television” — episodes that are so profoundly affecting that you can’t bring yourself to go beyond them.

The famous Friday Night Lights episode “The Son” was one of my most significant sticking points. Because of similarities to my own life and experience, that episode generated more than weepy sadness. I cried so hard the computer screen in front of me shook. It was a sticking point, but it wasn’t forever: quitting FNL after that episode, and not seeing what happens to my beloved Matt Saracen, would only make me feel more grief, not less.

But what would I gain from watching more Breaking Bad? People love to talk about the relatability of anti-heros, and I get it some of the time (Tony Soprano, Raylan Givens, Juliette Barnes), but Breaking Bad became one alienating adrenaline rush after another. The seriality pulled me along, but I finished each episode feeling a little more empty than before. Breaking Bad was, somewhat ironically, not all that different from drug addiction: it made me feel shitty, but I couldn’t resist its narrative gravity.

Don’t mistake me: Breaking Bad was doing a lot of complicated, fascinating, and daring stuff, and it’s certainly an excellent show that deserves (nearly all) of the accolades piled on it. I powered through my sticking point — all the way through Season Three — because it’s my job, both as an academic and a writer, to be conversant in these things. But professional obligation only needs to go so far: film critics should probably watch Saw, but do they need to watch all six? To be conversant in European Art Cinema, must I watch every Ingmar Bergman? Or can I just watch a few, figure out they’re not my thing, but appreciate them for what they are?

I needed to watch Breaking Bad, and I needed to be patient with it. But I didn’t need to finish it and feel horrible while doing it.

When you love a show, however, it’s difficult to feel generous towards others who don’t. In the summer of 2010, television scholar Jason Mittell wrote a lengthy piece “On Disliking Mad Men,” effectively lighting an academic/quality television fire storm. Mittell works on “complex television” and has published broadly on The Wire and Lost; Mad Men should be a natural fit, taste-wise. But he watched a season, though about it broadly, and decided to stop. Many readers (myself included) begged him to go farther — in essence, we wanted him to understand our own devotion to the show. But our arguments (mostly about characterization, nuance, its treatment of history) didn’t address his fundamental, deep-rooted dislike  It was an unpopular decision, but he stuck by it. He quit, and he felt great.

When a teen melodrama has exhausted all possible couplings and resorts to car crashes, the underworld, or unmotivated changes in sexuality, it’s time to quit. Unless, of course, you start to think of it as a wholly different type of pleasure. I think this is what Phil is describing about his relationship with Homeland: it’s bad in the service of (hopeful) good, and he’s willing to suffer for the pay-off. Nashville has always been somewhat bad, but I’m endlessly willing to suffer that badness for the wonderment that is Hayden Panettiere’s storyline. When I watch The Notebook, I fast-forward through the nauseating old people parts; when I watch Nashville, I fast-forward every time I see Peggy or Lamar’s face. I make my own edit, and that edit makes me feel no pain.

Feeling chronically bad or bored or offended is always enough reason to quit a show. But there’s also something to be said for quitting before the show goes off the rails, thereby preserving its immaculate memory in your mind. This strategy involves a mix of clairvoyance and the ability to read entertainment trade journalism. Because sometimes you just know. Your favorite couple has broken up, or gotten together, or someone died, or someone didn’t die. The narrative has run its course, but the powers that be drag it on, hungry for the 100 episode-mark that will allow the series to be sold into syndication and create a huge financial windfall. For these shows, quitting while ahead just isn’t an option: so long as the show’s drawing the numbers the network wants, it’ll keep it alive until the showrunner’s contract runs out. It’s death by slow, overwrought, narratively exhausted torture, and it’s a fate shared by everything from Grey’s Anatomy to The Office.

Alternately, the industry itself gives you all the hints you need to know better. The show switched to a new network (Veronica Mars), it has a new showrunner (Community), it’s being revived nearly a decade later (Arrested Development), or one of the stars is outta there (Downton Abbey). Phil mentioned that his ability to stick with a show is predicated on trust — especially of a showrunner — and the above moves should signal that your trust in a show is no longer warranted. In these cases, a refusal to heed the signs of a show’s demise yields little more than a general distrust of the product you once loved. You didn’t quit, and now you’re bitter.

A combination of clairvoyance, industry news, and access kept me from watching the downhill seasons of so many of my cherished shows, which allows me to live in ignorant, willful bliss.  Veronica Mars and Logan Echolls are frozen in amber on their graduation day, and Carrie Mattheson is the strong, centered woman who said goodbye to Brody at the Canadian border. Unlike Phil, my investment in television is less with the process than the overarching product: he loves watching Homeland try its damndest to “add up”; I find it — especially when watching “real time,” with a week between each episode — infuriating. I don’t like the person I become when I hate a television show and continue to watch it. Instead of disliking myself, then, I just stick to disliking (and abandoning) the show.

Television viewing used to be characterized by its passive inertia: the ability of the network flow to glide you seamlessly from one show to the next. Why make a decision about what to watch when your favorite network has made it for you? A modicum of flow still remains (see, for example, the Netflix timed countdown from the end of one episode to the beginning of another) but most of us dictate our own media consumption diets. But we need to be economical: there’s too much out there to love, so why spend time watching what you don’t?

Don’t misinterpret this as a pass to avoid shows that are complicated or different or slow. We should all expose ourselves to things that challenge us and our tastes, and do so regularly. But we shouldn’t feel like our tastes should hew to everyone else’s: chances are we’re all lying about being caught up, or even liking, a show that we’re supposed to. I love watching television shows, after all, but I also love the liberation of quitting them. You might too. 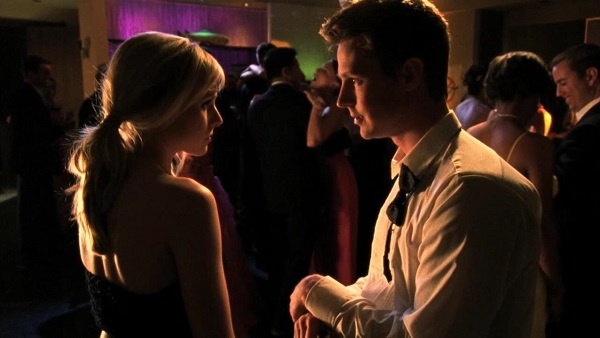