THE THING ABOUT American Horror Story is not just its insanity or its abjection or its politics or its provocations — it’s how much of it there is!  As such, the list becomes a common feature of essays about the show, including our own. We don’t write about the monsters; we write about the diversity of monsters. We don’t write about a scenery chewing performance; we write about a veritable feeding frenzy of actresses. We don’t react to occasional preposterous twists; we have trouble keeping track of them. I’ve written about how the anthology format allows AHS to get away with this over-stuffed approach by providing an artificially constrained space in which Ryan Murphy can, sometimes literally, shoot his entire wad. Can this subplot about gay ghost baby adoption sustain itself? Is this dance sequence a little too much? Will audiences seriously watch Dylan McDermott try to act for this long? Who cares, we’re all gonna die!

Annie, you wrote beautifully about how the show sustains the possibility of being both misogynist and feminist, glorious and grotesque, and I think a lot of the reason this is possible is structural. But, even if the one-and-done seasons of AHS enable a kind of creative abandon on the part of Ryan Murphy, it doesn’t solve the problem of how to feasibly get every abject thing in Murph’s mind onto a show in a way that makes any coherent narrative sense at all. Sure these guys want to wedge alien abductions, Boston marriages, The Thorn Birds, ghost hunting, sadistic sexual torture, and sexy priests all into a season of television, but how? I don’t think, to this extent, we can overestimate the importance of place on this show. The way Ryan Murphy gets around it is by opening up a Hellmouth.

I’m speaking, of course, about Buffy the Vampire Slayer. Professionally, Buffy is a Vampire Slayer. But, if that were your job, presumably you’d have to travel a lot — like an insurance salesman or a corporate downsizer or a stinking academic. But Buffy’s in high school. What’s unique and fun and resonant about the series as a horror series — that it’s both a supernatural adventure show and a humane, funny look at what it’s like to be an ordinary teenager—is forfeited if Buffy is a jet-setter. The action, in other words, has to commute to Sunnydale: the Hellmouth. Sunnydale, CA, it turns out, is an ancient zone that attracts supernatural phenomena like a magnet. A kind of portal or blurry in-between space, it just so happens that, by living in Sunnydale, Buffy has access, not just to vampires, but demons, lizard creatures, nefarious mid-90s computer programs, all manner of zany horror. What the hospital is for ER or the law firm is to The Good Wife, the Hellmouth is to Buffy. It curates and transports the drama, allowing a broad-ranging adventure series to settle down in a particular place.

This is obviously not a trope that’s specific to Buffy — from the Indian burial ground in Poltergeist, to Dana’s apartment building in Ghostbusters, and even the cabin in Whedon’s Cabin in the Woods — but it is a trope that Buffy owned and transformed on TV. As Jane will write tomorrow, Alfred Hitchcock Presents maintained a diversity of spooky experiences by anthologizing episodes and moving locales week to week. Mulder and Scully had some conveniently located cases, but they also had to travel all over the country to track down their X-Files.The cases on Fringe only seem to string together because of the common thread of Bishop’s research.

Ryan Murphy has, for three seasons now, utilized something like a Hellmouth device as a contrivance to let all the crazy he wants congregate in one location. The “Murder House” of the first season was a veritable American history lesson of horror, containing a legion of new and notorious villains. Not just a haunted house in the traditional sense, it turned out that the Murder House was a kind of garbage dump of evil, a machine for the manufacture of the Antichrist. The asylum functioned in a similar way in the second season, and now, despite perhaps a slightly more tightly plotted story, New Orleans is Murphy’s newest Hellmouth, complete with all the native murderous history and walking dead he could ever have stuffed into a California home. (It’s tempting to describe the gallery of pervy monsters on True Blood in this way, with Bon Temps as a kind of Hellmouth, but part of the brilliance of that show’s premise is precisely that Bon Temps is not exceptional. The whole world is a Hellmouth, it turns out, and everyone just has to deal with it locally.)

But there are other ways of describing what Murphy does. Indeed, to some extent, you could say that the series picks a bunch of threads and then figures out where they all converge or vice versa, thus producing a kind of organic Hellmouth. Type grunge suicide, antichrist, Tennessee Williams, Black Dahlia, and psychotic abortionist into the search parameters on your Zillow real estate app and, voila, Murder House, California! But the series on the air right now with the most totally sincere and straightforward debt to the Hellmouth School of Horror Series Design is Fox’s hot nonsense Sleepy Hollow.

I have to confess here that I love this show like I love the music of Ke$ha. I understand its mixture of insanity and self-awareness, I love that its eccentricities don’t seem entirely affected, I respect its willingness to do stupid things in the service of potential brilliance, I love the way it plays with the tropes of its medium, and I’m really into all the campy apocalyptic energy.  In fact, it doesn’t seem like a stretch to say that, after he’s mortally wounded in the Revolutionary War, ensorcelled, frozen for several centuries, and then reawakened in 2013 to fight the Headless Horseman, our hero Ichabod Crane, like Ke$ha after a night in the club, wakes up in the morning feeling like P. Diddy.

Sleepy Hollow’s got a classic buddy-cop center — stolen, note for note, from both Cumberbatch’s Sherlock and its American cousin Elementary — a dash of National Treasure/Da Vinci Code historical occultism, and it’s host, even in just these first few episodes, to a really inventive array of supernatural baddies from the hilariously Rambo’d Headless Horseman to an actually, genuinely scary eyeless Sandman. What makes the show so much a part of this Buffy lineage, though, is the nominal plot.  Without going too far into the faux-serious whirligig of this premise, Crane wakes up in Sleepy Hollow because the horseman whose head he removed in the Revolutionary War was actually, via a spunky mash-up between Christian eschatology and nineteenth-century American literature, one of the four horsemen of the apocalypse. So, of course, a sexy coven of witches — are there any unsexy covens anymore? — hid the severed head in Sleepy Hollow, thus forestalling the apocalypse. Crane wakes up because for some reason the Horseman has retraced his steps to figure out where he last saw his cranium, and he’s locked and loaded for a fight with a misappropriated literary character. Seriously, trust me, it’s great.

In any case, this sets up Sleepy Hollow, NY as a kind of apocalyptic Hellmouth. There are four horsemen constantly trying to manifest themselves, and, though they occasionally strap on machine guns and show up in person, they work largely by proxy. So Crane (played with irresistible dash by Tom Mison) and his partner (a much-better-than-she-needs-to-be Nicole Beharie) team up each week to neutralize threats that run the gamut from possessed psychiatrists, modern day Hessian soldiers, and sleep demons, to all sorts of other colonial-era junk. Everything that appears is the result, however flimsily sourced, of the fact that, somewhere in Sleepy Hollow, there lies the key to the apocalypse. Like all Hellmouths, there’s a logic to this place, but it’s by no means a logical place. All we need is a tentative reason for it to exist, and then we can sit back and let it randomly generate episodic devilry.

Because the Hellmouth concept allows a show to forego elaborate explanations about causality, it frees up these shows to work at different levels.  In other words, this strong mythological center let’s a series not have to worry too much about mythology. The grave mistake of Lost, in this regard, was setting up the explanation of its own Hellmouth as something that audiences might expect or look forward to. Some magic boxes should stay closed. American Horror Story takes advantage of this dynamic by building narratives about America’s political present. Race relations, the abortion debate, LGBTQ issues, and even, in an alternately too-tidy and too-leering way, rape culture. In the grand tradition of horror before it, AHS necessarily works as cultural commentary. What Murphy’s Hellmouths cough up are the ghosts of America’s stalemated culture wars, and, thanks to Annie, we all know what they look like.

Sleepy Hollow for its part seems content, for now, to revel in lightly toying with its generic forebears, but it certainly has the potential to engage in some wackadoodle critique of its own. It’s by no means as ambitious as American Horror Story in its cultural politics, but it both embodies and speaks back to the kind of revisionist-nostalgic obsession with American history that defines the current political moment. Indeed, a few episodes in, we see a flashback revealing that Ichabod Crane organized the Boston Tea Party as a diversion so that he could steal a supernatural MacGuffin that unleashes the forces of the underworld…or whatever. But the other thing we realize is that this is only the second most ridiculous, delusional, and fantastical appropriation of the Boston Tea Party American culture has produced recently. Sometimes the Hellmouth opens, and we fall right in.

There’s a place downtown where the freaks all come around,
It’s a hole in the wall, it’s a dirty free-for-all, 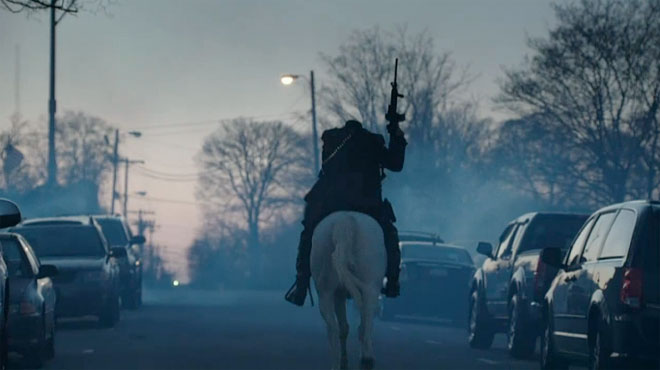