HEY, REMEMBER WHEN Fox Tuesdays were the next best hope for a full-on televisual Ladies Night? An evening of television created by female showrunners and structured around Zooey Deschanel and Mindy Kaling? Fox had harvested the fruit of a decade of Tina Fey pioneering and invited us all to sip upon the delicious, feminist Liz Lemon-ade! In fact, that was part of the reason why this very blog chose to write a weekly column about New Girl and The Mindy Project last fall (a column you may or may not recall that we dropped like a hotcake midseason in order to spend time with Lena Dunham in Patrick Wilson’s brownstone).

As it turned out, New Girl was maddeningly inconsistent, and The Mindy Project’s unembarrassed embrace of the lurid wealth that enables but goes unmentioned in most sitcoms began to feel unseemly. But, more than that, neither show was really paying off on that whole Ladies Night thing. In fact, the reason to watch each week was more often determined by Nick, Schmidt, or Morgan than it was by Jess or Mindy. Ladies Night had been infiltrated by wacky dudes, and Fox noticed. So, this year, Fox plugged Tuesdays with Dads — a comedy that reminds us how much more racist and misogynist things sound when human people say them instead of cartoons — and Brooklyn Nine-Nine, a promising new show about a man-child police detective. (And, for what it’s worth, it’s widely assumed that Dads will likely be replaced midseason by the recently resurrected John Mulaney Show, which is about a dude named John Mulaney.)

Jane, you’re very right to point out the man-childishness of this block, and Lili, your treatise on the new — questionable — sincerity of these shows is really right on. There is an evolution going on here, and I think an intermediary step that we ought to talk about is The Bro. Last year I wrote a post about Schmidt and Mindy that attempted, with all the requisite rigor of a PhD in English, a theory of the douche-bag. Schmidt was a d-bag, so was Danny Castellano, and so too, I suggested, was Mindy — trying too hard for the wrong things. There was pathos in the struggle, but the shows were essentially ballads of the unrepentant tool.

At the root of the d-bag discussion was likability. Why was Schmidt a relatable heel while Mindy pushed her audience away? It’s obviously a gendered distinction, but it wasn’t until this week that I think I realized the fine grain of it. For women on TV, the archetypal d-bag is the Mean Girl. Shallow, catty, Machiavellian — you’re either a glamorous jerk like Olivia Pope or a low-rent, dastardly one like the kind Allison Janney now plays (perfectly) on Mom. Once a female character becomes a d-bag, there’s nowhere to land but Regina George. Either the mean girl repents and becomes human again, or she remains a villain. (Hopefully, we’ll be able to write a little later this season about The Good Wife’s Alicia Florrick, the primary example of a female character who’s been able to exist betwixt and between these poles, and, not incidentally, the protagonist of the best show on television. Come at me!)

For men, of course, there’s the archetypal Sleaze — a role with which Schmidt has always flirted and that was portrayed last week on Mindy by the evil Glenn Howerton. But men also have a second option that I’m not sure yet exists archetypally for women on television. It’s softer, it’s kinder, it’s d-baggy and cocky but also still somehow redemptive. I’m speaking, of course, of the Bro. And, in the absence of an idea of what to do with Jess or Mindy, Fox Tuesday night has become the Frat House of the television landscape.

Jake Peralta (Andy Samberg’s character on Brooklyn Nine-Nine) is the very model of a modern good bro. He’s almost psychotically confident, obsessed with asserting his masculinity by winning a date with a female detective, but even more obsessed with winning the best friendship of his tough-as-nails gay captain, played by Andre Braugher. Peralta is presented as a typical loose cannon, but, rather than be distracted by liquor and women like many sleazier loose cannons past, Peralta’s wildness is manifest in zany, fratty, ultimately inclusive antics. He tazes cantaloupes, he competes in fire extinguisher-propelled office chair races, and he wears a brightly colored Speedo to work as a prank on the captain. He is, in other words, confident enough in his competence to treat his job like a joke and secure enough in his sexuality to play around at its boundaries.

Schmidt is the primary bro on New Girl, but, especially in the light of his recent duplicity, he is emphatically a bad bro. Nick Miller, while disqualified from true good bro-ness, at the very least embraces the aesthetic of the good bro. And, to this extent, he provides a counter-weight to Schmidt’s sleaze. He’s a slob and a drinker, a Chicago Bears fan and a hacky-sacker. Until last week, he’s been emotionally unavailable in a particularly gendered way, and, earlier in the series, he fell in deep, platonic love with Jess’s boyfriend Fancyman. Again, even though Nick is atypical, he embodies the key good bro qualities of faithfulness, dudeliness, and a healthily flexible sexual imagination.

The Mindy Project is the third part of this Bro-ly Trinity, and it features one of the clearest conversations about the State of the American Bro yet going. In fact, in a recent episode, this conversation becomes explicit. Danny (Chris Messina) is threatened by the appearance of a new doctor, the charming, ex-frat boy Peter Prentiss (Adam Pally). Danny complains to Jeremy that Prentiss, “calls everyone boss or chief or little buddy,” to which Jeremy replies that he had assumed the two would get along, being both of them “American dudes.” Jeremy has rightly picked up the fact that Prentiss is the living ideal of fraternal intimacy. Danny then articulates what he believes to be a fundamental difference between the two men: “We’re nothing like each other, ok? He wears cargo shorts, I wear slacks. He surfs, I fear the ocean out of respect.” Danny identifies with a kind of stoic, conservative, working-class masculinity whereas Prentiss is a classic frat guy: scrubbily privileged and entitled. But, as their actions eventually reveal, the differences between Danny and Prentiss are really just internecine squabbles between Good Bros. As macho OB/GYNs, they are representatives of fraternity and maternity in equal measure, and, when Mindy needs them, they’ll be there to help.

Prentiss is the Good Bro par excellence. He speaks in the language of the frat (“I’ve been on the other side of this a lot — dumping chicks.”; “I would chop you down on sight.”) but he also demonstrates an almost preternatural sensitivity with the practice’s patients. He talks constantly about the “chicks” he’s dating, but he also keeps trying to touch Danny’s “junk.” His swaggering masculinity is not an act, but it occupies equal real estate with his ethical and professional goodness. Nowhere is this more clearly materialized than when he helps empower Mindy to get over her breakup, wiping her tears away with a g-string. Earlier in the episode, he tells a pregnant patient, “I’m kidding, but I’m also being really serious.” It’s the fundamental contradiction of the Good Bro. His lightness co-exists with, even enables, his substance.

But all of this is less about a particular assertion of masculinity than it is about a likability gap. New Girl and Mindy Project were initially faulted for having protagonists who were, respectively, too twee and too mean. In order to counteract this, the Good Bro emerged on these shows because if the Good Bro is anything, he’s likable. His contradictions exist because he’s a character pitched to what networks perceive to be the priorities of both male and female viewers simultaneously. The Good Bro is a good-time party guy, masculine/feminine subject, a figure viewers can have in common. He’s also the lynch-pin of the kind of hang-out style show to which all three series aspire (needless to say, Joey Tribiani is as Good a Bro as it is possible to be). He’s invited you into his fraternity. It only seems strange because it used to be a sorority. 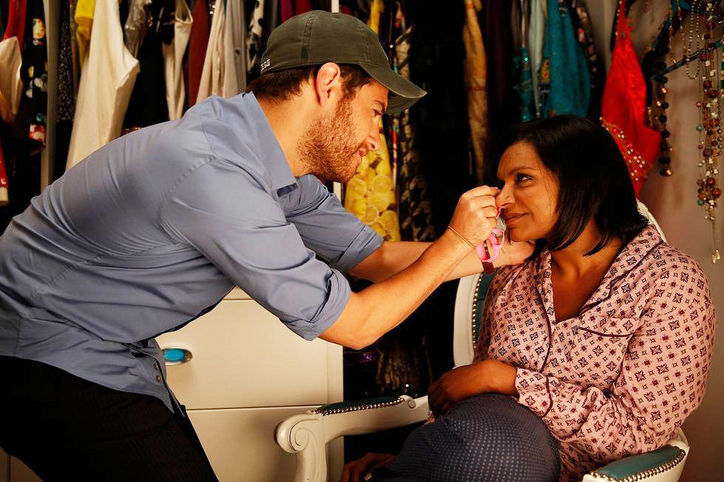