FIRST OF ALL, it’s great to be back at the LARB. I’m also excited to be back covering an early sixties period drama about sex, ambition, and women in the workplace with all of you. (And no, I’m not talking about ABC’s Pan Am.) I’m talking, of course, about Showtime’s new original series Masters of Sex about the sex researchers Masters and Johnson, starring Lizzy “She’s So Fantastic, She Should Really Get Her Own TV Show” Caplan and Michael “Wesley Snipes” Sheen, and debuting in the enviable/unenviable slot after Homeland Sunday nights. If only because, at a very basic level, Masters of Sex is not a series about the investigation of the grisly murder of a beautiful young woman in a small town, I’m in. But, more than that, it’s a funny, really very well-acted, oddly ambitious piece of historical fiction. And, despite the fact that I honestly cannot think of a sillier title for it — Sex Masters, Johnson and Johnsons, Nudity Party U.S.A. 1959 — I’m very bullish about its prospects.

That said, it’s got a weird pilot. And, for this opening post, I want to stitch our lineage as a blog together with Masters of Sex’s as a series, and talk a little bit about how the nagging muscle memory of Mad Men makes this pilot even weirder to watch. It’s an obvious, not entirely generous, comparison to yoke these shows together. Unlike the previously mentioned Pan Am, there’s very little evidence to suggest that Masters is in any way an effort to jack Mad Men’s style and cache — though I’m sure an early sixties setting is not exactly a liability in a pitch meeting at Showtime — and while Masters is portrayed as something of an aspirationally lecherous heel in this episode, he’s by no means a Golden Age anti-hero. Masters of Sex is not, in other words, a Mad Men rip-off, and the longer we talk about them in the same breath the more difficult it will be for an audience to build around the new series. But looking especially at this first episode in the context of Mad Men’s, I think we can figure out a little bit about what makes this pilot feel slightly off, and also what makes this pilot thrillingly unique.

One of the most notable quirks of the pilot is its heavy — sometimes almost unseemly — reliance on exposition. Masters is literally introduced to the audience by his provost at a gala in his honor, Johnson gives Masters a fairly detailed outline of her marital history and previous education in a job interview, Johnson explains her philosophy of liberated adult sexuality to her lover on numerous occasions, the lover responds by articulating — as if from a history textbook about social attitudes of the 1950s — his own philosophy about the relationship between love and sex, and we’re told quite plainly that Masters doesn’t care about having the child he and his wife are attempting to conceive, that he has a low sperm count, and, a few more times than is necessary, that Masters’s career is in jeopardy.

It’s perhaps understandable that this show is so forthcoming so fast. Created by Michelle Ashford, a veteran of HBO’s Pacific and John Adams miniseries, Masters of Sex is not a program all that interested in mystery. Like those miniseries, this show is a talky, action-packed exploration of historical events that we already know to have been hugely important — though the action here tends more toward laboratory sex than open warfare. But, unlike that other contemporary historical fiction The Newsroom, Masters of Sex is already signaling its preference for depicting the small-bore, messily executed machinations of history rather than the grandiose, benighted movements of Great Men and the Women Who Inspire Them. This could easily have been a series with more opaque leads, more of a slow roll-out, but the quick and clean establishment of back-stories, motivations, sexual philosophies, and potential entanglements sets us up for a different kind of show, a show less concerned with foreplay than sexy, messy process. Why obscure the Google-able biographies of your two leads, when you can get down to the business of showing how the giant electric dildo camera gets made.

Mad Men, for its part, is a series that feeds on the unsaid, the winkingly-acknowledged, the invisible. Especially in its treatment of female sexuality and the stirrings of workplace feminism — but even in its establishment of Don’s secret past — the show prefers showing to telling, inarticulate impulses to articulated ethics, dramatic irony to intentionality and agency. Peggy accidentally begins her climb on the corporate ladder, Joan exercises sexual freedom only under the guise and through the performance of courtship rituals, the secretaries of Sterling Cooper are presented as innocently, regrettably on the hunt for husbands amongst the rascally junior employees in Pete’s office. Sex, on Mad Men, is either in appearance or reality, in control of the men. Joan may initiate a cha cha, but she won’t take the lead.

The pilot of Masters of Sex renders immediately visible and articulate everything that Mad Men has spent six seasons silently layering. In the form of Virginia Johnson, the emergence of a modern female subjectivity is not set up as an arc on Masters of Sex so much as it is taken as a given. A canny, sex-positive, openly ambitious single mother and divorcee, Johnson begins the pilot episode in the secretarial pool and ends it as a vocal, quasi-acknowledged partner in Dr. William Masters’s sex research project. There are a few throwaways about why a lowly secretary is lecturing the provost of Washington University in St. Louis, and I’m sure that the series will have things to say about the gender imbalances in both the university workplace and in the field of science. But we meet Virginia Johnson at the end of her early struggle, and her problems at the end of the pilot are the kind of next-level problems faced by Peggy and Joan in the sixth season of Mad Men.

More importantly, though, it gives us a female lead — played by Lizzy Caplan with a kind of constitutional brassiness — who begins the series with a sense of franchise and power. Even if it feels clunky at first, there’s something exciting about a series that isn’t going to make us wait around for the moment when an oppressed woman finds the courage/outlet to speak. Sopranos, Deadwood, Breaking Bad, Mad Men — the woman who slowly, and at great cost, finds her voice is practically a genre convention of serial television’s “Golden Age.” And while Peggy, for example, is presented as a triumph, let’s not forget the misogynist vitriol that an arc like this can encourage against a character like Skyler White. And let’s not also forget that David Chase himself characterized Carmella Soprano’s resistance as the hypocrisy of a “housewife whore.” In other words, narratives of female self-empowerment don’t always play as narratives of progress in television’s Golden Age. And Masters of Sex provides a different way around this convention. Virginia Johnson joins Homeland’s Carrie Mathison as a female protagonist who, though beset by structural inequality, has a voice to begin with.

This makes Masters of Sex a very different kind of social fiction and a very different kind of historical fiction as well. The episode ends with two particularly brutal moments. First, after her first big success as Masters’s partner, Johnson’s lover has a Pete Campbell-style tornadic meltdown about being used sexually. He claims he’s in love with her, she counters that they just have a friendly, consensual sexual relationship. As if in an outtake from the John Cassavetes remake of Friends With Benefits, her lover smacks her in the face, and she punches him back. The episode then closes a few scenes later with an equal emotional brutality when Masters suggests to Johnson that they should have sex as part of the research program. As explicit as Masters of Sex is about Johnson’s fully-formed sexual politics, it is as explicit, if not more so, about the cost of that position. The ending feels pat to me, and Masters’s proposition really feels more like a fifth or sixth episode revelation, but it’s an intriguing aesthetic choice to begin, often literally, with everything on the table. It’s been mentioned, rightly, that Caplan’s performance, while strikingly modern, is not quite anachronistic. But what if anachronism is this show’s game? What if characters don’t change with the times but before the times? How does a person live in that kind of precariousness?

This pilot required a lot of adjustment for me, especially I think because of the way I’ve been trained as a viewer. Despite its fairly mundane setting, this felt like a different mode of address, a generically unrecognizable hour. In part, I think, that’s because this show is concerned with the limits, risks, and possibilities of exposure. What we’re being set up to see is an open-ended series about the toll that telling can take on a person, on a relationship, on a society. From Cheever to Chase and Weiner and Gilligan, there’s been a lot of lying on television for the last 15 years. What does it feel like to stop?

We are doctors for Chrissakes, 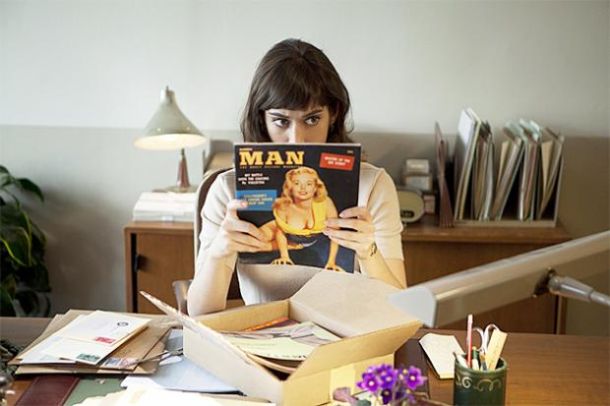