HERE’S THE THING no one wants to admit about televised Christmas movies: they’re all horrible. Don’t get me wrong, there are beautiful moments in every Christmas movie: when Kevin rigs the entire house to look like a party dancing to “Rocking Around the Christmas Tree,” for example, in Christmas classic Home Alone, or every time White Christmas gives up the facade of being an actual movie instead of a Bing Crosby showcase.

But Christmas, at least in its modern, capitalist, de-Jesusified form, is an ideological construct that’s supposed to connote “family” and “love” and “celebration.” Many times, those feelings do arise — for me, it happens in the moment when my brother and I decorate Christmas cookies precisely in the style of our five and eight year old selves, which is to say like an expressionist hyper-sugared art project — but they’re almost accidental, or incidental, to the larger, awkward, passive aggressive interactions that attend family Christmas. It’s not our fault so much as the realities of modern society: most of us don’t live near our families, so when we all get together once (or twice) a year, it’s obviously going to be replete with frisson, which generates both positive and negative heat. The static, bland, overly positive rhetoric of Christmas thus helps paper over the dynamic, piquant experience of it.

And if Christmas is an ideological construct, then Christmas movies are its handmaidens. In each Christmas movie, “Christmas,” as a nourishing, essential event, is threatened in the first act, nearly lost in the second, and regained, in newly valuable, even more cherished form, in the third.

In order for a film to become ritualized, however, it must hew to the ideological formula. It can be a little postmodern splintered, like Love Actually, or be filtered through the lens of comedy, like National Lampoon’s Christmas Vacation, but it must also work to vivify the understanding of Christmas as about family and love, as opposed to its historic ideological engine (Christ) or its contemporary one (Capital).

And it’s not just about family and love, but successful family and love. There’s a reason why the French film A Christmas Tale, a critical darling, isn’t shown on continuous repeat on TNT: the subtitles, sure, but it also refuses to posit Christmas, and the family it “unites,” as utopian or successful. It’s by turns bitter and blackly hilarious, and no one wants to think those things describe Christmas.

Which leaves us with a genre of Christmas television events that are ideologically and narratively similar, with slight variations according to narrative mode (comedy, melodrama). I would say they differ according to desired audience, but the desired audience of the Christmas movie is everyone, which only further unites the films in their PG (maybe PG-13) palatability.

To be clear, I like Christmas movies. Who doesn’t like ideological closure! It is preposterously reassuring! But “liking” something, and reveling in the comfort and joy that washes over me for 120 minutes before I return to the beloved catastrophe of my own family Christmases, is a very different thing than claiming a Christmas movie as “good.” I love the haze of just too much cheap champagne; that doesn’t mean I recognize it, or would tell anyone else, that it’s good.

Which is precisely why Bobby Finger’s taxonomy of Love, Actually is so helpful. As he explains, the film is “a glossy, big-budget film with borderline-detestable examinations of love and romance containing perhaps three genuine moments that seem to be of our own universe, but Love Actually is one terrible Christmas movie that has strong-armed its way into the hearts of millions (including my own) despite being absolutely terrible.”

He then proceeds to break down each of Love, Actually’s nine subplots, dividing what he hates (almost entirely narrative and ideological problems) and what he loves (almost entirely affective traits). For example, in the Hugh Grant/Martine McCutcheon subplot, he hates that it’s “the first of three subplots in which a man falls in love with his female subordinate” and, furthermore, that that subordinate is “constantly referred to as ‘the chubby girl.’” Yet he loves that “Hugh Grant is SO cute when he dances to the Pointer Sisters” and the moment when “she jumps into his arms and he catches her!!!”

Quoted this way, Finger’s points might seem a bit flip, but his tone, exclamation marks, and use of capslock perfectly reflects the affective experience of watching a Christmas movie, which is basically a long series of squeals, sighs, and your mom saying “that’s just great” while everyone else thinks it.

We both love and hate Christmas movies — are repulsed by them in theory and compelled by them in action. Which is precisely how I feel about The Family Stone. Let’s give Bobby’s taxonomy a try:

THE PREMISE: A large, sprawling “modern family” returns to their family home in Snowy Somewhere, New England. The eldest son’s girlfriend (Sarah Jessica Parker) is very uptight and the rest of the family is not very uptight. Hijinks ensue.

After SJP comes home to the liberal judgy family, hijinks do, indeed, ensue — eventually leading to some partner switching, some match-making, and lots of true love. But things have to get really bad first, and everyone has to cry when [huge spoiler for anyone who thought this was actually a romantic comedy, as one would based on the trailer] it’s revealed that Diane Keaton’s breast cancer has returned and she’s dying.

Excuse the capslock: I’m too busy reveling as this particular Christmas ideology aims and hits its target of white, middle-class, educated people.

The Family Stone isn’t everybody’s Christmas movie. In fact, it’s not even that many people’s. It was a moderate hit and receives far less television play than Christmas stalwarts old (It’s a Wonderful Life, A Christmas Story, White Christmas) and new (Love, Actually, National Lampoon’s Christmas Vacation, Elf). But Christmas movie fandom is not as simple as being attracted to the Christmas movie that’s directed at you. Christmas movies are directed at everyone, after all, or at least all white middle-class people, which is Hollywood shorthand for “all people.” It’s how we watch them, and with whom — how they, and their reductive yet charismatic messages incorporate themselves into an understanding of our own Christmases.

Growing up, my family never had a Christmas movie. We had cookie decorating and sledding and other rituals, but a movie was never part of it. As we grew older, and the rituals of childhood became less magnetic, movie-going — specifically, going to a matinee with my brother — became our ritual. But we’ve only seen one actual Christmas movie on Christmas, and that movie was, naturally, The Family Stone. It’s an intensely flawed film, but it marks an important — and one of the few remaining — rituals in my family, which is why I’ll watch it any time it comes on cable, anytime I remember the $4.99 copy I have stashed behind my more reputable DVDs.

In the end, it’s not the movie, or cute Luke Wilson, or even Christmas that I like. It’s the act of watching, and the even more important act of remembering. 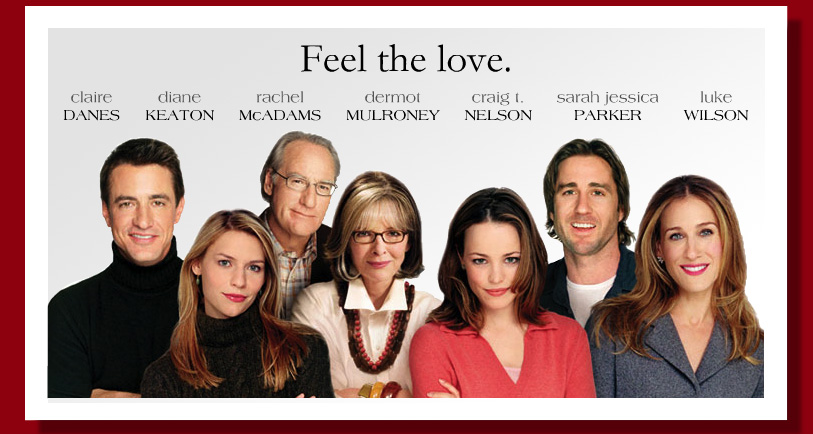