BROOKLYN NINE-NINE — one of Fox’s new sitcoms — begins with a classic expository trick: the viewer’s first introduction into this world coincides with that of new characters’. (As if they weren’t all new to us.) The pilot presents commanding chief Ray Holt (played by an almost virtuosically stoic Andrew Braugher) to his police precinct, which features a solid group of personalities from the unexpectedly-good-at-his-job detective Jake Peralta (Andy Samberg) to charm-monster administrative assistant Gina Linetti (Chelsea Peretti). It might be an old move, getting viewers acclimatized to a sitcom’s cast and environment via one of its own characters, but it works. It might even contribute to why multiple critics have described Brooklyn Nine-Nine as having one of the only solid pilots of this current season. (Which, to be fair, is a feat in any season.).

Brooklyn Nine-Nine is a show about the police that doesn’t fall into the habitual category of dramatic police procedural — yet it’s not without its moments of action or suspense either. The show is, however, predominantly a comedy (couched in Fox’s Thursday night sitcom block between Dads and New Girl) that capitalizes on the presumed discrepancy (at least in television’s ambitious imagination) between police work and humor. Brooklyn Nine-Nine continuously comes up against its own subject matter when, say, Peralta cracks jokes at an elderly woman during the scene of a hold-up. In another scene, Peretti’s character flat-out tells two detectives the obvious fact that “Police are the worst.”

This move of emphasizing what’s absurd or oxymoronic in the banal isn’t exactly a new move for comedians (and this particular cast is filled with them), but I do think Brooklyn Nine-Nine is doing something slightly different in directly pointing to the absurdity, while simultaneously embracing its implications. Police are the worst, but what about these police? There isn’t a single character in the show so far that viewers are against. The show’s attitude is winking and earnest, skeptical and optimistic. In this way, Brooklyn Nine-Nine mirrors its creators’ (Michael Schur and Dan Goor) prior project, Parks and Recreation. And character types are transported across the two shows as well (Holt and Swanson; Rosa and April; Peralta and Knope; Scully and Jerry). With only four episodes under its belt, Brooklyn Nine-Nine has found its pace faster than the unsteady first season of Parks and Rec, but that just goes to show how much might potentially change. Though I do think the show’s gesture — of stating the obvious while also undermining it — gives it a kind of earnestness that, like Parks and Rec returns an infectious hope upon its viewers.

Such hope perhaps means more when you look at the shows that air directly after Brooklyn Nine-Nine (New Girl and Mindy Project), as well as the particular network in which they all currently reside. As Andy Greenwald recently wrote, Fox has, if one disregards Dads, “emerged as the smartest, funniest, and all-around best night of comedy on television.”

The glory days of NBC’s Thursday nights — and I’m including all three decades of greatness here, the Cheers-anchored ’80s, the Friends/Seinfeld ’90s, and the Office/30 Rock aughts — crackled with wit and infectious, rom-comedic possibility. Viewers could park themselves on a single channel, secure in the knowledge that they’d be smartly entertained for at least 90 minutes. It was network TV at its best: both dependable and transporting, an intimate, unmissable party to which the entire country was invited.

In 2013, Fox has firmly supplanted NBC as the host of this party. With Brooklyn Nine-Nine, New Girl, and Mindy Project, we get a series of sitcoms that feel not just inviting or comfortable, but at times even surprising. It’s a tough calculus to achieve, but Brooklyn Nine-Nine seems aware that the contemporary television sitcom needs to be as much a comfortable throwback as it does a novel entity in order to thrive.

About halfway into the pilot, Jeffords briefs the new commanding officer on the precinct, describing Peralta as “my best detective. He likes putting away bad guys, and he loves solving puzzles. The only puzzle he hasn’t solved…is how to grow up.” This seems coincidentally to be the fundamental puzzle of most male characters on television sitcoms — but might the same be said for the television sitcom itself? Is the television sitcom growing up, and it is, of all places, doing so under Fox?

To present male leads as exceptional at their jobs, yet adolescent-to-the-point-of-dysfunctional in their social lives is a familiar trope, and you find it in comedies and dramas alike (I wonder how much Peralta might be a play on The Wire’s McNulty). It’s almost a fantasy of the predominantly male-driven world of sitcoms to allow men to have it both ways. While a commentary on male privilege in general (oh, let us not bring up Dads), it affects the sitcom structure from narrative content down to its very form. In order to keep the repetitious plot of the sitcom world in motion, one must never let its men grow up too quickly, if at all. Perhaps a less dire way of looking at it: if men acted like adults, where would we find the comedy? But even this view is exhausting and potentially exhausted by now, for jokes about “the boy can’t help it!” are practically as old as the epic story.

Perhaps Molly Lambert’s category of the Manic Pixie Dream Boy (who “builds up the heroine’s self-confidence, providing comfort, inspiration, and nurturing vibes without demanding anything in return”) would be better suited not to describe male characters that are unbelievable, but are all too much so? The Manic Pixie Dream Boy isn’t a female fantasy in the same way the Manic Pixie Dream Girl is for men. He is neither docile, comforting, nor inspiring for our heroines. But this doesn’t preclude him from acting, in a way, as a kind of female fantasy. Rather, he is, like his female counterpart, forever immature, coyly incompetent, and cutely fumbling in his efforts — and yet surprisingly capable in accomplishing his culturally prescribed roles (here, solving crimes or catching the “bad guys,” as Peralta puts it, rather than baking a pie). Unlike the Dream Girl, however, our Dream Boys are often presented with a knowing wink.

Indeed, to call attention to the meta-ness of its types, Brooklyn Nine-Nine begins with Andy Samberg’s Peralta talking into a recording device in a camera store that then rebroadcasts his grinning talking head in the many screens populating the store. TVs within our TVs! The emphatic media framing — and subsequent reframings — of this opening scene, though, forces viewers to question not just Peralta as a character, but Brooklyn Nine-Nine as a show. Where are we, what genre is this, and how much do we trust the talents of this obvious goofball? (Peralta solves the crime by finding a hidden camera in a teddy bear, and then proceeds to mime in a baby-voice as the teddy bear to what we later learn is his co-worker/crush. I mean.) It’s a clever establishing scene by the show, but it’s also vastly forgiving to its male lead.

The competent and endearing manchild, though, seems to be a trend across Fox’s Tuesday night comedy bracket, and I’m wondering how much we are expected (or should) forgive it. I mean, is it really all that cute? There were moments when Samberg’s Peralta could easily substitute for Max Greenfield’s Schmidt in New Girl (another character who is notably good at his job, interested in fonts, yet absurdly immature and maladroit in his social life). Both Peralta and New Girl’s Winston “loves solving puzzles,” and both sometimes do it with their pants off (though, to be fair, the latter only likes puzzles — he isn’t all that good at them). This season of the New Girl has Zooey Deschanel as the most grounded character of the entire cast — an almost complete reversal from how she was introduced to the show. Instead, we have her dating Nick Miller — failed lawyer but hacky-sack-cool-kid — who shows development this season because he’s able to express his feelings. This is, of course, played up for laughs, as Nick pours forth on his opinions about the weather and horses and magic, stream-of-consciousness-style. In Mindy Project, our eponymous protagonist moves between being engaged to Blake Anderson (of Workaholics fame), to going on a date with Ike Barinholtz’s Morgan Tookers, to flirting with Glenn Howerton (aka Dennis Reynolds from It’s Always Sunny). Manchildren all around! Are these really our only romantic options?

Brooklyn Nine-Nine and Mindy Project especially feel new because they are playing on our knowledge of narrative tropes (police procedural and rom-com respectively), but I’m not sure how far this can be sustained. Perhaps the sitcom needs to grow up? Or maybe what I’m imagining is exactly what the sitcom doesn’t need — for if Greenwald is right in that Fox offers us a place of reassurance and comfort, then the network sitcom must never truly develop. 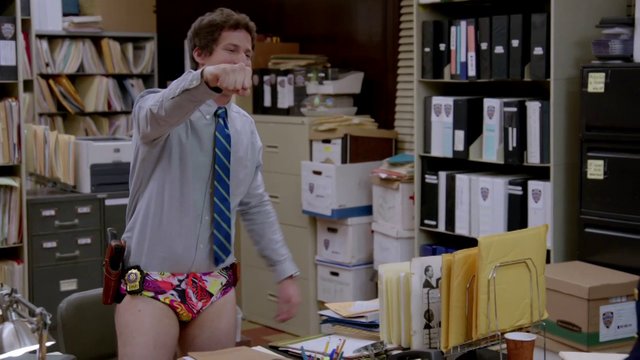