With one major exception: the Justice Department, which isn’t led by the “Secretary of Justice” but by the “United States Attorney General.”

The difference matters, and William Barr’s disgraceful performance in the job, especially in his appearance this week before the Senate Judiciary Committee, shows why.

Our word “secretary” comes from the Latin secretarius and is related to the word “secret.” A secretary in both its ancient and modern meanings is someone entrusted with someone else’s private or secret matters. Originally it referred to those who carried on the private correspondence of powerful and important people. Kings, queens, emperors, sultans, popes. Over time its meaning grew to include those who oversaw the confidential business of powerful people more generally.

Then under Elizabeth I “Secretary” became a title bestowed upon a small number of high officials and advisers invested with the personal power, authority, and prestige of the Crown to see that the monarch’s will was done.

That’s the sense in which we use the title “Secretary” today to refer to members of the President’s Cabinet.

THE ATLANTIC But William Barr doesn’t see it that way. Not, as Adam Serwer writes, because he’s some kind of Trump flunky: “Barr is not protecting Trump because he thinks Trump is the most accomplished president in modern history, because he fears Trump, because the real-estate mogul has some psychological hold on him, or because he has been corrupted. Barr is defending Trump because Barr is a zealot … a hardened ideologue who believes that the president he serves is largely above the law.”

Not just this president. Any president. Barr is a fierce believer in the “theory of the unitary executive” that holds presidents can pretty much do whatever they want if they think — or tell themselves — they’re acting in the country’s best interests.

Or as torture apologist John Yoo put it, when asked whether the president could order a child’s testicles crushed: “I think it depends on why the president thinks he needs to do that.”

Of course this theory of imperial presidential power only applies to Republican presidents. “Democratic presidents,” as Serwer writes, “become tyrannical figures the moment they take office.”

THE NEW YORK TIMES James Comey wrote a compelling first-hand account of the psychological hold Trump has on others around him: “Amoral leaders have a way of revealing the character of those around them. Sometimes what they reveal is inspiring … But more often, proximity to an amoral leader reveals something depressing. I think that’s at least part of what we’ve seen with Bill Barr and Rod Rosenstein. Accomplished people lacking inner strength can’t resist the compromises necessary to survive Mr. Trump and that adds up to something they will never recover from. It takes character to avoid the damage, because Mr. Trump eats your soul in small bites.”

THE ATLANTIC Ben Wittes wrote the single best summary of Mueller’s report. His chief takeaways: Trump committed crimes and impeachable offenses; he wasn’t complicit in the Russian social-media conspiracy, which was nonetheless really bad; his complicity in the Russian hacking operation and his campaign’s contacts with the Russians present a more complicated picture; and the counterintelligence dimensions of the entire affair remain a mystery.

His bottom line: “Here’s what I see in the story Mueller has told on Trump engagement with the Russians over the hacking. I see a group of people for whom partisan polarization wholly and completely defeated patriotism. I see a group of people so completely convinced Hillary Clinton was the enemy that they were willing to make common cause with an actual adversary power who was attacking their country to defeat her.”

POLLS POLLS POLLS It was a big week for Joe Biden, who surged among Democrats and Democratic-leaning independents following the official announcement of his candidacy. Quinnipiac’s results were in line with other major polls, and saw Biden with 38% of the vote, followed by Warren (12%), Sanders (11%), Buttigieg (10%), Harris (8%), and O’Rourke (5%), with no other candidates breaking 2%. Biden was up 9 points from Quinnipiac’s March poll, Sanders down 8, O’Rourke down 7, and Harris even.

Biden’s surge is powered by a Democratic Party base that’s older, less white, less educated, and more moderate than many think. Especially those who spend a lot of time on online. A majority of Democrats are over the age of 50, at least 50% describe themselves as moderate or conservative, and a majority lack a college degree.

And nearly half of black women said they supported Biden in a new Morning Consult poll. Biden was the top choice of 47% of black women, giving him a huge lead over Bernie Sanders (18%) and Kamala Harris (9%). Biden also had the most support among white women, with 36% of white women naming him as their top choice.

Quinnipiac, by the way, also reported that 70% of all US voters, including 46% of Republicans, say they are open to electing a president who is a gay man. But voters said 52% to 36% that the US isn’t ready to elect a gay man as president — a sizable gap between voters perception of their own and others’ openness to voting for a gay man, a gap which is certainly better than the reverse, and should narrow over time.

THE NEW YORK TIMES The Times did a deep-dive into Biden-mentum in his native Pennsylvania, a 2020 must-win for Democrats where Trump won by a mere 44,000 votes — and African-American turnout was down 130,000 from 2012. The Times reports Biden began his campaign for president there with substantial support from 3 key constituencies: suburban moderates defecting from the Republican Party under Trump, black voters who were underwhelmed by Hillary Clinton, and white working-class voters.

THE LOS ANGELES TIMES Soaring deductibles and medical bills are pushing millions of American families to the breaking point, fueling an affordability crisis that is pulling in middle-class households with employer-based health insurance — the most common form of coverage for working-age Americans, and which has undergone a rapid transformation in recent years. Obamacare provided protection to Americans once shut out of health coverage. But didn’t focus on the run-up in costs for people covered through work. As recently as 2006, nearly half of workers had a health plan with no deductible at all and the average deductible for a single worker was just $379, adjusted for inflation. By 2018, that figure had more than tripled to $1,350. Over the same time, insurance premiums also increased, rising at more than double the rate of inflation and outpacing wage gains.

HUFFPOST Jonathan Cohn looks at the “Medicare for America” plan from Reps. Rosa DeLauro (D-Conn.) and Jan Schakowsky (D-Ill.). It envisions creating a comprehensive public insurance plan that would automatically absorb at least half the US population and be open to anybody who wanted to enroll. But the measure would allow employers to keep offering private coverage, giving employees of those firms the option of sticking with a company plan. This is important because Kaiser Family Foundation polls show that while “Medicare-for-all” is fairly popular, most voters think they’d be able to keep their current insurance and it’s unlikely “Medicare-for-all” will remain as popular once people realize that they can’t. Meanwhile, “Optional Medicare-for-all”, i.e. a public option, polls very well, and won’t come with any surprises for people who like their employer-based plan: The main appeal of Medicare for America is its potential to achieve much of what the Sanders proposal would, without all the disruption. Medicare for America wouldn’t wipe out employer coverage. But it would address the problems identified in the Los Angeles Times article. It would set a higher standard for what employer coverage must include ― in effect, requiring that all private plans be as comprehensive as the “gold” level insurance now available through the Affordable Care Act. Gold plans must be generous enough to cover 80 percent of the typical person’s medical bills and most employer plans today meet that threshold. Employer-based plans that don’t meet those thresholds would have to upgrade their offerings or drop them altogether, enabling employers to join Medicare for America.

MIAMI HERALD Florida’s Republican-controlled legislature is moving to gut a constitutional amendment passed by an overwhelming majority in November to restore voting rights to most felons (excluding those convicted of murder or felony sex offenses) once they served their time. But Florida’s Republican lawmakers want “time” to include court-mandated fines, fees, and restitution. Critics say this is modern day poll tax and could block over 500,000 people from the ballot box. Amendment 4 was passed by 64% of Florida voters and was largest expansion of voting rights since Voting Rights Act. Black Floridians make up half the former felon population, and zero percent of the Republicans in Florida’s House and Senate.

Meanwhile, in MOTHER JONES Ari Berman writes: “The move to gut Florida’s Amendment 4 is part of a broader effort by Republican-controlled states to restrict access to the ballot after voters approved ballot initiatives in November’s midterm elections to expand voting rights and elected Democrats who supported policies like automatic voter registration and felon reenfranchisement.” He also cites efforts in Tennessee, Texas, and Arizona to criminalize efforts to register voters similar to those used successfully to register tens of thousands of new black voters in 2018.

PRO PUBLICA In April 2017, Chinese President Xi Jinping visited Mar-a-Lago for a two-day summit. Trump and a dozen of his closest advisers hosted Xi and the Chinese delegation for dinner at the club. Later that night, a group of Trump aides went to Mar-a-Lago’s Library Bar, a wood-paneled study with a portrait of Trump in tennis whites (titled “The Visionary”) and asked the bartender to leave the room so it “could speak confidentially,” according to an email written by Mar-a-Lago’s catering director. As the Secret Service guarded the door, the bartender wasn’t allowed to return and members of the group began pouring themselves drinks. No one paid. Six days later Mar-a-Lago charged the White House for 54 premium drinks (Chopin vodka, Patron and Don Julio Blanco tequila, Woodford Reserve bourbon) worth $838 plus a 20% service charge. The bill was sent to the State Department, which refused to pay. It was then sent to the White House, which picked up the tab.

I’m stunned the Dems haven’t pounded away at this in a relentless and coordinated way. There’s a lot going on. I know. But this is low-hanging populist fruit.

VOX The rapid implementation of facial recognition technology across the country is sparking a backlash and miring companies like Amazon, Apple, and Microsoft in lawsuits and controversy. The technology is good at identifying the white male faces it was trained on, but often misidentifies women and people of color, leading to false arrests. San Francisco is considering banning use of the technology by local government, and so are Massachusetts and Washington State. The US Senate is considering a bipartisan bill to regulate its commercial use. 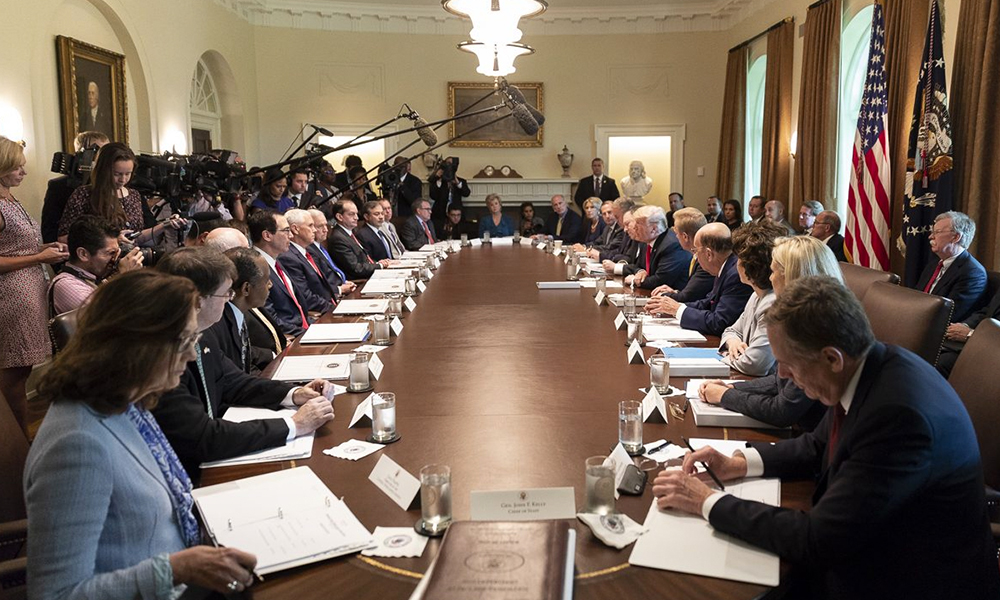