More links and thoughts below on Mueller’s more-lightly-redacted-and-more-damning-than-I-expected report.

But first, a story that’s been lost in its geyser of revelations. A story that proves yet again my old boss Mike Kinsley’s oft-quoted and ofter-true saying that “the scandal isn’t what’s illegal, it’s what’s legal.”

Mueller’s 448-page report reveals in exhaustive detail how after the election Putin directed Russia’s wealthiest and most powerful businessmen to reach out to people in Trump’s orbit to establish backchannel lines of communication and influence, and how eager Trump’s associates were to accept their overtures. One such TrumpWorld figure was Rick Gerson, a small hedge fund manager and, more importantly, a longtime close friend of Jared Kushner.

After the election, Mueller reports, Gerson was introduced to Kirill Dimitriev. Dimitriev runs Russia’s state investment fund and reports directly to its real boss, Putin. In follow-up texts and emails after their late November meeting, Dimitriev dangled lucrative investment opportunities in front of Gerson. The two also worked on what Dimitriev implied was a Putin-approved US-Russia “reconciliation plan.” Dimitriev also asked Gerson if he knew Erik Prince, the billionaire Blackwater founder and brother of Betsy DeVos, and if Prince was someone it was worth him getting to know. (Mueller also revealed Prince helped fund a secret effort to obtain Hillary’s e-mails from shady figures operating on the dark Web.)

All this was, to put it mildly, Gerson’s first foray onto the geopolitical stage and into the thicket of US-Russian relations. But in mid-January Gerson forwarded “their” plan to Jared, who gave copies to Steve Bannon and Rex Tillerson. Later that month, after Trump and Putin spoke on the phone, Dimitriev texted Gerson that their plan “played an important role in the success of the call.” Gerson and Dimitriev stopped communicating sometime in March 2017 following then-FBI Director Jim Comey’s first public confirmation that the FBI was investigating Trump’s Russia ties. And that’s the last reference to Gerson in Mueller’s report.

It’s not mentioned in Mueller’s report, but NBC News reported on June 1, 2018 that he was interested in why Gerson was in the Seychelles in mid-January 2017 around the same time Erik Prince met secretly with Dimitriev and United Arab Emirate officials, including Emirati Crown Prince Mohammed. Mohammed runs the UAE’s state investment fund and had previously placed money with Gerson. Gerson’s spokesperson denied to NBC that Mueller had taken an interest in him, and said it was a coincidence Gerson was on vacation at that time in the remote Indian Ocean island nation off the East African coast — — and that while he did meet there with Crown Prince Mohammed and George Nader, a senior UAE advisor who arranged the Erik Prince-Dimtriev meeting, Gerson didn’t know anything about it.

NBC broke the story on June 1. Footnotes in Mueller’s report indicate Gerson spoke to the Special Counsel’s Office on June 5 and June 15, 2018. On June 6 Hedge Fund Alert, an industry website, reported Gerson was starting a “hedge fund-seeding business” with a $1 billion investment from Crown Prince Mohammed. Hedge Fund Alert noted Gerson was “an unusual choice to run a hedge fund-seeding business, since he appears to have little, if any, experience in that field.” By the way, Gerson told Mueller, and Mueller apparently accepted, “that the Transition Team had not asked him to engage in [his] discussions with Dimitriev, and that he did so on his own initiative and as a private citizen.” As a result, none of his dealings with Dimitriev count as a link between “the Russian government and the Trump Campaign.”

Now on to Mueller’s report.

THE MUELLER REPORT It’s a great mystery how William Barr thought he could get away with so blatantly misrepresenting the plain words of Mueller’s report. Did he think he’d be able to suppress it and no one would ever read it? Did he only care about providing clips and sound bites for Fox News and the right-wing media bubble clearing Trump? Compare what Barr wrote in his letter four weeks ago purporting to summarize Mueller’s conclusions  —

— with what Mueller actually wrote:

— he forgot to mention that Mueller’s was:

While Mueller decided he couldn’t indict Trump, he concluded he should still investigate Trump because, among other reasons, Trump could be indicted after he leaves office —

Which brings us to the two most important passages in Mueller’s report. This one —

Translation: I don’t think I’m allowed to indict Trump for obstruction. And I don’t think it’s fair to accuse him of a crime I can’t charge him with. But I’d tell you if I thought he didn’t commit a crime. And I’m not telling you that.

And this one, in which Mueller makes clear he intended his report to be an impeachment referral to Congress, and didn’t leave it to Barr to hijack the report and make any legal conclusions as to guilt or innocence:

It’s no mystery to me why Trump went to such great lengths to obstruct justice in the absence of an underlying crime. He thought there was an underlying crime! He knew full well what he and his campaign did, and had no idea Rosenstein and Mueller would later adopt a very narrow definition of criminal conspiracy — “an agreement between the Trump Campaign and the Russian government on election interference” in which there was no election interference if no one on the Trump campaign was literally involved in the Russian hacking — to let him off the hook. LAWFARE What Mueller Found on Russia and on Obstruction: A First Analysis. This is the single best summary of Mueller’s report. “Mueller emphatically did not find that there had been ‘no collusion,’” the Lawfare editors write:

He found Trump and the Trump campaign were aware the Russians sought to help them win. They welcomed that assistance. Instead of warning the American public, they instead devised a public relations and campaign strategy that sought to capitalize on Russia’s illicit assistance. In other words, the Russians and the Trump campaign shared a common goal, and each side worked to achieve that goal with basic knowledge of the other side’s intention. They just didn’t agree to work together toward that goal together. And he describes as well a pattern of behavior on the part of the president in his interactions with law enforcement that is simply incompatible with the president’s duty to “take care” that the laws are “faithfully executed” — a pattern Mueller explicitly declined to conclude did not obstruct justice.

THE WASHINGTON POST Trump is a cancer on the presidency. Congress should remove him. This is the single best opinion piece I’ve read on the report. It’s by, of all people, arch-conservative super-lawyer George Conway, Kellyanne’s husband. I don’t know what game they’re playing. Maybe they’re not playing a game. But their vehement public split over Trump has been one of the more bizarre subplots of the last two years. On Thursday Kellyanne said Mueller’s nearly two-year investigation was a “political proctology exam and the president has been given a clean bill of health.” George disagreed: “Americans,” he writes, “should expect far more than merely that their president not be provably a criminal. In fact, the Constitution demands it.”

THE WASHINGTON POST Robert Mueller failed to do his duty. Ron Klain, Democratic super-lawyer and a senior advisor to both Clintons and Obama, writes, “if expectations were too high for Mueller’s report, the inevitable disappointment was exacerbated by how Mueller fell short in what he delivered.” He starts with Mueller’s failure to get Trump to sit down for an interview, when Bill Clinton and George W. Bush both submitted to interviews with special counsels. He also criticizes Mueller for not bringing campaign finance charges against Don Jr. for soliciting foreign assistance to damage Hillary Clinton’s campaign (the Trump Tower meeting), and for conspiring with WikiLeaks: “It is this Mueller decision—which enabled Trump’s ‘no collusion’ boast — that merits the greatest scrutiny in the days ahead.”

THE WASHINGTON POST The Post reports, “Trump seethed Friday over the special counsel’s portrayal of his protracted campaign to thwart the Russia investigation and directed much of his ire at former White House counsel Donald McGahn, whose ubiquity in the report’s footnotes laid bare his extensive cooperation in chronicling the president’s actions.” Mueller’s report includes this classic scene between Trump and McGhan over McGahn’s note-taking:

To be fair, Trump’s not alone here: https://www.youtube.com/watch?v=pBdGOrcUEg8 THE NEW YORK TIMES “Mueller Hints at a National-Security Nightmare.” The missing piece of the report is a counterintelligence investigation that should set off alarm bells about our democracy and security. The Mueller report isn’t actually close to a full account of Mueller’s investigation, write Joshua A. Geltzer and Ryan Goodman:

That’s not just because of the redactions. When he was hired, Mueller inherited supervision of an FBI counterintelligence investigation. That is the missing piece of the Mueller report. President Trump may claim “exoneration” on a narrowly defined criminal coordination charge. But a counterintelligence investigation can yield something even more important: an intelligence assessment of how likely it is that someone is acting, wittingly or unwittingly, under the influence of or in collaboration with a foreign power…. The public Mueller report alone provides enough evidence to worry that America’s own national security interests may not be guiding American foreign policy.

TO IMPEACH OR NOT TO IMPEACH That is the question facing Democrats now. It’s a sign of the dysfunction of our politics that it’s only a question for Democrats. But here we are. It’s a question I’ve not resolved myself. I’ll look at the arguments on both sides next week.

And moving on from the Mueller Report, a few stories that caught my eye:

THE WASHINGTON POST Biden is expected to announce his campaign Wednesday. The Post reports he plans a campaign that will cast him as an extension of Obama’s presidency and political movement. He’s betting that the majority of Democratic voters are eager to return to the style and substance of that era — and that they’ll view him as the best option to lead the way back. Though there is deep affection for Biden among Obama’s team, many privately question his skills as a campaigner and fear a losing run will damage his reputation as a beloved elder statesman.

THE WALL STREET JOURNAL I thought this was interesting — And this was very interesting: Google search data shows Sanders is the candidate most searched for across much of the nation. Regional search distribution shows Biden sparks outsize interest in the Upper Midwest, Harris in the South, Northern California, and Nevada. The most intense interest in Buttigieg is in a small area around his home city. Interest in Texas, O’Rourke’s home state, is split. I was surprised at Booker’s strength in Texas and Arizona. This map also looks good for Harris, whose path to the nomination is through the South, starting in South Carolina. Nearly 4 in 10 voters in the 2016 South Carolina Dem primary were African-American women. Booker and Beto also snagged endorsements there in recent weeks.

TWEETS OF THE WEEK Two this week, for a super-sized week. This one made me laugh — — and this one made me cry each time I watched it (click on the link below): 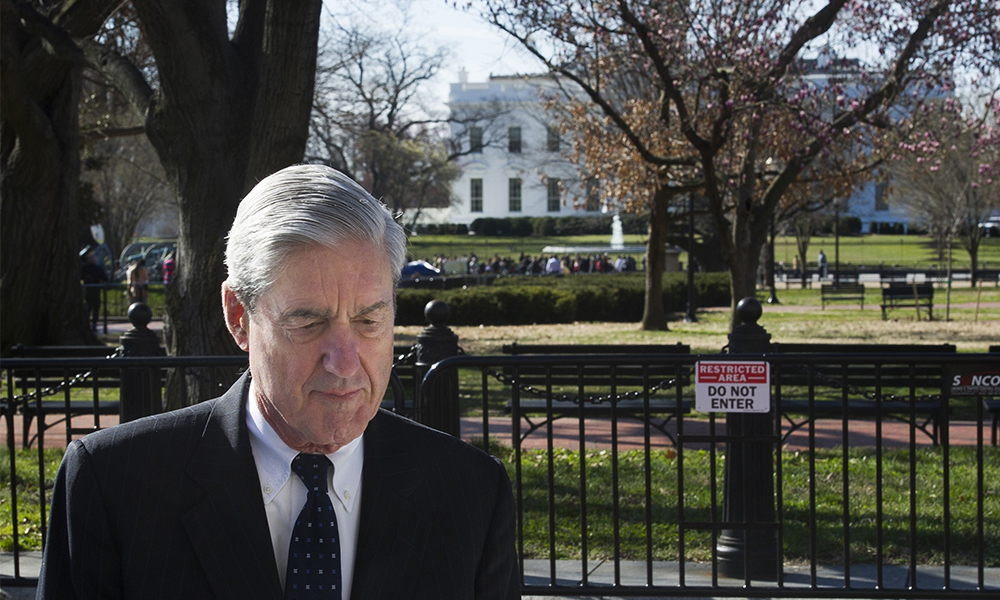