The cochineal is a small insect belonging to the suborder Strnorryncha, a division of bugs known more for the color they produce after death, when crushed: natural red #4, also called carmine. Artist Sandy Rodriguez uses the insect to produce its characteristic dye to paint maps of a dystopic, alternative Los Angeles, where skull-faced helicopters circle a Camino Real mission — a mission that has become a contemporary jail.

Rodriguez is one of this year’s recipients of the COLA Individual Artist Fellowship, an award of $10,000 given to eleven mid-career artists from the City of Los Angeles’ Department of Cultural Affairs. For visual artists, the grant culminates in a group show at Barnsdall Art Park’s Los Angeles Municipal Art Gallery (LAMAG).

This year’s awardees are fearsome. The gallery bursts with large-scale, ambitious projects that each engage the disparate, loud strangeness of life in Los Angeles individually and as an unmistakable whole. The exhibition is emblematic of the dedication of the gallery to their larger project: to support emerging, diverse artists and, in gallery director Isabelle Lutterodt’s words, “to provide Angelenos… with a civic space [to be] self-reflective, where they can turn to wonder.” Free admission and inclusive public programming are one tradition of the gallery, an increasingly rare non-profit municipal offering (LACMA, by contrast, raised its GA price to $20 in 2017). Lutterodt and exhibition curator Ciara Moloney remain singularly focused on the insular, radical legacy of LAMAG in a city recently flooded with the Paramount-Studios art market elite.

In 1927, oil heiress Aline Barnsdall bequeathed her land in a deed to the city that included the Frank Lloyd Wright-built Hollyhock House. The city block was then called Olive Hill, the future home of Barnsdall Art Park.

Aline Barnsdall envisioned the hillside between Hollywood and Sunset “to be this cultural campus — she wanted artists’ studios, a theater, a gallery,” Lutterodt told me. However, Wright’s focus was elsewhere — he was building Tokyo’s Imperial Hotel at the time — and the project was delegated to assistant Rudolph Schindler and never completed. The city, too, has struggled with the area, pumping in close to $21 million for the historic house and park in a revitalization project that more-or-less concluded in 2015. Rocked by the 1994 Northridge quake, large sections of the Hollyhock House fell into disrepair. In 2014, the Los Feliz Ledger decried a “surge in trash, homeless encampments, graffiti and vandalism” at the park. It’s also happens to be my favorite overlook in LA — maybe because of its dirty imprecision and seemingly half-finished landscaping, far superior to the Whole Foods-adjacent Silver Lake Reservoir or tourist-flooded Griffith Park.

Despite its long history, the municipal art gallery struggles for definition in the wooly terrain between the commercial art world and more established public museums like LACMA or the Hammer.

Lutterodt, Moloney, and fellow curator Steven Wong recently revamped the mission statement to clarify the gallery’s position within the huge and amorphous Department of Cultural Affairs. Much of the relatively new group at LAMAG drew from the work of late curator Josine Ianco-Starrels, who established the gallery as a juggernaut of young talent in the 1970s and 80s. Ianco-Starrels put up David Hammons’ first major Los Angeles exposition in 1984 along with Senga Nengudi, Sam Gilliam, and Howardena Pindell. Like the current team, Ianco-Starrels saw the gallery as an accessible cultural locale dedicated to being “responsive to the human experience in Los Angeles,” a phrase front-and-center in the new mission statement. “The human experience in LA is not a monolith,” Lutterodt said. “There are macro and micro communities. What we try to do is create an experience [that] brings all of that to life.”

But non-profit experiences do not have much cache in the LA art world that runs increasingly, as Moloney said, “on the capitalist treadmill.” The gallery does not sell any of the work it exhibits, nor does the work enter a collection held by LAMAG — because there isn’t one. “I always tell people we are unburdened by a collection,” Moloney said. “And they laugh. They say, why is a collection a burden? But we are never duty-bound to previous decision-making.”

With acquisitions and for-profit sales out of the question, the small team at LAMAG focuses on developing accessible programming — there will be a foraging workshop,  and a collage day for COLA — while making room for artists who, as Moloney said, “might be the grandes dames of LA one day.” The gallery’s independence from collectors and “duty-bound” purchases uniquely allows it to focus on the art on view — “to be responsive,” as the mission statement declares, to contemporary art in the city. The gallery’s cottage cheese ceilings and mid-century cement blocks breathe LA: stuck in time, oozing lifestyle, and a curious resistance to the mainstream. I’m not sure what a New York collector would do here. Cry?

It’s not just the gallery. COLA 2019 seems to lurch with anti-commercial, municipal pride. Kim Fisher’s large-scale collage Los Angeles Hedge (Torn Vermillion, Torn Nickel Yellow, Very Good Genes, Dum-Dums / Fruit Punch, Benedict Canyon) is the central eye candy of the show, where large swaths of distinctly manicured grass fences mingle with newspaper cutouts and a lollipop wrapper. “I was excited to make a piece drawn from my experiences of the city,” said Fisher in our email chain. “It’s about location and [it’s] meant to have a ‘sidewalk nature.’” It looks like a billboard ran into a Sherman Oaks McMansion, a sight not far from Angeleno reality. The works in COLA seem to be surprised by the presence of others, reluctantly negotiating relationships between each other. Enrique Castrejon’s wall-based sculptures draw from his experiences working at an LGBTQ center in LA. Strips of string-like paper printed with purported “facts” about AIDS strap male bodies against the gallery walls, throwing the coolness of text against floating, dismembered figures. Sabrina Gschwandtner is in the next room, where a dense weave 16mm strips culled from Alice Guy-Blaché and Germaine Dulac’s work form the “film quilts” the artist is known for. Texturally and figuratively, they ignite each other: a testament to Moloney’s ability to construct a grant exhibition for eleven artists who decided to, like Fisher noted, “go big or go home.” When I suggested potential themes of the exhibition to Moloney, she laughed. “If I could find one thing that would unify them all, it would be so general as to be redundant.” Unmoored from financial and spatial constraints, the fellowship’s fruitful results seem to explode beyond its borders. Grandes dames, indeed.

In a 1916 letter to playwright Mary Ann Hustin, Aline Barnsdall outlined her vision for East Hollywood’s Olive Hill. “California has me by the throat,” she wrote. “There is a largeness of spirit here that will penetrate the souls of the second generation.” Second, third, fourth, fifth — Barnsdall’s dream resulted in the oldest non-profit art exhibition space in the city.

In 2019, on top of Barnsdall’s mount, a stunning Frank Lloyd Wright house meets an art gallery meets a park that doubles as a historic gay cruising site (a topic examined by the artist Cassils in last year’s show). Fisher’s green hedges seem to blur with the red of the cochineal, which was used by not one but three artists in COLA: Rodriguez, Katie Grinnan, and Alice Könitz all used the insect’s vibrant dye. The colors look like juice boxes, street corners, stoplights. Cohabitation may not be the Angeleno’s natural state — but the artists of COLA 2019 make it look easy, drawing a fierce and uncompromising civic pride to the fore. The exhibition comes at an important turning point for the gallery and the city: in July, the Hollyhock House is up for nomination as a UNESCO World Heritage site. The designation would guarantee the secured protection of Barnsdall’s bequest and undoubtedly draw a larger number of visitors to the park and its accompanying facilities. Cochineal dye, as far as we know, lasts forever without fading. I can only hope for the same at the Hollywood hilltop. 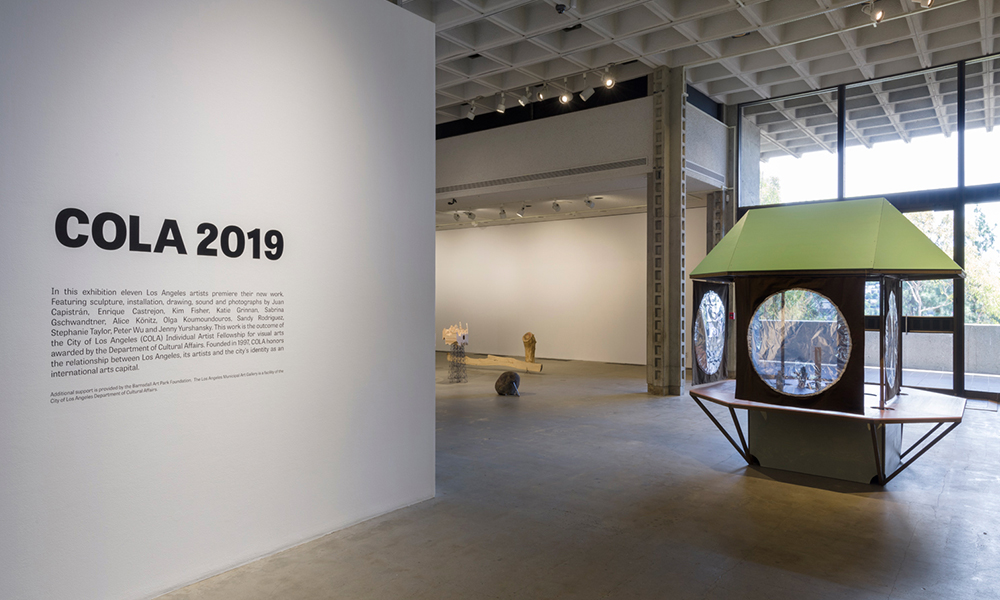