On a recent visit to Beijing, I spent a few hours one Saturday afternoon wandering the grounds of Yiheyuan, or Summer Palace, in the city’s northwest. The “palace” — generally called the “New Summer Palace” to differentiate it from an earlier one that foreign armies destroyed in 1860 — is not a European-style royal complex, with one massive central building anchoring the site. Rather, the grounds are sprawling and dotted with small pavilions where the emperor would relax in the company of his family and friends. Kunming Lake serves as the center of gravity in the garden, inviting visitors to sit and contemplate its depths or venture out in one of the boats available for rental.

I, as always, wound up at the lake’s oddest feature: a marble paddleboat permanently “docked” along the northern shoreline. The Marble Boat is a legacy of the Empress Dowager Cixi (1835–1908), one of the most reviled characters in modern Chinese history. Cixi entered the imperial household as a concubine before rising to serve as co-regent for her young son upon the Xianfeng Emperor’s death in 1861; when her son died in the mid-1870s, she installed her toddler nephew on the throne, assuring herself another regency period. Cixi, therefore, was de facto ruler of China for almost all of the latter half of the nineteenth century, an era when the country faced unprecedented foreign threats and mostly failed to handle them. Even before her death, which would come only three years before the Qing Dynasty fell, Cixi found herself the object of blame for the country’s troubles.

The Marble Boat has long served as shorthand for all that was wrong with Cixi’s rule. A scenic spot for small parties, it was constructed with funds intended for the imperial navy, which Cixi convinced her nephew’s father to divert to the Summer Palace project. Cixi hoped that the palace would be completed in time for her sixtieth birthday in 1894. The celebration had to be canceled, however, when China became entangled in a war with Japan that year — a war that China would lose, in part, because the Japanese were the superior naval power.

It makes for a good story: “We needed a navy, and all we got was this marble boat.” But it’s a simplistic narrative that draws Cixi as a one-dimensional Dragon Lady, a demonic figure who seized power and then didn’t know how to wield it. Further contributing to this sinister vision of Cixi is her allegedly insatiable sexual appetite, rumors of which were spread by Sir Edmund Backhouse, a British con man who claimed to have had an X-rated affair with the empress (recounted in a lurid memoir not published until 2011, Decadence Mandchoue, though his stories circulated earlier).

Make no mistake: Cixi was certainly a ruthless politician, and it’s possible that she played a role in her nephew’s death, which preceded her own by a day (in 2008, forensic scientists found that he died of arsenic poisoning). But over the past century, Cixi’s reputation has been so blurred by a film of “Confucian chauvinism and Orientalist aspersion,” as Orville Schell and John Delury aptly put it in their new book, Wealth and Power: China’s Long March to the Twenty-First Century, that few inside or outside of China have recognized her efforts to right the country’s course, halting and incomplete as they were.

Cixi is the only female figure that Schell and Delury spotlight in their book, each chapter of which is a capsule biography of a personage who sought to further China’s pursuit of wealth and power between the early nineteenth century and today. The pair present an evenhanded assessment of her rule, pointing out that while Cixi failed to sponsor a massive overhaul of the Chinese government similar to the Meiji Restoration in Japan—which might have helped steer China through the rough waters of the late 19th century—she did approve smaller reform projects and was far from the knee-jerk conservative that her detractors, both past and present, have claimed. Cixi’s biggest shortcoming, Schell and Delury suggest, was not a blindness to China’s struggles in a changing world, but a lack of decisiveness concerning how best to address them.

Schell and Delury make a solid, if cautious, case for rehabilitating Cixi, but their chapter on the empress dowager will likely be overshadowed by China-born but longtime Britain-based author Jung Chang’s just-released biography, Empress Dowager Cixi: The Concubine Who Launched Modern China (which I have not yet read). Chang, author of the mega-bestselling Wild Swans: Three Daughters of China and co-author of a controversial biography of Mao Zedong published in 2005, promises readers a complete reassessment of Cixi, one that emphasizes the empress’s forward-thinking, outward-looking moments. She speaks of Cixi as a champion of women’s liberation and China’s modernization, and absolves the dowager empress of guilt for all her alleged sins, including her nephew’s death.

It is surely past time for new insight into Cixi, to look beyond the Dragon Lady archetype and consider her years in power with a fresh eye. But to give her credit for “launching” modern China seems to me a step too far. Popular opinion might have allotted Cixi a disproportionate amount of blame for the Qing Dynasty’s fall, but she does deserve at least some of it. Though she tried to navigate China through the turbulence of the late 19th century, Cixi’s efforts were hindered by her blind spots and hesitations, as well as her desire for personal glory and love of luxury. The Marble Boat’s presence in the New Summer Palace stands as an all-too-real reminder of Cixi’s shortcomings and Marie Antoinette-like episodes.

In interviews linked to her new book, Jung Chang makes clear that she wants us to see Cixi as a fearless seafarer, heroically leading China as the country embarked on an epic journey. Schell and Delury favor the view that I also support: of Cixi as a nervous sailor, curious about what lies beyond the horizon but unable to shake the conviction that in the end, she and her country would be safer if they remained at port. 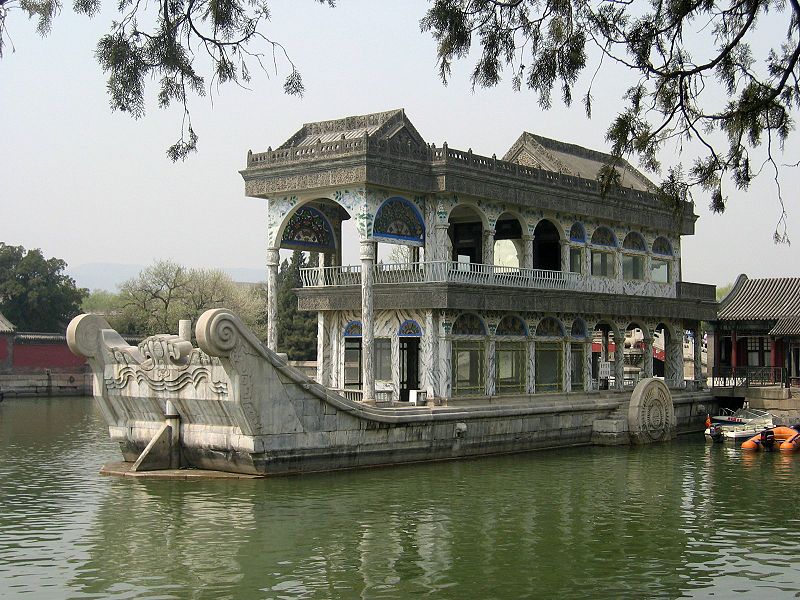