At precisely 6:35pm on a Thursday night, exactly as scheduled, the ChinaTrust Brother Elephants took the field at Taipei’s Xinzhuang Stadium, their bumblebee-yellow uniforms sharp against the deep green of the grass. Alone, with nearly an entire section of the outfield stands to myself, I leaned back in my seat and watched the first Uni-President 7-Eleven Lion step into the batter’s box. I had no idea who he was or how his season was going. I didn’t know who was pitching, or which team had the better record.

I didn’t care. I just wanted to watch a baseball game.

I live in Shanghai, which is far from a hardship post: the city has become overrun with Starbucks, import supermarkets, and Apple Stores. When people ask me what I miss the most from home, I really have nothing to say beyond, “My family and friends.” And baseball, I sometimes add. But I don’t miss baseball, exactly; after nearly a decade of moving between China and the U.S., I’ve simply grown accustomed to living without it for long stretches of time.

Baseball never caught on in mainland China. Back in the early twentieth century, boys at missionary-run colleges along the coast played the game, but it failed to make the leap to the larger population. Chairman Mao had no love for the sport and banned it, like golf, as “imperialist.” Today, young Chinese play basketball and soccer, and though the MLB has tried to make inroads in the country by opening a development facility in Wuxi, no one I’ve met in China has shown more than a passing awareness of baseball’s existence.

In Taiwan, however, baseball is a legacy of Japanese colonization, which stretched from 1895 to 1945. Though the Japanese initially tried to maintain baseball as “their” sport, as the British did with cricket in India, local Taiwanese soon took it up and continued playing long after the island’s colonizers had left (a story detailed in Colonial Project, National Game, by China sports historian Andrew Morris). They played it well: between 1969 and today, Taiwanese teams have won 20 Little League World Series titles, and the Taiwanese $500 bill shows a young team jumping for joy, hats thrown in the air.

Taiwan’s 25-year-old Chinese Professional Baseball League (CPBL) fields four teams that play in ten stadiums around the island, two of which are within greater Taipei and easily accessible via public transit. Those were my targets during my one-week stay in the capital last month.

I showed up at Xinzhuang Stadium, in the outlying New Taipei City, unsure of what to expect. I had heard that the CPBL has traveled a rocky road in recent years, beset by match-fixing scandals and falling attendance, and I wondered what this would mean. Empty stands and lackluster fans, like the worst Phillies games of my childhood? A level of play that would make the ’62 Mets look like all-stars? I bought a ticket for the wai ye, or outfield bleachers, for 150 Taiwan dollars—a conservative US$5 investment in the unknown.

The stands were mostly empty; I checked the CPBL website after the game and saw that paid attendance numbered only 2,451 people, filling perhaps one-fifth of the park’s seats. But the fans were anything but apathetic. Most of them carried a pair of hollow plastic bats, which they beat together in time with the rhythm of a massive drum being played behind the Brothers’ dugout. Each side had a man serving as a combined cheer captain and MC, who was responsible for leading the crowd in chants whenever his team was at the plate. With the constant screams of the MCs, the boom of the drum, and the thunder of the plastic bats, Xinzhuang Stadium felt full of life, despite the paltry crowd.

Taipei’s summer weather is notoriously hot, humid, and rainy, but that Thursday evening was surprisingly comfortable, with a refreshing breeze blowing out toward right field. I sipped the Taiwan Beer I’d bought at a 7-Eleven across the street—the bleachers are a self-catering zone—relaxed in my seat, and watched the play unfold.

Neither the Brothers nor the Lions bore any resemblance to the ’62 Mets, though they were both closer to a good American college team than a professional squad. The game got interesting in the third inning, when the Brothers scored three runs, to the delight of their vocal fans. Immediately to my left, a group of six 13- or 14-year-old boys passed a pair of binoculars from one set of hands to the next to get a better look at the action. Not all of that action was on the field. “La-la dui!” one boy screamed as the small Brothers cheerleading squad (or “rah-rah team”) climbed onto the top of the dugout to dance. All six boys grabbed for the binoculars.

Most of the other groups around me were families, as well as a few pairs of young mothers who chatted with each other as their kids climbed over and under the bleachers. Even with the MC shouting and the crowd banging their plastic bats and the drum booming across the diamond, the atmosphere was relaxed in the way that minor-league games in the U.S. can be. The sun set and the lights came on and the innings passed, one after the next, just as they always had.

I had no stake in the game, no personal allegiances to defend, and, at a distance, couldn’t even read the tiny Chinese characters marching across the backs of the players’ uniform shirts to figure out who was who. Both teams played a solid match, not entirely reflected by the final 9-1 Brothers victory, which looks more lopsided than it felt at the time. It was, I thought to myself with satisfaction, a perfect game.

As relaxed as Thursday night had been, Saturday afternoon’s game, at Taipei Tianmu Stadium, was intense. I bought a 350-dollar (US$11.67) nei ye, or infield ticket, for this match—Tianmu doesn’t have outfield bleachers—and the attendance was nearly double that of Thursday night. Sitting in the heart of the Brothers’ section along the third-base line, with the MC only yards away and a couple thousand screaming fans banging their plastic bats together in unison before the game even started, overwhelmed me. I moved from my assigned seat and found an empty row that I could have to myself a few sections over.

Snapping open the tab on a Taiwan Beer, I watched the Brothers spring out to a 1-0 lead in the first inning. The pitcher for the EDA Rhinos looked tired. I knew how he felt: the sun, the noise, the fans—even in my isolated seat, I was suddenly suffering from sensory overload. I longed for the relaxed vibe of Thursday night and realized that maybe I should have let that experience stand uncontested, a perfect game in an unexpected place. Trying for a second only two days later was bound to be a letdown.

For a moment, I considered something I had never voluntarily done before: leaving a baseball game early. I could go back to my hotel and watch it on TV, in air-conditioned comfort and surrounded by the solitude I suddenly craved. But as soon as the thought entered my mind, I chased it away. I would stick it out for five innings, I decided, and then if I still wanted to go, I would go. I had to give this a fair chance.

If the game hadn’t been so close, I might have left. But both teams were struggling, repeatedly getting into jams and then somehow worming their way out of them without giving up any runs to their opponent. The Rhinos didn’t tie the score until the bottom of the fifth inning, but the Brothers immediately pieced together a run in the top of the sixth to regain their lead at 2-1. By then, the sun was beginning to set and I had managed to tune out the MCs most of the time. I stayed.

The Rhinos scored twice in the bottom of the sixth, and that would turn out to be all they needed. One after another, the remaining innings passed, but nothing changed, despite the increasingly apoplectic urgings of the Brothers’ MC. Rhinos 3, Brothers 2.

I felt a little bad for the Brother Elephants; after two games, they had, in some small way, become “my” Taiwanese baseball team. But I was also detached enough that I didn’t really care. I filed out of the stadium and crowded onto a bus heading toward the closest subway station, jammed in with dozens of other baseball fans. I felt both mentally and physically exhausted, and I still had two subway rides to get back to my hotel; I knew it would be at least another hour before I could kick off my sandals and collapse into bed. But when I asked myself, Am I glad I stayed for the whole game?, the answer popped into my mind without a second thought. Absolutely. I had missed baseball—maybe not as much as I missed my family and friends, but far more than I’d realized. Shanghai’s import supermarkets and plentiful Starbucks are nice conveniences, but I’d happily trade a few of them for a baseball team to watch. 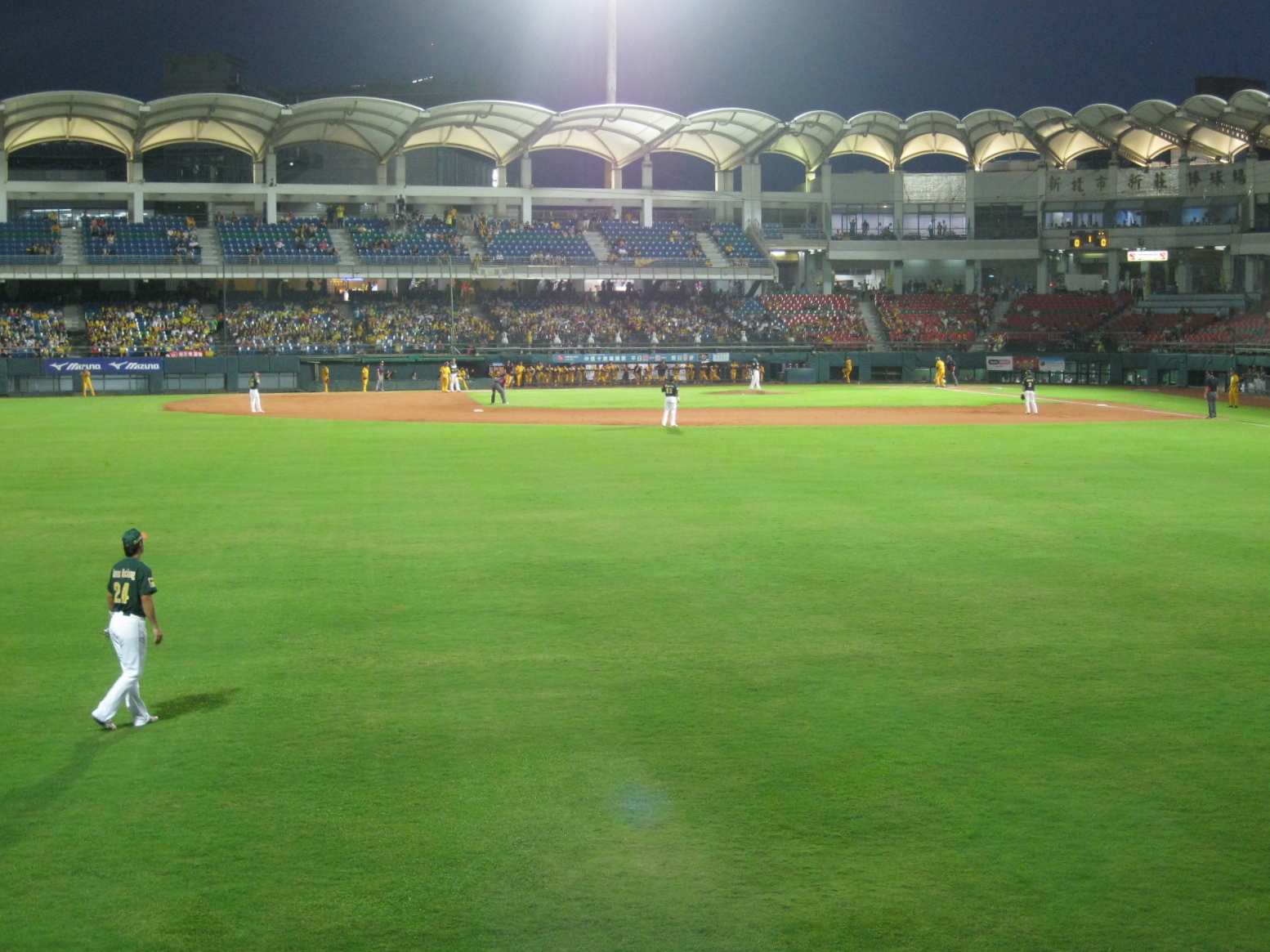