Moviegoers in China pull no punches skewering the big-budget, low-quality offerings that dominate at the country’s theaters. Famed director Zhang Yimou, known for socially critical films, “has already died,” according to the top review of his widely-panned epic The Great Wall on the popular site Douban. Nearly all of the most-liked user reviews are similarly unforgiving: “Zhang Yimou finally unloaded the burden of being an artist, glamorously turned around, and told his former self, ‘goodbye!’”

Online criticism of The Great Wall and two other high profile Chinese movies was so harsh that the state’s flagship media outlets accused malicious reviewers of deliberately panning domestic films. A People’s Daily report from December declared that negative reviews “seriously harm the Chinese movie environment for audiences and fans.” A few weeks later, the government body responsible for censoring China’s film industry announced the creation of a national film critics committee tasked with “changing the chaotic film reviewing situation in China” from the top down.

The claim that domestic films are unfairly and indiscriminately targeted for negative reviews would only be possible if there were no evidence to the contrary. Yet reviewers on Douban praised the (extremely) dark comedy Mr. Donkey (驴得水). Released in late 2016 and adapted from a play of the same name, Mr. Donkey scores an impressive 8.3 out of 10 rating on Douban, the highest rating for any movie last year. (The Great Wall clocks in at 5.0.) Reviewers were caught off guard. “You can’t even compare it with the average Chinese film” reads the top review of Mr. Donkey on Douban. Or, put more explicitly by another internet reviewer: “I heard something huge happened in Chinese cinema […] Even my college roommate, who will only watch Hollywood movies, went to the theaters [to watch Mr. Donkey].”

Set in a poor rural school in a northern desert region during the 1940s, Mr. Donkey tells the story of four teachers who decide to procure additional government funding by claiming a water-fetching donkey as a fifth teacher. When the education ministry inspector comes to check, the four real teachers cook up an elaborate ruse. A poorly-educated coppersmith who speaks a local dialect is shoved into the titular role, resulting in a series of increasingly twisted schemes to hold together the web of lies. The comedy gives way to a bleak portrait of individual and social failures, as the characters are forced to confront difficult and ultimately tragic, moral choices.

Many Chinese films are built around big-name celebrities or existing manga or video game storylines guaranteed to turn out an existing fan base. Mr. Donkey, however, is of a different breed. Written originally for the big screen, it was adapted for the stage due to a lack of funding; after a successful run, the play was then readapted for the screen, keeping many of the original actors rather than bringing in movie stars. The industry was skeptical of the unorthodox approach. “They told us that without any celebrities nobody would release the movie. It will be straight-to-DVD — people will have to enjoy it in their homes,” the writer and director told the Paper. Fearing substandard box office turnout, the studio delayed the movie’s original release date by a week to allow more time for promotion, hoping that positive reviews could make up for the lack of star power. It worked.

Mr. Donkey’s bouncy, tuba-infused score and its carnivalesque packaging give it the outward appearance of lighthearted farce. The movie’s comedic success, however, relies more on wordplay than sheer absurdity. The premise itself plays on a clever pun: The Chinese word for donkey (驴 lyu2) sounds similar to a common Chinese last name (吕 lyu3).* Mr. Donkey is really Mr. Lyu, which would be similar to pretending the local coppersmith is a teacher named Mr. Smith in an American schoolhouse. In the original Chinese, the bait-and-switch on which the plot is based is as much of a clever joke as a ridiculous premise.

The limited number of sounds in Chinese makes the language particularly suited for double meaning: multi-sound, multi-meaning words offer an expansive canvas for humorous twists and tweaks. At nearly each major turning point in the plot, embedded beneath the comic farce is a subtle and often clever linguistic twist.

After a first round of trickery appears to work, the education inspector offers the teachers a huge sum of money — but only on the condition that Mr. Donkey has his picture taken for a wealthy American benefactor who wants to support rural education in China. The coppersmith refuses: in his local village, photography is thought to result in premature death. The teachers plead with him to no avail until Zhang Yiman, a female teacher who refuses to conform to the era’s conservative norms, steps in. She says:

To say, “I’ll convince him” would be wo lai shuo fu ta; but she replaces half of the character for “convince” with its homonym “to sleep with” (shui), resulting in a new word that means “to convince by sleeping with him.” A few moments later, when one of the teachers asks where Zhang Yiman has gone, the other characters reuse the pun to note that she is busy “convincing” the coppersmith. The teacher who is in love with Zhang Yiman (and with whom she often trades double entendres) realizes his chances are over; he redirects his energies toward greed, setting off a chain reaction of conflicts that slowly unravel the school’s twisted schemes.

Another form of wordplay helps shape the film’s main antagonist, the stern-faced, value-amorphous education ministry inspector who reeks of corruption. When he arrives to verify the existence of the alleged fifth teacher, the fictional Mr. Donkey (played by the coppersmith) is called on to prove his fluency in English. The coppersmith delivers Hamlet’s “to be or not to be” soliloquy in its original form — or rather pretends to do so, while actually reciting the words to a song in his native dialect. Zhang Yiman acts as a “translator,” rendering the coppersmith’s faux soliloquy into standard Chinese. The supposed translation increasingly bears no relation to the length or tone of what is being said, making it comically obvious that the whole thing is a farce.

The inspector coldly offers his assessment of Mr. Donkey’s performance in the form of a chengyu, or four-character Chinese idiom: 原形毕露 (yuanxing bi lu), which means that someone has been exposed for who he really is. The teachers think the game is up and attempt to shoulder the blame. Instead, the inspector brushes them off to congratulate the brilliance of Mr. Donkey. Despite presenting himself as a noble representative of the educated, morally upright government, the inspector’s obvious misuse of chengyu — the dexterous use of which is a badge of the Chinese intelligentsia — expose him as a fraud. He bears no trace of the upstanding scholar-official that he claims to be.

As the ruse inevitably unravels, the movie’s playful wit disappears. Each character fails in turn to live up to his or her earlier idealism: benevolence turns to greed, innocence to corruption, and nobility to cowardice. Even the principal’s adolescent daughter, who refuses to be complicit in the lies of the adult world, is brought down by the moral failings of those around her.

It is a deeply pessimistic portrayal of Chinese society. Ostensibly set in 1942 in Nationalist-controlled China, its social commentary is relevant in 2016, under a different political system, in a different economic context and with different social mores. When the urbane teacher Pei Kuishan remarks, “Maybe it’s not the peasants who are the people most lacking in education in China,” referring to the supposed intellectuals like himself and his fellow teachers, his words are equally directed at the educated elite under the Nationalists of 1942 and the Communist Party in the present. Thinly veiled capitalism has brought many of China’s urban citizens unimaginable wealth and status; as the luster of new wealth has begun to wear off, it has also sparked social criticisms of moral bankruptcy, environmental degradation and spiritual emptiness. Rural society, long the economic caboose of post-reform China, is attracting increasing attention from dissatisfied urbanites for whatever is left of its unspoiled environment, slower pace of life and communal values. Represented here by the once-innocent coppersmith, it, too, succumbs to the corrupting influence of the urban elite.

But it is Mr. Donkey’s clever comedic foundations that allow for such a critical turn without being overbearing. The teachers’ fall from idealism to moral failure is sad, rather than mean-spirited; it is as much a social failure as an individual one. Zhang Yiman’s slow descent into insanity is tragic in part because of the comic wit — and willingness to wield that wit in defense of the school — that comes through in the early part of the film. She personifies the best of the school’s comedy-infused idealism, and is subsequently forced to bear the brunt of society’s failings when the lies collapse.

Mr. Donkey is unique by contemporary Chinese movie standards, yet it fits into a long comedic tradition in China. In its clever wordplay and sharp social commentary, Mr. Donkey resembles , a northern Chinese stage performance which features a pair of actors engaged in quick, witty, and often quite dirty banter. “The essence of xiangsheng is satire: at its core is satire, not singing praises,” argued performer Guo Baochang in 2014. Chinese comedy is often subversive, a fact not lost on the ruling Communist Party. Their wary and often hostile attitude towards domestically produced comedy has made it difficult to produce content that is both funny and critical, while also heightening the social need for such content.

Combined with film investment that favors conservative and familiar content, this left a gap that may explain some of Mr. Donkey’s appeal. “The Chinese audience, now savvier and more internationalized, craves something spontaneous and honest,” wrote linguist and observer of Chinese comedy David Moser in 2004 when assessing the moribund state of crosstalk. The same can be said of all Chinese satirical forms. Mr. Donkey’s reception suggests that for the next film that can strike a similar nerve, the swarm of online movie reviewers eagerly awaits.

* I have rendered this in pinyin as “lyu” not “lu” because that is how the English subtitled version of the movie does it.

Josh Freedman is a writer and researcher in Beijing. 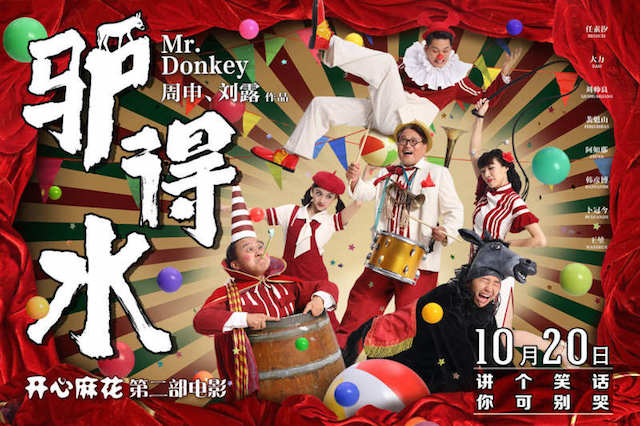