Journalists leaving long-term assignments in Beijing routinely get asked, “So, when are you going to write your China book?” It’s something of a joke, but not quite; experienced China journalists, after all, have generally seen and heard enough over the years to compose a compelling book-length analysis of the country’s economy, or society, or politics, or whatever other topic they choose. And many of those books, I should add, are among the best we have on China today.

But when longtime BBC Beijing correspondent Adam Brookes left the China beat and moved to Washington, DC, he wrote a different kind of China book: a spy novel. That was 2014’s gripping thriller Night Heron, which introduced readers to British journalist Philip Mangan. When Night Heron opens, Mangan is drifting along in a stable if not cushy life in Beijing. He needs a spark — something to jolt him out of the rut in which he has gotten stuck — and that spark comes in the form of Peanut, an escaped Chinese prisoner who seeks out Mangan and uses him as a conduit to British secret intelligence. The ensuing action blasts Mangan’s rut to smithereens; now his problem is not boredom or predictability, but flashbacks and guilt — plus the occasional wisp of longing for the spy life.

Spy Games, the second volume in what I believe will be a trilogy, finds Mangan in Ethiopia, trying his best to lie low and stay out of trouble. But when he’s approached by a Chinese man who calls himself “Rocky” and slips him classified documents, the temptation is irresistible, and Mangan dives back into the intelligence world. While in Night Heron Mangan unwillingly got drawn into the action, Spy Games sees him making the choice to get more deeply involved. Guided by his handler, soldier-turned-agent Trish Patterson, and her boss, Valentina Hopko, Mangan follows Rocky down the rabbit hole.

Rocky, however, isn’t simply handing over designs for a secret missile; the information that he has to offer holds much more explosive power. Rocky and his co-conspirators want nothing less than to bring down one of the most influential families in China, a clan whose web of power and corruption extends across China’s political, military, and corporate worlds. If successful, Rocky’s group could threaten the survival of the Chinese government itself.

And it’s here, in the end game that’s so much larger than Mangan imagines, that Brookes’s time in China turns Spy Games into his own version of a China book. Because I presume it’s his years reporting on Beijing politics that enable Brookes to give a depth and a history to the elite infighting that helps the story, for me, ring true. As any old China hand knows, there’s nothing straightforward about Zhongnanhai power struggles, and the events of forty years ago are just as important as what happened last week.

With its intricate plot, multiple locations, and large cast of characters (far more than those I’ve mentioned here), Spy Games requires a bit of focus to follow; I found myself wondering how in the world Brookes mapped everything out to ensure the disparate threads would join together in the end. But he does an excellent job of keeping the action moving and the tension high, making Spy Games a difficult book to put down. Here, again, is a way that Brookes has separated himself from the pack: I’ve read a lot of very good China books by excellent journalists, but I’ve never before stayed up far too late on a work night to finish one, unwilling to go to sleep until I knew how it ended. 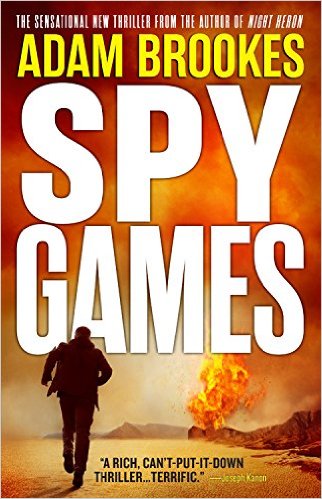