In October 2014 I travelled to Hong Kong for a friend’s wedding. I had booked my flight the year before, and went straight to St John’s Cathedral from the airport. But instead of taking a cab down Connaught Road, a central thoroughfare usually choked with traffic, I walked down the empty multi-lane expressway. Later, after dusk had fallen and vows had been made, I slipped out of the wedding reception in the Foreign Correspondent’s Club and returned with a couple of friends to the blocked-off stretch of motorway, where crowds had gathered in their tens of thousands, to march for democracy.

The Occupy Hong Kong protests, or Umbrella Movement — however you want to call it — shook the city for three months. Political activism had been a regular feature of life in Hong Kong for years, with annual June 4th vigils and a massive demonstration in 2003 against a proposed security law. But the 2014 protests, sparked by Beijing’s reneging on a promise to progress towards meaningful suffrage, were the first and largest of their kind to directly challenge Hong Kong’s overlords in the mainland, and to call for the resignation of their unpopular local leader (called the Chief Executive Officer) CY Leung.

There was a carnival atmosphere on the streets that first Saturday night of October. Makeshift stalls gave out free bottled water and biscuits, while banners hung from the overpasses: political slogans next to John Lennon quotes. One wall was covered with sticky pads featuring messages of support in colourful solidary. Together with the throng, we sang the Beyond song “Under a Vast Sky,” the unofficial anthem of the protests, while waving the flashlight function of our iPhones like lighters. “Forgive my longing for freedom,” the lyrics go, “as I fear to stumble someday. Anyone can give up dreams, as I am clinging to my own.”

Almost three years later, on July 1, I was back in town and observing another march – this time to mark the 20th anniversary of the handover of Hong Kong to China in 1997. Once again, Hong Kongers took to the streets to register their disaffection, walking from the green of Victoria Park to the grey of the government offices in Admiralty. Today was the change of the guard: the new CEO, Carrie Lam, had just been sworn in. But the signs now called for CY Leung to go to prison, and for some the target was higher still. One risky cardboard cut-out depicted Xi Jinping clutching a yellow umbrella, symbol of the 2014 movement.

Other demonstrations (and celebrations) dotted the city. Some were pro-Beijing: a gaggle of patriots carrying the PRC flag clashed with pro-democracy protesters holding signs commemorating Liu Xiaobo. One fringe group waved the Union Jack instead and blared “God Save the Queen” out of a boom box, calling for re-unification with the UK. And there was a sing-along here too, this time of “Do You Hear the People Sing?,” the famous Les Miserables tune, lyrics altered to reflect the mood: “The blood of the martyrs will water the meadows of Hong Kong!” We can only pray that the sentiment never proves true.

July 1 also marked 10 years after my first trip to Hong Kong, where in 2007 I witnessed the 10th handover anniversary fireworks — fired from ships anchored in the bay — and felt them vibrate the ground beneath me. What a difference a decade makes. Now the mood is more dejected and less celebratory, and the city is polarized as politics splits people apart and puts still more off from coming out in the first place. But fireworks still light up Hong Kong, and for those who did march, however futile their cause seems these days, they will continue to sing for democracy: longing for freedom, and clinging to their dream. 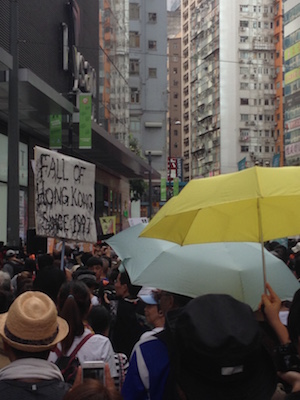