“I am disgusted! I’ll never go to a war between Orientals again. The vexations and delay are too great.”

He’d sailed his broken down sloop Razzle Dazzle as an oyster pirate; he’d crewed the sealing schooner Sophie Sutherland along the coast of Japan; he’d served with Kelly’s Army and tramped the western United States; he’d dropped out of UC Berkeley. He was just 19. He joined the Klondike Gold Rush; he became a socialist; in 1903, at just 27, he published The Call of the Wild and with it gained money and success (10,000 copies flew off the shelves the first week of publication). And then, in early 1904, the San Francisco Examiner asked Jack London if he’d like to go and report on a war between Asia’s rising power, Japan, and Europe’s largest, but crumbling, monarchy, Russia. Though the war was between the armies of Tsar Alexander and the Meiji Emperor, it was to be fought largely on Korean and Chinese soil. London, in the midst of a protracted divorce from a four-year marriage, thought “why not”? He embarked for Yokohama.

London’s time as a war correspondent in Asia has rather slipped from his popular biography. The “big books” (The Call of the Wild, White Fang, The Sea-Wolf, The Iron Heel), his leftist politics, the man’s-man adventurer persona — these are what have come to dominate.  The same goes for the conflagration he covered, the Russo-Japanese War of 1904-05.  It, too, has rather slipped from history. It shouldn’t have. Indeed it should be front-and-center right now as we commemorate the centenary of World War I and, in some parts of Asia, as a recent post to this blog emphasized, attention is also being paid to the 120th anniversary of the 1894-95 Sino-Japanese War.  We need to make room for the big event that fell halfway between the two.  This month marks the 110th anniversary of still another war — one that not only shook the solidity of Western right and might (the first time an Asiatic power defeated a European one) but offered a first taste to the Generals and politicians of Europe and America of what the more globally famous and infamous modern, mechanized wars to come would look like.

The Russo-Japanese War surely made it impossible for anyone to be seriously shocked by these classic elements of World War I: trench warfare stalemates; the deadly impact of modern artillery; aerial warfare (balloons and kites used to drop bombs); the futility of old guard cavalry against new hi-tech machine guns (Maxim Guns, the so-called “Devil’s Paintbrush” cut down swathes of soldiers); and the ferociousness of sea battles involving modern battle cruisers, torpedo boats and submarines (threatened, but never eventually deployed, by the Japanese Imperial Navy who, incidentally, had just taken delivery of their first subs from their suppliers — Electric Boat of America).

The Russo-Japanese War was also a precursor for World War I in terms of press coverage. Photography, newsreels, “embedded” reporters on both sides, wandering freelancers supplying “the wires” and telegraph services to send reports quickly down to Shanghai, east to New York, and west to London. For the first time, a war on the far side of the world was reported to Americans and Europeans with their morning pancakes or kippers.

Of course, for London it was all at first one big adventure. He was one of a group of American journalists who travelled together from San Francisco to Yokohama on the SS Siberia specifically to cover the war. They called themselves the “Vultures,” descending upon the mayhem, chaos and death of the conflict initially with a frathouse-like glee. The fun didn’t last long. London soon got himself in trouble. He hopped from Japan to Korea, where most of the fighting was occurring, and made his way to Pyongyang. His first reports for the Examiner covered the battles raging across the Korean peninsula and were sent scribbled on rice paper.  London had brought a camera and managed to smuggle out photographs from the Japanese front at Chemulpo, a major staging-post for Japanese ground forces in Korea.

The trouble — London was arrested and subjected to hours of rigorous interrogation by the Japanese, who suspected him of being a Russian spy. However, the drinking sessions on the Siberia en route to Japan turned out to be useful. Some of the other “Vultures” were connected. The urbane Richard Harding Davis called on his friend, Lloyd Griscom, the US minister to Japan, who managed to secure London’s release.

Back at large, London used his sailing skills to hire a boat and catch up with the Japanese First Army, by now advancing into Manchuria. Trouble followed him. London managed to get himself arrested again and was forced to enlist Harding Davis’s support to secure his release once more. He got to see the ferocious Battle of the Yalu (a Japanese victory but at the cost of over a thousand dead out of 40,000 combatants), but then, yet again, he got himself arrested by the Japanese, who finally decided enough was enough. Eventually the Japanese released him after the intervention of no less a personage than Teddy Roosevelt in the White House! But that was that —  and he was sent back to America.

London opted for a slightly less exciting life after returning. He bought a thousand-acre ranch in Glen Ellen, Sonoma County. He was now decidedly more anti-war than he had been before his “Vulturing” adventures in Asia. In his 1911 short story, War, he describes the anonymous battle for an unspecified piece of land and chooses not to dwell on the causes, or the righteousness of any cause, other than simply the waste that conflict brings.

Another of the “Vultures” who eventually returned from the Russo-Japanese War was New York Herald correspondent Charles Edward Russell, a muckraker who inspired Upton Sinclair. Russell summed up the effect on witnessing the Russo-Japanese War, the mechanized war that might have warned everyone just how bad the trenches of France and Belgium would be barely a decade later:

“I question much if any of the correspondents that followed the Russo-Japanese War are enthusiastic supporters of the theory that modern war has been humanised…I was in Japan just after the close of the war, and saw some of the remains of Japanese soldiers brought home for burial, an arm or a foot or a cap (being all that could be found after the shell exploded), and there was nothing about these spectacles that appealed much to one’s senses as remarkably humane.” 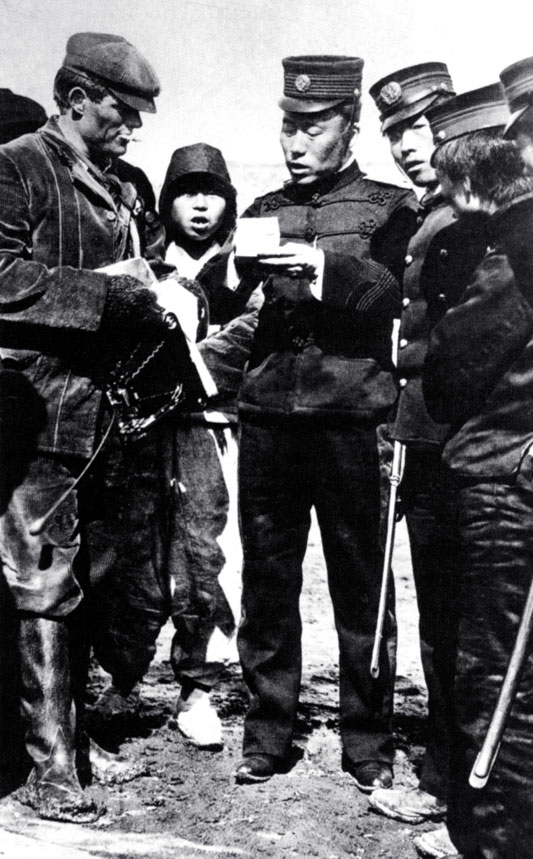