My landlady drops by unannounced at eight in the morning. It’s a bittersweet surprise. I’m familiar with the early-bird rap-tap on my door by now; the first thing I do before opening it is put on the kettle. Sometimes she comes to collect the rent. Sometimes wants to check if the heating came on, or to write down the electricity meter digits, or to switch off the water supply to the roof so the pipes don’t freeze in the cold, twiddling with hidden knobs under the kitchen sink.

This time, rap-tap-tap, she just wants to talk. She had ambushed my downstairs neighbor for rent while he was still in bed. He asked for an hour to shower and wait for the banks to open. So she came up one floor to pass the time at mine. Sixty-four-year-old Beijingers tend to assume that everyone begins their day as early as they do.

I live in a dazayuan, or “miscellaneous courtyard,” in the hutongs. The complex can hold up to 20 households inside a labyrinth of doors tucked away behind the street entrance. Mine is on the third and top floor of a compact new building, knocked up in the summer of 2012, just before I moved in. My landlady is squat, honest, with plump cheeks and a lopsided smile. She’s also relatively willing to talk about her life. — and I’m nosy by nature and profession.

I was having breakfast in my pajamas when she knocked. I threw on a ratty dressing gown for decency’s sake. She stubbed out her cigarette in the narrow stairwell and kicked off her sneakers before coming in. It wouldn’t do to get ash or dirt on her property.

The first thing that happens when my landlady visits is a short survey of what I’ve done with the place. A new shelf, a painting on the wall, different fish in the tank — any change is commented on with a taciturn “hao” (good) or “bu hao” (not good). No further explanation is offered, and her criteria for judgment are a mystery. This time she asked what the contraption behind the sofa was. I said it was a movie projector, and pointed at the blank wall opposite it. After a nerve-racking pause … “hao.”

To fill the silence as she waited on the couch, I take out some photos of my family back in Oxford. As usual, we talked about my romantic prospects. She’s keen to see me settle down with a nice Chinese girl, and reminds me with a hand on my shoulder that it’s good to marry early, “or else when you’re old who will you have to give your money to?” I ask after her one-year-old grandson, Chen Jiaming, to whom I gave an English name (Jamie).

We talked about Chinese youth, a topic I’m always interested in discussing with older generations. “They haven’t eaten bitterness,” she said, a familiar refrain. “They just think about eating, drinking, smoking, clothes.” The kids these days — if they weren’t kenlaozu (the “bite the old tribe,” living off their parents), they were yueguangzu, spending all their monthly wages. Here was my opening. A nudge, a prompt, and she started talking about her own youth.

Auntie Wang — as she likes me to call her — was born in the spring of 1949, and grew up with the People’s Republic of China, founded in the same year. Her family is from Jiangtai in northeast Beijing, an area now home to the fashionable 798 art district and overpriced Lido hotel. Back then it was mostly farmland; she helped her parents to plant and harvest wheat each year.

Auntie’s memories of those years are of hard times. Her family was poor, she said, and couldn’t afford enough wool for new clothes. She was pulled out of school during the famine of the Great Leap Forward and remains illiterate — something I first discovered when we went over my lease three years ago. When I asked further, she cut me off. “Let’s not talk about it.” After the famine at 17 years old, she joined the Red Guards and cut short her hair. When she was a girl it reached her waist. But she has never grown it out again.

I asked what she did as a Red Guard, and Auntie waved vaguely in the direction of the hutongs to the south. “We struggled against landlords.” They hung heavy wooden signs over the landlords’ necks, denouncing them as capitalists, and made them take the “airplane” position — body bent forwards at the waist like a crowbar, arms held stiff and straight behind the back, one hand clasping the other. Then: “da si tamen le.” We beat them to death, she said.

Her tone was casual. If she saw the shock in my eyes, she didn’t let on. To her it was just another memory, common for her generation, told to pass the time while waiting for the banks to open. In Chinese, the phrase she used could have simply been to add emphasis, or it could be literal. I didn’t say anything, or ask her to clarify which. She went on talking as if ambiguously admitting to murder was nothing to comment on.

Auntie remembered Zhou Enlai’s death in January 1976, and how everyone cried. She remembered Mao’s death too, nine months later. That wasn’t so sad — the people remembered how poor they had been under his rule, she said. The Cultural Revolution ended, and in 1978, at the age of 29, Auntie married. She had met her husband through a friend. He was 35, also from Beijing. The land I was living on was his, and when he died four years ago she inherited it from him.

Now she is old, and forgetting things. The changes have come fast in the last decades — health care is so expensive, she complains, and there are too many cars. In the evenings, she said, pointing apologetically to her head, she can’t remember what she did that day. But the distant past is still clear.

I made the obvious point. “The changes really are big, Auntie. Before you were struggling against landlords. And now you’re a landlady.”

The thought was alien, rejected with ease. Auntie Wang is a landlady, of course. I’ve seen her name on the property deed. But whenever I handed her a fat rent envelope, I also felt her faint unease at the situation, after a life of ingrained prejudices. To her, landlord is a class, not an income source.

I didn’t ask again about her time as a Red Guard. It was hard to bite my curiosity, but felt like too much of an intrusion. What if her phrase really was meant literally? Would I be able to look her in the eye? We chatted idly until my neighbor knocked on the door, cash in hand. Auntie put on her sneakers and went downstairs, telling me she would drop in again some other time, to show me little Jamie. I said I would be sure to be up early, in case.

China is full of stories like Auntie’s. They fade like old clothes, and everyone over 50 has one in the closet. I find it difficult to connect the horrors of the Cultural Revolution as we read about it in textbooks to the people around me. Whether they were victims or perpetrators can be hard to tell; the line between the two, I suspect, is blurred. I’m also fascinated by the collective amnesia which allows this society to put such recent crime behind it and move on.

But those crimes and their repercussions are still in living memory. Last month, an 80-year-old woman told me how she was sent to Sichuan for hard labor for 10 years, along with her three sons, all because her husband was from a “bad family background”: he has Qing dynasty officials in his bloodline. In China in Ten Words, Yu Hua describes how as a schoolboy he and his vigilante classmates ambushed a young peasant who was illicitly selling food coupons, pushed him to the ground, and hit him over the head with bricks until he was covered in blood.

Admitting this past is difficult — especially to a new generation that has no understanding of those times, let alone to a foreigner. Does Auntie’s daughter know what she did? Will Jamie? My distance from it all, in age and culture, means there’s little comment I can give. I don’t have the right to judge her generation without having lived in those times, and any disapproval I feel is muted, a dull banging behind heavy insulation. I still like Auntie, with her enigmatic “hao” or “bu hao” and her lopsided smile.

What I do feel is ever-deepening respect for those older Chinese who have publicly apologized for their actions during the Cultural Revolution. Like Chen Xiaolu, son of a high-ranking general, or Liu Boqin, a former Red Guard from Shandong. In a magazine article Liu named nine victims in particular he had wronged, and tracked down some of them to apologize in person. He’s the same age as Auntie. Here’s what he wrote:

“I want to apologize to all victims and their families to obtain psychological relief. An open letter is simple and clear. … I was naive, easily bamboozled, and never distinguished good from bad. … As I grow older, I have a more profound understanding of the sins of the Cultural Revolution. I cannot forget what I’ve done wrong.” 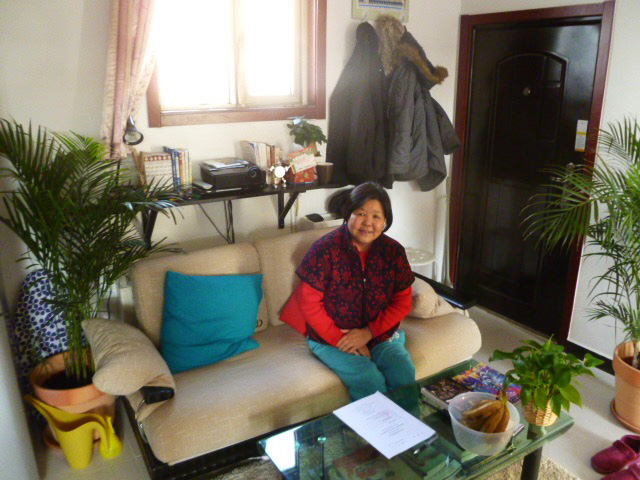