Wang Zhigang flew three hours just to see Mickey Mouse. In swimming shorts and a colourful umbrella-hat sold by peddlers outside the entrance to keep the sun off, he queued in 97 degrees heat for hours to get on the best rides. All because he made a promise to his son while Shanghai Disneyland was still under construction, that they would go when it opened. Wang Zhigang is a good father.

With his eight-year-old son, Xinbiao, he flew from Bazhong in Sichuan (just another anonymous Chinese city of three million) to Pudong international airport by the Pacific ocean. He took a plastic bag into the theme park. In it were two pots of instant noodles, a cylinder of chips, three bottles of water and a pack of what I can only describe as miscellanious meat jerky in shrink wrap. In his line of work as a travel agent, he explained, he has been to many of China’s tourist destinations, from the Sichuanese nature reserve Jiuzhaigou to mountainous Zhangjiajie in Hunan. “China has famous mountain and water scenery,” he told me – a stock phrase – then seemed to doubt his own pitch. “But it’s just mountains and water. Disneyland is more experimental.”

I asked what he meant. “It’s the meeting point of Chinese and Western culture.”

We were on a Pirates of the Caribbean themed ship at Treasure Cove. Over the lake rose the spires of Enchanted Storybook Castle. Other attractions included Tron Lightcycle Power Run, Buzz Lightyear Planet Rescue, Alice in Wonderland Maze and Marvel Universe. I saw the Western culture, I said. Where was the Chinese?

Families like the Wangs are why Disney chose the mainland as the location for its newest resort park in ten years (Hong Kong already has one). The $5.5 billion site has been under construction for five years, a joint venture between Disney and the Shanghai development group Shendi, and since it opened on June 16 an influx from all over the nation has proved it a smart investment. Zhigang paid 499RMB ($75) for his peak period entrance ticket – a significant sum, which is why he was stinting on the Mickey burgers by bringing his own food in. Then again, disposable income and a rising middle class is part of the magic.

There are Chinese characteristics to the park, but they feel token. A pagoda-roofed restaurant, the ‘Wandering Moon Teahouse’, serves Shanghai-style braised pork and ‘eight treasure’ steamed rice with duck inside a lotus leaf. At ‘Garden of the Twelve Friends’, the animals of the Chinese zodiac are reconfigured as Disney characters – Pluto for dog, Kaa for snake, Abu for monkey, Tigger for … you get the gist. Yet domestic tourists aren’t there for that; they’re pulled by the soft power of Disney and the rest of the world, which Chinese society embraces all the while that its leaders assert China’s uniqueness.

For a thirty year old, I had a wonderful time in Disneyland. Mickey and his friends were stoically cheery inside furry costumes in the blistering heat. The Tron ride was amazing. We picnicked in a grassy park in Fantasyland that everyone else seemed to assume was off-limits. The light show on the enchanted castle at nightfall was everything my inner preteen hoped for. Even a three-hour queue for a ride called ‘Soaring Over the Horizon’, where our feet dangled over smellovision vistas from the Taj Mahal to the Australian outback, somehow seemed an essential part of the experience.

When the four-minute ride finished with fireworks over the Shanghai skyline, and our toes touched the ground once more, I couldn’t help but feel underwhelmed. Then I turned to my right, where eleven-year-old Li Jiayi from Shandong province was in conniptions. Shanghai was the furthest from home she had ventured, and she was biting her fingers in shrill excitement at the thrill of it all.

“Xiasiwole!” she said. Shocked to death. “The world is so big!” 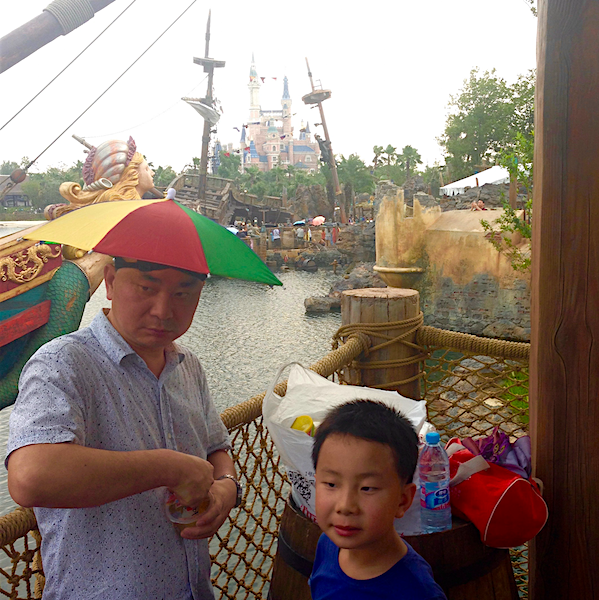