Beginning with its title, The Pivot: The Future of American Statecraft in Asia, Kurt Campbell’s latest book faces the challenge of signaling both continuity and change. In rightfully claiming partial credit for developing the Obama administration’s Asia policy and making the case for continuing on a similar path, he nonetheless subtly breaks from the White House, which calls the policy the “rebalance to the Asia-Pacific,” to advance the “Pivot to Asia” brand more closely associated with the State Department when he served in it under Secretary Hillary Clinton.

It is thus humorous to note that Campbell’s 2006 book (co-authored with Michael O’Hanlon) includes the following phrase: “U.S. foreign policy must rebalance its energies between the Middle East and East Asia” (emphasis mine).  Titled Hard Power: The New Politics of National Security, that work framed “China’s almost-certain rise to great-power status” as one of two “overriding national-security challenges” along with “violent Islamic fundamentalists.” In continuing to identify China as an important source of change, The Pivot shows continuity in thinking. To manage that change, Campbell and O’Hanlon’s chapter on China calls (on page 210) for the next president to “make sure that one of the top three U.S. foreign-policy officials is first and foremost an Asia hand.” President Obama did not take this advice, but it is hard not to speculate that Campbell hoped then and continues to hope today that he might one day be one of those three.

If Clinton becomes president, Campbell is indeed seen as likely to serve again as one of her top advisers—if not her top adviser—for Asia policy. Campbell first briefed Clinton in 1995 when she was first lady, before what would become a famous speech at the Global Women’s Congress in Beijing. He writes that in 2008 he had “been an early supporter of then senator Hillary Clinton, briefing her on many occasions and raising money for her campaigns. … I was a ‘bitter ender,’ staying with her until the very last of a disappointing fight … Many of my fellow policy wonks had instead carefully rebranded themselves as having been on Team Obama right from the start, leaving the remaining few of us feeling vulnerable” (page xvi). Thus when Clinton offered Campbell a position as the top U.S. diplomat for East Asia, a job to which he would bring deep experience working on the U.S. Asia policy from diverse perspectives in government, his hard work and loyalty seemed to pay off. Now, after leaving the State Department around the time Clinton did, Campbell reportedly co-chairs with Joseph Nye a group of Asia experts connected with the Clinton campaign.

It would be unfair to dismiss The Pivot as an extended job application, but it would be foolish not to read it in the context of what Campbell calls, in the good humor on display through much of the book, his “case of Potomac Fever.” The author’s possible political future significantly shapes the task of the book. Writing about contemporary policy always presents two challenges: how to represent the recent past without the benefit of a historian’s distance, and how to reason about the future under inescapable uncertainty. In The Pivot, Campbell faces both of these challenges, plus two more: how to write convincingly about past policy when one’s own legacy is on the line, and how to argue publicly about future policy while advising a presidential candidate.

While the book generally performs well under these diverse pressures, it has weaknesses that could divert readers before they reach the best material. Chapter two, devoted to a litany of facts and statistics about the “Asian Century” (a term apparently included in an earlier subtitle for The Pivot), provides little new insight for an internationally engaged readership and resorts to clichés about Asia’s “amazing ascent,” “dizzying development,” “teeming cities,” and “literally incomprehensible” scale. Chapter three is a scattered summary of the history of U.S. interactions with Asia that is heavy on pro-U.S. narratives and light on critical distance. Many readers can safely skip these 100 pages.

The balance of the 400-page book will be valuable to several audiences. General-interest international affairs readers are offered a summary of the Obama administration’s Asia policy and a well-situated moderate’s consensus view of a way forward. It is a must-read for specialists and future historians who will find significant insight into the thinking and political positioning of a high-level official. Those interested in a potential President Hillary Clinton foreign policy will also find that Campbell is writing under constraints Clinton would likely perceive when governing: It will not do to repudiate past policies as erroneous or insufficient, just as it will not do to argue 2009’s initiatives are equally well suited to 2017’s conditions.

Having centered the discussion around the Pivot, then, Campbell is obligated to praise one vision of the Pivot for its achievements so far, while at the same time declaring that a new vision of the Pivot is required today. Unsurprisingly, the rhetoric is at times a bit forced, but it is clear that Campbell is calling for substantial changes.

Better policy communication is a theme throughout the book. One of the most lucid chapters outlines ten elements of a forward-looking plan for the Pivot. The first element calls for “clear and authoritative declarations of U.S. Asia policy,” signaling U.S. government intentions and credibility not just to foreign governments but to U.S. citizens whose support will be required to back the investments proposed. This may not seem like a shift, but a January 2016 by the Center for Strategic and International Studies found “there remains no central U.S. government document that describes the rebalance strategy and its associated elements.” Campbell’s pitch for clarity is actually a pitch for achieving the original promise of the Pivot (or the rebalance)—a coherent Asia-Pacific policy that integrates U.S. government priorities and relations with allies, partners, and China. In this sense, Campbell argues that what’s needed is to bear down on the original Pivot—to more successfully rebalance attentions toward Asia.

Other original elements of the Pivot will require adjustment. In the book, Campbell calls the Trans-Pacific Partnership (TPP) “a cardinal priority and a cornerstone of the Pivot to Asia.” He confidently writes that “its ultimate passage will be a signature achievement of the Obama administration.” Yet in the context of the campaign, Clinton withdrew her support for TPP after it was negotiated, declaring, “I oppose it now, I’ll oppose it after the election, and I’ll oppose it as president.” Unless TPP is ratified before January 20, the Pivot strategy will need to be significantly rebalanced if the agreement’s economic and regulatory priorities are to be pursued.

Ultimately, however, the Pivot (both the concept and the book), comes down on the side of continuity over change. Campbell frames Asia as “being pulled between hegemony and a regional balance of power. Its operating system is drawn between twenty-first century and nineteenth-century rules of the road” (9). He argues that the Pivot will strengthen that “operating system, which rests on principles like freedom of navigation, free trade, regional transparency, and peaceful resolution of disputes” (345).

Campbell’s neologism of “Asia’s operating system”—recently extended in a speech by his successor at the State Department—is a cousin of what U.S. officials more dryly call “the rules-based international order.” The rules-based order itself is in part a kind of euphemism for the status quo.

Campbell clearly identifies China’s influence as a force that could disrupt something good—be it the operating system, a rules-based order, or a status quo in which the United States enjoys power and prestige. “An increasingly assertive China under the bold and powerful leadership of Xi Jinping,” he writes, “has posed an undeniable challenge to American regional leadership and prevailing international principles.” Campbell calls for policymakers to avoid the “China first” approach, which he writes “is based on the flawed assumption that getting the bilateral relationship right is the key to getting Asia policy right.” Instead, he advocates a China policy embedded in a regional framework to “bolster [Asia’s] operating system and set the contours for China’s rise.” Campbell is clear-eyed about the challenge as he sees it: “to preserve key national interests where necessary while sustaining a workable and sustainable relationship with China wherever possible” (213–2). What remains unanswered, however, is the extent of U.S. interests and when it is “necessary” to resist change—let alone how much power the U.S. government actually has to resist epochal shifts.

If Campbell has a detailed list of U.S. interests worth fighting for, versus those that are negotiable, he has understandably declined to reveal it. But if Clinton becomes president and her administration is inclined toward the type of continuity Campbell outlines in The Pivot, it will be these questions of priorities and capabilities that policymakers and the U.S. public will ultimately have to answer.

Taking the time to reckon with these fundamental questions will not be easy. Even since The Pivot was published in June, the situation has shifted significantly: a new Philippine president’s actions have unsettled U.S. relations with a key regional ally; uncertainty reigns regarding the region’s reactions to the Philippines’ broad victory over China in the South China Sea arbitration case; U.S.–China disagreement on North Korea has only cemented; and, just this month, the passing of the popular king of Thailand raises the possibility of further change for another U.S. ally.

With luck, Campbell’s plea for top officials and the public to prioritize getting Asia policy right will find its audience, and his detailed outlay of ideas will drive productive debate. Once the presidential transition period begins, however, the space for deep reflection will shrink as incoming officials face the minutia of emerging events and personnel puzzles. Now is therefore a rare opportunity to question what elements of continuity serve all the peoples of the Asia-Pacific and what forms of change should be embraced or opposed.

Graham Webster is a senior fellow for U.S.–China relations of the Paul Tsai China Center at Yale Law School and writes and publishes the U.S.–China Week news and analysis brief. 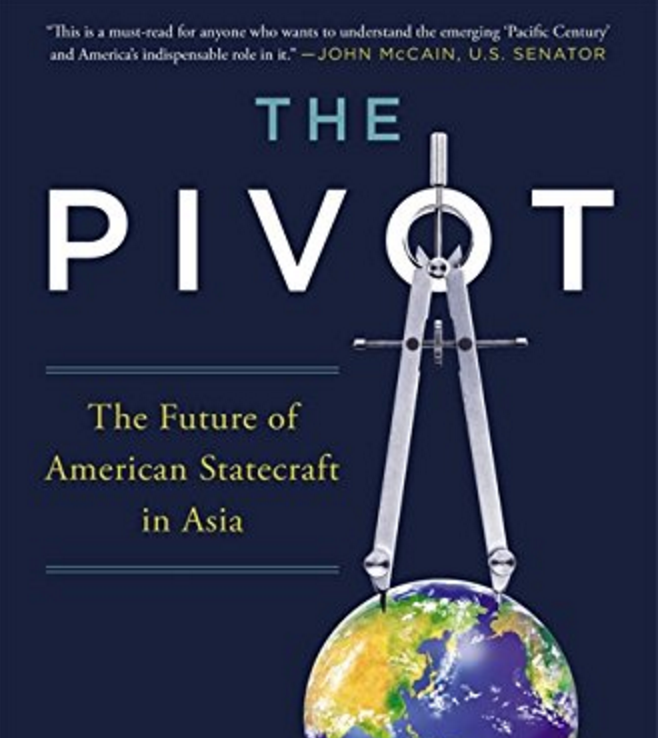