The 1971 “Ping-Pong Diplomacy” between China and the United States is often treated as a mere historical footnote, a quirky prelude to Richard Nixon’s path-breaking trip to the People’s Republic a year later. In his recently published book, Ping-Pong Diplomacy: The Secret History Behind the Game That Changed the World, journalist Nicholas Griffin, whom I saw speak about his book at Capital M’s literary festival in Beijing last month, seeks to redress that oversight. The result is an informative and entertaining book that covers far more ground than the single week of Ping-Pong Diplomacy itself.

Griffin begins with the history of table tennis (there were many early names for this small-ball sport, including “gossima” and “whiff-whaff”), a game that enjoyed a brief period of popularity in Edwardian England before dying out when the next fad came along. The man who almost single-handedly revived ping-pong, and turned it from an after-dinner game into a global sport, was Ivor Montagu, son of a prominent Jewish banking family that had climbed into the British aristocracy only two generations before. But Montagu, a character tailor-made for a cameo on Downton Abbey, had a rebellious streak that led him to communism. He also loved ping-pong, and ping-pong, curiously, would lead him to prominence within the communist world. Montagu relentlessly promoted the game, which he touted as the ideal activity for the masses, as equipment was inexpensive (and could be improvised) and a ping-pong table took up only a small amount of space (compared to the large fields necessary for sports like soccer and polo). He introduced table tennis to the Soviet Union in the mid-1920s and quickly saw the sport take off in countries around the globe.

Though the game had its adherents in China (American journalist Edgar Snow slept on a ping-pong table while making the visit to the communist base in Yan’an described in Red Star Over China), table tennis didn’t become identified with Chinese dominance until the 1950s. The new communist government wanted to find sports that Chinese athletes could win to prove their nation’s strength, and elite ping-pong status seemed within reach — if China could topple Japan from the top spot it occupied. It took less than a decade for the New China to assert itself as a ping-pong powerhouse. In 1959, the PRC won its first gold medal in any sport with a victory at the World Table Tennis Championship. Two years later, in the midst of the calamitous Great Leap Forward Famine, Beijing hosted the World Championships, where the Chinese beat the Japanese team to take the men’s cup, while the Chinese government managed to keep visiting teams from realizing that mass starvation was the order of the day in many parts of the country.

Ping-pong fell out of favor during the early years of the Cultural Revolution decade (1966 – 1976); the Chinese team’s victories were now derided as “trophyism,” and its travels around the world regarded not as soft-power diplomacy but rather dangerous exposure to foreign thoughts and practices. But when Mao and Zhou Enlai decided to find a subtle way to approach the United States and begin the process of mending relations in 1971, they chose ping-pong. The PRC sent a team to the World Championships in Nagoya, Japan, where Chinese players followed what seems to have been a carefully prepared script on making overtures to the Americans. Glenn Cowan, a colorful Californian who was far better at self-promotion than ping-pong, allegedly boarded the Chinese team’s bus by mistake (he claimed he was waved onto the bus by one of the players), and then struck up a conversation with Zhuang Zedong, China’s ping-pong star. Zhuang just happened to have a gift to present to Cowan — not the standard Mao pin that other foreigners received, but a silk-screened portrait of Huangshan, one of China’s most famous mountains. The next day, Cowan approached Zhuang and gifted him with a t-shirt printed with a peace sign, American flag, and the words “Let It Be.” The lines of communication thus opened, Mao sent a message to the head of the Chinese delegation and ordered him to invite the Americans to China — on a trip that would begin in only 36 hours.

The State Department scrambled to figure out what, exactly, was happening. Richard Nixon and Henry Kissinger had in fact been secretly working on establishing contact with the PRC, and they were eager to see the trip go forward, though not officially endorsed by the U.S. government. (The American ping-pong team was less a squad of national champions than a rag-tag group of above-average players who had managed to self-fund their journey to Nagoya.) Finally, a U.S. Embassy official in Japan informed the American manager that the U.S. government was “open to athletic exchanges” with the PRC and would not consider it against policy if the team made the trip.

A remarkable week followed, as the American team toured Beijing and Shanghai while pursued by crowds of curious Chinese and a few excited foreign reporters. Although the Chinese press downplayed the trip, treating the Americans as one more visiting athletic delegation, the rest of the world was watching. The Chinese team played carefully, winning some matches and losing others, always keeping the score close. Glenn Cowan was the star of the show, envisioning the pile of endorsement deals he anticipated would be waiting for him upon his return to the U.S. (Sadly, the ping-pong excitement that the trip sparked soon faded, and Cowan was diagnosed with mental illness not long after; he died in 2004.) Watching from Washington, Nixon and Kissinger saw the possibilities that the trip had opened. Only months later, Kissinger embarked on a secret mission to Beijing, where he arranged Nixon’s February 1972 trip, described in Margaret Macmillan’s Nixon and Mao: The Week that Changed the World.*

It’s probably no coincidence that Griffin’s and Macmillan’s books share similar subtitles. Both Ping-Pong Diplomacy and Nixon’s China trip did change the world, jointly helping to reestablish U.S.-China relations and ending two decades of deeply entrenched hostilities. But while Nixon has gotten all the glory for opening up China, Griffin shows that the Chinese were controlling the game all along. In both ping-pong and diplomacy, the Americans were woefully outmatched.

* For more on ping-pong diplomacy and the Nixon-Mao meetings, see the website of the National Committee on United States-China Relations (NCUSCR), an organization that played a crucial role in the diplomatic breakthroughs of the early 1970s. Particularly interesting are the photos and videos of the second round of Ping-Pong Diplomacy—the visit to the U.S. by Chinese table tennis players in 1972 that the NCUSCR coordinated. 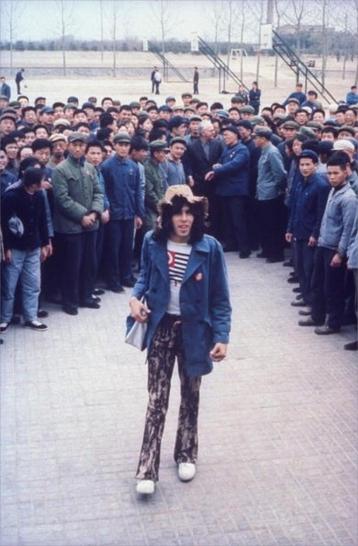