Walk down the street in Beijing and you’ll encounter a certain type of character: buzz cut, paunchy stomach, probably tattooed, likely taking drags from a cigarette as he barks into a cell phone. He’s probably also sporting a bracelet or necklace (or both) made of walnut shells strung together. This guy might be a gangster; more likely he’s plain old Chinese nouveau riche.

The walnut jewelry links him back to beliefs and practices from imperial China, though he might not realize the extent of this cultural inheritance. He probably selected these accessories simply to demonstrate that he can afford them. This guy and his peers have made walnut-shell jewelry and other products hot commodities—creating the Great Chinese Walnut Bubble. Like so many other bubbles before it, the bubble has now popped.

The price of walnuts in China exploded between 2008 and 2013, driven by demand not for the edible meat, but the outer shell. Big, symmetrical, colorful shells became prized items. As one farmer remarked at the height of the craze, a pair or shells could be more “more expensive than gold, in terms of weight.”

There’s a lot you can do with walnut shells besides crush them to get at the meat inside. Some people twirl two of them across the palm of their hand, often while walking; others wear walnut bracelets or necklaces that have been carved with intricate designs of Daoist figures or natural scenes. As one walnut carver explained, his designs focus on “longevity, safety, reunion, faithful love, health, and wealth.” But some prefer to forego any carvings and leave the shells as is because “no craftsman can create anything as beautiful as these natural patterns.” With so much money at stake, the aesthetics of walnut design is a serious topic.

There are numerous ways to get involved in the market. You can buy the end products, you can get into the wholesale business or, most speculative or all, you can buy the rights to future walnut shells while they’re still hanging from the tree and covered in green skin. You could end up with prize shells or with duds—the nut business is a risky one.

As with any bubble, there were historic, cultural, and economic reasons behind the sky-rocketing walnut prices.

Chinese emperors and officials rotated pairs of them in their hands to promote circulation. Walnuts became a gift traded among the Chinese elite, part status symbol and part health remedy. As one walnut farmer remarked, “Mainly the walnuts are good for the body, that’s why people play with them.” In fact, the very act of twirling the walnut shells will, over time, give them a red, glossy polish, making them even more valuable, or so the thinking goes.

And let’s not forget our friend from Beijing with his walnut jewelry. He represents the segment of the population for whom this cultural inheritance became cool, As one article from the height of the bubble observed, buying, wearing, and speculating in walnut shells was “especially popular among the newly wealthy and gangsters profiting from Beijing’s grey economy.” The walnut craze also had a gendered aspect; though it’s impossible to cite statistics, it seemed to be primarily a male pastime.

At the level of individual decision-making, the walnut bubble reflected a shortage of assets to invest in. The Chinese stock market is a mess, rates on bank deposits are abysmal, and average citizens are only allowed to move a certain amount of money out of the country each year. As a result, a lot of investment goes into housing. But if you already have an apartment (or three) and you want to put your money to work in some way, then walnuts (as well as tea, garlic, and jade) might start to look quite appealing. If you think wearing walnut-shell necklaces looks cool and prices are likely to rise, then, well, all the better.

But the good days are likely over for walnut speculators. As a number of Chinese media outlets have recently reported, the walnut market is not the same as it once was. Walnut shells themselves are quite fragile—easily scratched, broken, or damaged—and so is the walnut market.

One of the traditional homes of walnut carving is in Zhoushancun, near Suzhou, on the east coast of China. It has been epicenter of change in the walnut market during the past few years. As prices rose, people flooded into the business: stay-at-home moms and former fruit vendors learned how to carve walnuts; teenagers entered the trade; famous walnut carvers swamped with orders farmed out production; walnut bracelets and necklaces designed using computer programs emerged.

In 2014, the Chinese walnut crop was 35% higher than normal. Supply went up. Quality, or perceived quality, went down—and so did prices and sales volume.

At the height of the walnut craze, growers and vendors didn’t even have to bring their goods to market. The market came to them, with waves of cars from urban areas descending on the countryside. That’s no longer the case.

At the retail level, a store that grossed 2-3 million yuan in monthly sales in 2012 or 2013 is now doing a small fraction of that. One shop owner told a television reporter that she now has to call up former customers to see if they’re interested in the most recent arrivals. In 2013, she wouldn’t have had to chase customers for their business.

With sales down, the retailer is naturally pickier about what types of walnut shells she displays. On her rounds to various walnut carvers, she rejects a number of samples as too poorly designed. This change filters down through the walnut industry. One walnut carver (a former fruit vendor) noted that she’s trying to renegotiate her rent payments on her small carving studio and store. Carvers, in turn, are more demanding about the types of walnut shells they procure for wholesale merchants—not just any pair will do.

The nut business, clearly, isn’t what it’s cracked up to be. 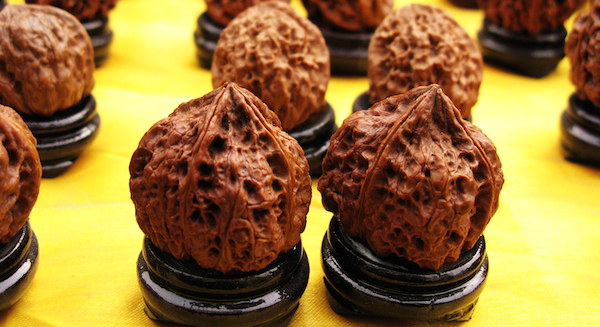