Eileen Chang’s fiction mirrored her life. Shanghai comes alive in her pages, from the political turmoil in the 1930s and 40s to the nightlife and fashion of the times. But Chang — a.k.a. Zhang Ailing — is best known for her love stories beset by family interference, betrayal, and melancholy reunions. Born and raised in Shanghai, Chang was unusual in that she wrote in both English and Chinese, often translating her own work. She also translated other authors’ books, including Han Bangqing’s massive tome, The Sing-Song Girls of Shanghai. This book and another classic, Dream of the Red Chamber, shaped her writing. But her life experiences in love and disappointment influenced her work more than anything.

It’s surprising that the book that has most often been adapted to film, television, and the stage in China, Hong Kong, and Taiwan, Half a Lifelong Romance, has only recently been translated into English. This translation, the work of Karen S. Kingsbury, was published last year in the United Kingdom and came out just last week in the United States. Chang originally wrote it as a Chinese serial in 1950 titled Eighteen Springs, later turning it into a single volume and, after many revisions, publishing it in 1968 with the title, Half a Lifelong Romance.

The story follows the early adult years of Gu Manzhen, a young typist at a Shanghai factory who becomes friendly with male colleagues Shen Shijun and Hsu Shuhui. After several months, Manzhen and Shijun start dating, but she isn’t ready to marry quite yet. Because Manzhen’s father left her mother a widow with a handful of children, Manzhen fears Shijun would be in over his head if he took on the Gu family’s expenses while Manzhen’s brothers were still young. Shijun is a junior engineer at the factory and doesn’t earn a comfortable salary yet. But they are both happy with their relationship and are willing to marry a few years down the line, after Manzhen’s brothers complete their studies.

In true Eileen Chang fashion, Manzhen and Shijun’s relationship breaks apart due to family interference and misunderstandings. After Manzhen’s father passed away, her older sister, Manlu, broke off her engagement to a doctor and went to work as a taxi-dancer to earn money for her siblings’ education, including Manzhen’s. Saving Manzhen from a life in the red-light district, Manlu is willing to make these sacrifices for her family but is also resentful of the hardships she faced when she broke off her engagement to be with strange men. Although Manlu eventually marries an ill-mannered but wealthy man named Zhu Hongtsai, her past doesn’t sit well with Shijun. He insists that Manzhen’s family move away from Shanghai before his relatives learn about her sordid family history.

Chang’s female protagonists are typically independent women who still care about upholding their family’s honor even as they place importance on studying, working, and earning their own money. When Shijun makes this demand on Manzhen, she replies, “If you want to talk about immorality, I don’t know who’s more immoral: prostitutes, or the men who are their clients!” This argument drives a wedge between the pair, but what happens next will alter their relationship forever: Manzhen is brutally betrayed by her family and 14 years pass before she sees Shijun again.

This is where Half a Lifelong Romance resembles Chang’s other work. For a year, Manzhen is locked away in the home of her sister, Manlu, and brother-in-law, Hongtsai. When Chang was a teenager, her father and stepmother held her captive in their attic for half a year. She writes an autobiographical character in her novel, The Fall of the Pagoda, who is also imprisoned by her father and stepmother. In real life Chang escaped with the help of a maid; in Half a Lifelong Romance, Manzhen escapes her sister and brother-in-law’s wrath after befriending a kind woman she meets during a brief hospital stay.

Manzhen’s unexpected reunion with Shijun is not unlike the main characters in Chang’s novella Red Rose, White Rose, who bump into each other on a Shanghai tram many years after the end of their affair. In Shijun and Manzhen’s case, he married someone else less than a year after he last saw Manzhen. At the time the two reunite fourteen years later, Manzhen has been married and divorced. As with many of her other novels, Chang makes sure both the men and women in these doomed relationships feel the effects of their loss when they meet up again after many years. This is certainly the case for Manzhen and Shijun when they bump into each other years later. “He felt a prickling in his eyes as the tears came, and his throat was full. He stared hard at her. Her lips were trembling.”

In earlier versions of Half a Lifelong Romance, the characters move north during the Chinese Civil War in the last half of the 1940s and end up with their original partners. But in the final 1968 version, which is what Kingsbury translated into English, Chang pared the story back to end in 1945, before the start of the Civil War, so that it would be free from politics other than a short passage about the war with Japan. This translation doesn’t end on a high note, but that’s trademark Eileen Chang.

An interesting note about the translation: the Chinese Romanization is a combination of Wade-Giles and pinyin. Kingsbury explains that she used both styles to make the pronunciation as easy as possible for the reader. So ‘c’ and ‘x’ in pinyin are ‘ts’ and ‘sh’ in this translation and give us names like Tsuizhi and Hongtsai. That doesn’t explain why most cities are written in pinyin except for Nanking.

In recent interviews, Kingsbury has suggested that Half a Lifelong Romance took this long to be translated because English readers weren’t ready for it until recent times, most likely due to Ang Lee’s film adaptation of Chang’s Lust, Caution. Chang herself was not satisfied with her reception in the west. She left China for Hong Kong in the early 1950s and settled in the United States in 1955. A decade earlier, she was married briefly to a Chinese editor fourteen years her senior, who was a Japanese sympathizer and passed away in Tokyo decades after their divorce. In the United States, Chang met American screenwriter Ferdinand Reyher. They were married for eleven years until his death in 1967. During Chang’s four decades in the United States, she was never happy with the sales of her English novels. This could be why she didn’t translate Half a Lifelong Romance when she had the chance.

Chang, like many of her female protagonists, ended up alone in her middle adulthood and beyond. With no children or family members apart from her brother, she lived a secluded life in Los Angeles toward the end of her life. In 1995, Chang’s landlord found her dead in her apartment at the age of 74. It was determined that she had passed away several days earlier from cardiovascular disease. When she died, her neighbors in Los Angeles had no idea she was a celebrated author.

Susan Blumberg-Kason is the author of Good Chinese Wife: A Love Affair With China Gone Wrong (Sourcebooks, 2014) and received an MPhil in Government and Public Administration from the Chinese University of Hong Kong a year before the Handover. She is now based in Chicago and can be found online at www.susanbkason.com and on Twitter at @Susan_BK. 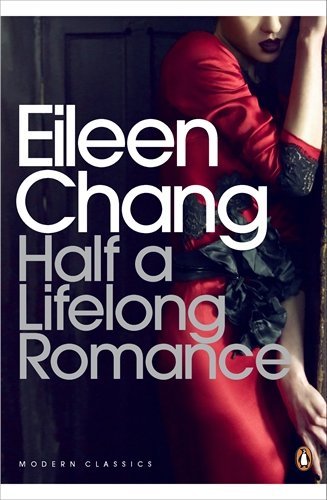