Fauna (a web name) is the founder and editor of chinaSMACK, a website that translates popular and trending Chinese digital content and online comment threads into English. It’s been around for over five years, and has hundreds of thousands of monthly visitors. The content is taken from a range of Chinese websites, discussion forums, and social networks, and ranges from serious social stories (Dongguan Anti-Prostitution Campaign) to the downright silly (Girl’s Rabbit Facial Expressions Amuse Chinese Microbloggers). As such, it’s a valuable window into what Chinese Internet users or “netizens” think. Often, what interests them is plain puerile – but that in itself is a useful reminder that most netizens are after distraction more than sedition, and their attitudes can also offer insight into hot button social issues that higher-minded analysis often misses.

When did you start chinaSMACK? I know you prefer to remain anonymous, but can you say anything more about yourself and why you chose to do this work?

My first post was July 9th, 2008. I had the idea a few months before and a friend helped me choose the name. To begin with, chinaSMACK was a personal project to practice my English. I used the Internet a lot and there were a lot of funny or interesting things on it that I wanted to share with friends, including foreign friends. I used Chinese discussion forums (BBS) for a long time. Now they are not so popular because of Weibo [the microblogging service] and Weixin [the social messaging app], but when I first started chinaSMACK they were very big. You could learn a lot of news and information from other netizens, and the comments were often very funny.

I’m surprised chinaSMACK has become so popular. Along the way, I have met a lot of people and made new friends who share my interests. Many of them have also contributed to chinaSMACK, and I think today chinaSMACK represents the interests of more people than just me.

What have you learned from translating comments from Chinese netizens on news stories? Was there anything about their attitudes that surprised you?

What I usually learn is just new information, but information on the Internet is also unreliable. So I think what is most interesting is just the different reactions from different people, especially if they are unexpected or creative. But after a lot of time, there is nothing very surprising anymore. I am more surprised by the comments and attitudes of chinaSMACK netizens than those on Chinese sites.

What do you think blogs like chinaSMACK can help people understand about China and its society that conventional Western journalism can’t?

For example, if I read a CNN article about something, what I learn will be different from what I learn if I read the comments about that same thing on Reddit. I can understand the same thing in different ways. Should I learn more about America from its news or from its TV shows? Should I learn about America from its journalists or from its netizens? I think that these different ways of learning things will all present a richer and maybe more accurate picture of a country and society. BBS was popular in China because Chinese netizens could learn from each other and not just from CCTV or People’s Daily. It is not always accurate, but it is still part of our life.

Do you think there are preconceived notions or biases about China in the Western media? What are they, and have they changed in the last five years?

Of course, and the same is true in Chinese media also. Media is people and people are this way, so media must be this way. If people are not perfect then media will not be perfect. I do not read or watch Western media very much, so I don’t know if my feelings about notions or biases are accurate. I am afraid that my feelings are too much influenced by Western netizens commenting on chinaSMACK, but I also know that they are not representative of all Western media. If Chinese netizens do not represent Chinese media, how can Western netizens on chinaSMACK represent Western media? Can one CNN or Daily Mail article represent Western media?

The change is that there is more attention about China, both good and bad attention. But if there is more attention, then there will be more information, and people and the media will become more familiar with China. If Western media pays more attention to China, maybe their first reports will have preconceived notions or biases but after more time they will become more accurate and fair. That is my hope. I know Chinese views about the West which are not very accurate, and I think Western views about China are often not very accurate also.

Some of the stories you run are about spoiled youths, the so-called second generation rich (fuerdai) behaving badly, or showing off their wealth. A lot of the netizen comments below are very angry. Is this the general attitude towards them?

Nobody likes arrogant people who show off.

Other netizen comments on stories about Japan or the US are very nationalistic. What’s your impression of the “angry young men” (fenqing) who write them? Are they really die-hard nationalists, or just ordinary young people venting their anger?

Fenqing is also used to describe netizens who criticize the Chinese government. It is just “angry young people”, and there are real people like that. But many are wumao [the “50 cent-ers”, who are allegedly paid to post pro-party comments on news stories]. There are more wumao than foreign netizens think, but less than Chinese netizens think. After reading so many of this type of article and comment, it is easy to know when they are real or fake.

How do you react to the stereotype that young Chinese are materialistic and selfish?

But do you think that, broadly speaking, young Chinese genuinely care about their society and politics, or only about themselves?

There are idealistic people, there are bored people, and there are indifferent people. I think most people care about their own life most of all, but will say this is bad or this is good when they see the news about a social or political problem. Maybe Western young people are more active in politics because their government provides them with more opportunities to do political things. In China, like any society, I think most young people want their society to become better.

The celebrity blogger Han Han, who is also known for his novels and career as a racecar driver, has said in interviews that just because netizens seem angry about national issues, it doesn’t mean they would actually do anything about it. Do you agree?

Finally, are netizens representative? Do you think that the kind of people who comment on the posts that China Smack translates represent their generation’s opinions?

Chinese netizens and their comments do not represent everything but they do represent something. Most people do not comment, they only read. The comments only represent the commenters (unless they are fake comments). I think the opinions of commenters are often shared by many non-commenters, but there is already a difference between someone who will share their opinion and someone who has an opinion but does not share it. Internet opinion represents and influences public opinion. This is important, but it is not perfect. 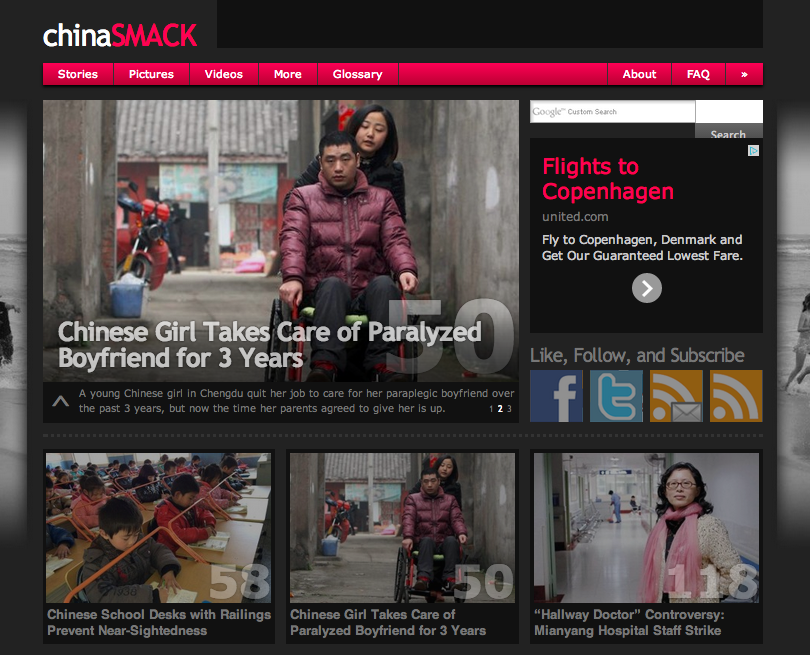