Xia’er, a 22-year-old music graduate from Hunan Province, is short, with a boyish complexion and no steady job. He is an average catch.

Cirl, professional Pick Up Artist, has a ripped body, the confidence of a god, wears sparkling jewelry, and does magic. He is a ladykiller.

Cirl exists in Xia’er’s mind, also known as Studtown. If you let Xia’er keep talking, you might make the same mistake of thinking he is Cirl. If you let him do his magic tricks on you, and have two X chromosomes, watch out, you’ll be another notch on his wall the next morning. If you’re a guy, it’s OK. He will teach you.

I was recently one of the privileged few to part with 50 yuan ($8.14) and go to a “sharing session” of Cirl’s pick up wisdom, as part of my research into Chinese youth subcultures. PUACirl, as the group is called, advertised on Bad Boys website (“techniques for chasing girls and dating”), which has 38,823 followers on the social media site Weibo. They hold events in cities across China, from talks to a fortnightly outing to MIX club in Beijing (450 yuan [$73.23] for expert wingmen).

The theme of this session was “Male God plan development,” and it was a taster for a three-month course that will set you back 4,800 yuan ($781.10). It was in a private room at a Coffee Bene café in central Beijing, with glass walls, a tray of Americano cups, and a projector. Fourteen future Male Gods — ranging from chubby graduates thumbing Buddhist prayer beads to men in their late thirties with a look of faint desperation in their eyes — assembled at 2pm to wait for their sensei to arrive.

After everyone introduced themselves (“My name’s Starr. I’m 22 and I just got into Cornell. I’ve been doing this for three years and the results are very good”), the first powerpoint presentation was from Chen Guang, a soft-spoken charmer in a buttoned-up top that made him look like a kung fu master. “The characters for my name mean bright sunlight in the morning,” he started. “Do you know why? People say it’s because my smile is like that.”

“Do you use that line with the ladies?” I asked.

Chen Guang shared with us the key places to pick up girls: On the street, in nightclubs, in SNS (Social Networking Systems, i.e. apps), and through your own social network. He then graded those four according to difficulty (of making a pick up), quality (of the target), follow-up likelihood, and efficiency. (“On the street, you can talk to maybe ten girls in a day. On your phone, you can talk to one hundred in a day.”) Drawing on your existing social group is low difficulty but “uncertain” quality. Street pick-ups are high difficulty and low efficiency. Geo-location apps such as Momo (think Grindr for straight people) are, unsurprisingly, “the quickest way to make new friends.”

Other invaluable advice included going to student clubs, where “the difficulty is lower.” The student district of Wudaokao, it transpires, was the “early development zone of [Chinese] pick up artists.” I even got some tailored advice as a foreigner: “You are most suitable to pick up girls in a café. You can go up to them and ask how this Chinese character is read.”

During Chen Guang’s talk, I had seen through the glass walls of the meeting room a smartly-dressed, nervous looking guy with slicked-back hair hanging back on a sofa and looking in at us. After halftime, he got up, walked over to us, burst open our door, and peacocked to the front. His hair gleamed, his shoes clinked. His white shirt was so crisp you could feel the iron’s edge, and was tucked into tight-fitting trousers behind a large Dolce and Gabbana belt. Accessories: a snazzy tie, rings on his fingers, two earrings in his left ear, and an oversized watch.

Without saying a word, this mystery man reached into his back pocket, took out a paper napkin and lighter, and lit the napkin. As the flame flared, his hands moved in a swirl and out of the ashes — a lollipop! He bent down and gave it to the only female in the group.

Our education had begun.

First, Cirl showed us a couple of videos. They all involved slick young Chinese men wearing eyeliner picking up absurdly attractive girls. In one routine, subtitles flashed on screen with the requisite jargon (“opener,” “negative,” “stock-spill”). Another strategy was more unique — pretend to be drunk and incapable so that passing hotties will take pity on you and help you get home, when, bam!, you make your move. And, of course, there was a montage. In it, a nerd sheds his glasses, dyes his hair blond, trims a pencil mustache over his upper lip, miraculously materializes abs, and applies that all-important eyeliner, to transform himself into a clubbing legend.

As well as the audio-visuals, Cirl also condescended to give us a few tips, even though we hadn’t paid 4,800 for the full course. Approach a lady from an angle, not directly. Find an excuse to touch her, such as brushing some dirt off her clothes. Don’t ask boring questions (“What do you do? How old are you? Where is your hukou [residence permit] from?”). Instead, tell an interesting story based on the context. If you’re in a café, tell her about an amusing thing that happened to you involving coffee. This was solid gold, and we were all feverishly taking notes.

Each point was justified with the refrain, “Girls are like this, they…” A woman’s mind may be a mystery to lesser mortals, but not to a Male God with a developed plan.

We even learned two magic tricks. In one, you hide a coin behind your shirt collar, then take another coin, put it in your mouth, and pretend with choking noises that it has pushed through your larynx and the back of your throat to emerge from behind your neck, miraculously unbloody. For the other, crumple up two tissue balls, tell the girl that one represents you and the other her, then put one in her hand. Only… wait! Through sleight of hand, she finds she has both tissue balls, and is presumably now begging to go to bed with you.

But don’t take Cirl’s word for it. With these simple techniques you can pick up someone in any situation, he told us. A dramatic pause. “Watch this.”

To our admiring gasps, Cirl walked out of the private room and into the café. As we watched through the glass, he loped around like a wolf on the hunt, casting a roving eye for targets. Coming full circle, he approached (from an angle) a young woman who was sitting alone directly in front of us, reading a science fiction book. Cirl straightened his back, switched on the charm, flashed a smile, and sat down opposite her. Minutes later, he had whipped out his deck of cards and was showing her a magic trick. She was captivated, all smiles and interest and phone number. Hallelujah!

When Cirl came back into the room and winked at us, we applauded. The corner of his lips had that squinted half-curl when you’re trying not to look smug. His conquest didn’t look up once, despite our being right next to her through a glass wall.

After the session, now that I had been initiated, I used some of the tricks I had learnt to start a conversation with that young woman. I approached from an angle. I knew the book she was reading, and told her an interesting story about it (in hindsight, I’m not sure knowledge of Chinese sci fi is a player move). My smile was like bright sunlight in the morning.

Under the barrage of my PUA charm, she relented. I got what I came for. She admitted, with a timely hesitation and a silent expression, that she was a plant.

Three people have already signed on for Cirl’s 4,800 yuan three-month “Male God” course. He should switch fields and teach entrepreneurship. 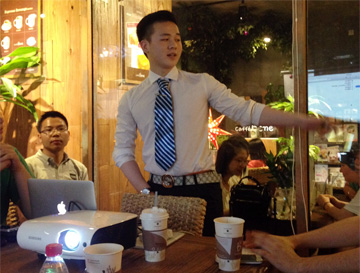