Mr. Sun is 67, with a helmet-shaped mop of silver hair, half his teeth missing, and a generally ragged look to him. He’s an old Beijinger, and lives near the east gate of Tiantan Park, not far from the Forbidden City. Every Sunday, he goes into the park — but not for a stroll. He’s there to browse in the marriage market, looking for a match for his daughter.

Every Sunday afternoon in Beijing, in two central parks, middle-aged parents advertise their single children (in both meanings of the adjective) as marriage material, while other parents browse. Key information about prospective husbands and wives are age, height, education level, job, and — especially for the guys — whether you can have a car and a flat.

Mr. Sun struck out in Tiantan Park, so he got on bus number 60 to Zhongshan Park, a short hop away where there was another market, to try his luck there.

Inside the park, the boulevard next to the moat that hugs the Forbidden City is split into two long columns, where parents have come to advertise their children as marriage material. “Buyers” mill around, while “sellers” sit on fold-out canvas stools, fanning themselves in the summer heat. An A4 piece of paper is on display in front of each of them, listing the product specifications.

With dark wrinkled skin, taut on his lean frame that barely props up a loose blue shirt, Mr. Sun looks like a lone wolf that has fallen on hard times. He prowls up and down the strip with the other parents, peering down at the adverts. A hemp bag dangles from one hand. Inside is a thermos of tea, a pouch of rolling tobacco and papers, seeds and fruit to snack on, and a black notebook in which he writes down information and phone numbers in a shaky hand.

“Beijing male, born 1987, undergraduate degree, height, 1.73 meters, airline company, has car and flat.” Some of the A4 pieces of paper are handwritten, most are printed. Those that go the extra mile are laminated, or kept in transparent slips. “Seeks: Beijing female, height more than 1.60, training college degree or higher, has job.”

No good, the guy is too young. Mr. Sun walks on.

A pity. If it weren’t for the height requirements, it might have worked.

Mr. Sun’s daughter was born in March 1979 and is 1.83 meters (six feet) tall. She’s a graduate from a sports and physical education college in Beijing, and works as a school PE teacher. She’s never had a proper boyfriend before, in part because Mr. Sun disapproves of her dating casually. Now it’s hard for her to find a match, because of her age but also because of her height and strong build, which puts men off.

There are other ways for his daughter to find a man on her own, he knows — he just doesn’t like them. “In the eyes of us old Beijingers, bars aren’t respectable,” he says. “And the internet isn’t reliable.” His daughter, meanwhile, doesn’t want him coming to the marriage market, because she thinks it’s old-fashioned. Sometimes he passes her a phone number, but she’s never once followed up with an actual date.

Mr. Sun is undeterred, and has been coming to the markets every weekend for a year. He likes it because he can talk with the parents and get a good impression of their children, although some of them are prone to exaggeration. For his daughter, he’s looking for a Beijing guy over 35 years old, and over 1.90 meters tall (about 6 feet 2 inches — a rarity). A stable job is also important, as it seems to be to all of the parents here.

But he has also has another condition, which doesn’t appear on any of the adverts, and seems virtually absent from the whole market. The prospective couple, Mr. Sun feels, should love each other. That feeling can come slowly and later, of course, but without at least a deep shared affection, what’s the point of getting married? He’s not looking for a new TV for his daughter, he’s looking for her life companion.

While I’m doing this interview, off to one side from the main strip, a small crowd has gathered around us. “Another journalist!,” one of them psshes in disapproval, “there was a German TV crew here last weekend too!” Young park-goers are taking pictures of me on their iPhones. But most are interested in the conversation, and one short Chinese lady in a pink baseball hat pipes up.

“You’re too naive,” she tells Mr. Sun. “I’m here for my daughter too. I have one important condition [for her future husband]: he must have a flat in Beijing that is 40 square meters or bigger.”

Mrs. Meng is about the same age as Mr. Sun, and is also from Beijing, but looks healthier. She has color in her cheeks and a cheeky smile with only one tooth gone at the back. She hands me a slip of paper with her daughter’s details on it — she’s selling. “Female, born January 1984 (pig), height 1.77 meters, studied in Australia … works in a bank.” She even shows me a photograph from her wallet, of a pretty, conservative-looking girl, although she doesn’t give the photo out.

Next, the ask. The lucky man to snag this catch must: “Have flat, have car, work and life conditions excellent in all areas. Hope to find an outstanding and willing man to take her hand.”

While I read this, Mrs. Meng and Mr. Sun are having a little argument. Mr. Sun is trying to explain his point that if the young couple don’t like each other, it won’t be a happy marriage. Mrs. Meng rejects this logic, repeating that if a man’s economic conditions aren’t good enough, he’s not suitable for her daughter. I’ll admit this happened fast and their accents got a bit thick, but that’s the gist.

Then Mr. Sun turns to me. “Do you know about Chinese history? There was a period of confusion.” I guess he is talking about the Cultural Revolution, and he nods that’s right. “I was very wretched in those days, because I came from a bad family background.” It suddenly makes sense — his ragtag, almost beggar-like look, the heavy tan, those missing teeth.

“Because of that,” he says — and I got the impression he was talking to Mrs. Meng through me — “I know that feelings are also important.”

I don’t get to ask what Mr. Sun’s full story is, and I wouldn’t have known quite where to begin. He goes back to his browsing, while Mrs. Meng brushes him off and returns to her stool. She isn’t only looking for a match for her daughter, I realize, but for her own pension plan.

The market bustles on. Phone numbers are sold and bought for promises of compatibility. Information is traded like stocks. And Mr. Sun walks languidly through it all, looking at this or that notice, sometimes stopping to ask a question or chat — turning up his nose at most, or jotting down the occasional prospect. After less than an hour, he leaves the park and takes the no. 60 back home, to pass what contacts he has gathered to his daughter.

It’s a big country, with a market for love as cruel as the housing market, and you’d be forgiven for confusing the two sometimes. But there are still traders who believe in love. The right man is out there for her, he’s sure of it.

This post is adapted from a previous version published at The Anthill. 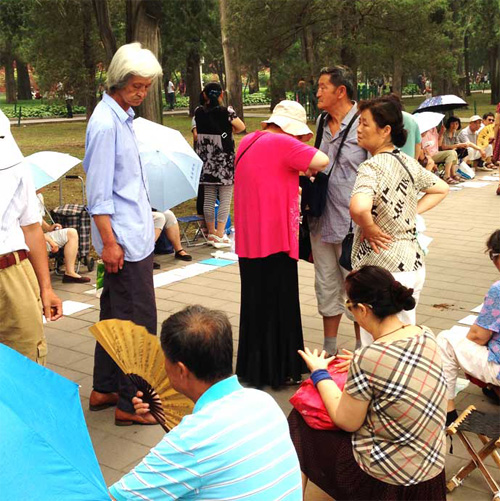