In Michael J. Green’s rich and ambitious history of US strategic thinking toward Asia, one question stands out: What are Americans trying to accomplish there?

The answer, Green suggests in By More Than Providence: Grand Strategy and American Power in the Asia Pacific Since 1783, is not always clear to US policy makers and their contemporaries, nor even to historians in retrospect. Still, he argues, the United States’ power in the Pacific Ocean and across much of Asia emerged from a uniquely American history of strategic thought and action. A central goal of the book is to situate post-war US-Asia policy within a legacy of ideas and debates that stretches back to the founding of the republic, the country’s westward expansion across the continent, and the earliest demands on the US government to defend American merchants and missionaries working in Asia.

Adopting a frame of grand strategy that fits better in some eras than others, Green invites the reader to evaluate how effectively generations of US leaders aligned an understanding of the “ends” of US policy with realistic “ways” to employ the country’s available “means.” The most successful periods in US policy toward Asia are thus depicted as those during which ends were well-considered and policy makers effectively marshaled military, economic, ideational, and other sources of US power to achieve them. In this context, history unfolds as a long progression of policy debates, external shocks, presidential proclivities, and activist advisers, punctuated by scarce moments of exhilarating strategic coherence. In many eras, the “ends” or goals of US policies are just as contested as how to pursue them. In other periods — perhaps including today — the ends are rarely contested but instead taken as assumed even as debate thrives over how to accomplish them.

Though always careful to give credit where it is due, Green reserves his highest praise for two periods in US grand strategy. For him, the first clarion moment comes during the presidency of Theodore Roosevelt who, Green writes, “wanted to shape a regional equilibrium that would increase American influence and reduce the risk of further conflict” following the Sino-Japanese War, the Boxer Crisis in China, and Russo-Japanese competition. At the same time, the “insular acquisitions” of Hawaii, Guam, and the Philippines in 1898 and 1899 had recently entrenched US involvement “forward” in the western Pacific when Roosevelt rose to the presidency in 1901 after the assassination of William McKinley.

Roosevelt, who had served as assistant secretary of the Navy, had a longstanding affinity for the prominent foreign policy and sea power theorist Alfred Thayer Mahan. “Before Mahan and Roosevelt, American interests in Asia had been described primarily in opportunistic terms,” Green notes. “In contrast, Mahan and Roosevelt saw both the opportunities and the dangers” in relations across the Pacific. These perceived dangers were concrete. As Green writes in recounting Mahan’s arguments: “Although the harbors and port cities dispersed along the American coasts might be sources of enormous commercial advantage in peacetime, they created an indefensible line of targets in wartime … [T]he combination of geography and technology (steam power and steel) meant that forward presence in the Pacific was necessary not only for access to China but now also for defense of the homeland.” The ends of Asia policy had expanded from a focus on commerce to include national defense at a distance.

The result of this vision of what Green and some of his subjects call the US “forward defense line” was that the Philippines, Guam, and Hawaii served as means to defend against a potential Russian or Japanese sea attack on the continental United States. Preventing armed attack against the US homeland is perhaps the one goal everyone can agree is an important and legitimate objective for US policy in the Pacific, and the debate over how to estimate risks and accomplish this objective while adapting to geopolitical, technological, and ideological transformations remains alive and relevant today. In the Roosevelt-Mahan case, justifying a forward presence as a means to defend the homeland turned the defense of those vulnerable outposts into a subsidiary end of its own. The legacy of that geopolitical lurch forward persists in Asian bases and strategic debates to this day, thus Green’s treatment of the ever-evolving debates over the proper role and position for a US forward defense line in the Asia-Pacific alone justifies the book’s 548-page heft (plus endnotes).

What Green argues Roosevelt was trying to accomplish, however, was not merely to defend against potential attack, but also to achieve a comparatively stable balance of power among northeast Asia’s strongest actors. For Green, it was this comparatively holistic view that earned Roosevelt status as a practitioner of grand strategy.

Not until President Richard Nixon and Henry Kissinger enter the stage does Green find a US strategic approach as worthy of praise as Roosevelt’s. “At the structural level,” Green argues, “Nixon and Kissinger midwifed a new post-Vietnam era of American strategy that realigned ends and means and shifted the structure of global geopolitics from bipolarity to a new multipolarity, establishing a favorable equilibrium that went a significant way toward restoring the credibility of American power.” The signature structural gambit of the Nixon administration, of course, was to seek engagement with the People’s Republic of China, seizing on growing divisions between Chinese and Soviet communists and undermining the tidy image of a bipolar communist-capitalist system. Green gives due attention to Nixon’s Guam Doctrine — designed to “shift a greater burden for self-defense to the successful allies in the Far East” — but it is the broader global vision that again earns his praise. In this narrative, the US goal was seemingly simple: gaining advantage in the Cold War contest with the Soviet Union.

Such clarity of ends has not been so easily available since the disintegration of the Soviet Union, and, perhaps as a result, some have argued that grand strategy died with what Francis Fukuyama called the “end of history.” Green argues, instead, that neither history nor grand strategic thinking are dead, and that US policy toward Asia today can be informed by past successes and failures. Green’s portrayal of grand strategic thinking also reveals that world events can determine whether there is an imperative or opportunity for great moves. Roosevelt was not just a strategic thinker but also faced a period of immense change in Asia while US.  capabilities were increasing. Similarly, it might have been true that only Nixon could go to China, but he couldn’t have done so in the late 1950s, when, Green observes, “[s]tructurally, there was still no balance-of-power logic for Beijing to pursue Sino-US rapprochement to counter the Soviets.”

Having served on President George W. Bush’s National Security Council staff, Green is admittedly subjective in giving that administration generally good marks for handling that era’s great geopolitical shift, the continuing rise in China’s absolute and relative power. Green is highly critical, however, of the Obama administration’s “piecemeal, inconsistent, and poorly coordinated” follow-through on its “pivot” or “rebalance” rhetoric, and of attempts to develop strategies that broke from past conventions to address transnational challenges such as climate change, terrorism, or global health. “The Obama administration prided itself on moving beyond the geopolitical old-think of prior administrations but ironically demonstrated why historically informed grand strategies are so crucial to statecraft in a competitive region like Asia,” Green concludes in his tough review of recent policies.

What the book leaves unclear in advocating for historically-informed and artful strategic thinking is what ends the people of the United States (or, if you like, the people of the world) should hope the US government will pursue. Many who did not serve with Green also applaud the Bush administration’s stewardship of the US role in East Asian security — but no administration has shown evidence of a truly open conversation about ends, ways, and means in view of China’s increased power in the post-Cold War period. Green argues that the quintessentially grand-strategic issue of the “forward defense line in the Pacific will become increasingly complex as China tries to draw its own defense line forward.” But if US strategists are to take up Green’s concluding charge to “increase the prospects for peaceful management of the next power transition in Asia,” they’ll need to have that missing and uncomfortable conversation about ends. What, indeed, are Americans trying to accomplish?

Such a conversation would ideally be influenced by the historically-informed strategic thinking chronicled in By More Than Providence, as well as by the Obama administration’s insight that conventional models of thinking are ill-fit to solving some of today’s unconventional challenges. Unfortunately, there is no sign that the US government and political community are taking on this difficult and epochal strategic question. So far, at least, the Trump administration displays none of the coherence required to even judge whether its policies are sound on a rubric of grand strategy. It seems likely that Green, one of many foreign policy specialists who served in Republican administrations but signed letters opposing Trump’s campaign, is as alarmed as anyone observing the dissonance between an erratic White House, the stoic efforts of civil servants, and the tragicomic spectacle of high officials projecting normalcy when the US reality is anything but.

Graham Webster is a lecturer and senior fellow at Yale Law School’s Paul Tsai China Center, and he writes and publishes the U.S.–China Week newsletter. 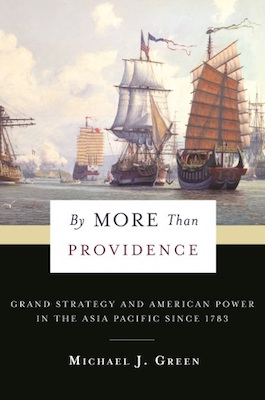