A Collectively Compiled Compendium in memory of Liu Xiaobo, Chinese writer and Nobel Peace Prize winner, who died on July 13.

“White Sun”
(The verses that follow were written in Beijing on the morning of July 14, 2017, and are the work of the poet An Hu. They have been translated, with the author’s permission, by Nick Stember.)

The wind in Beijing
Was unusually strong last night
Lightning flashed, thunder roared
But repression works
In the end
The rain never fell

This morning, I mentioned to my wife
That someone
Had died
She said, I don’t know who that is
So isolation works

A few days ago in a poem
I said that his life and mine
Couldn’t have been further apart
I was wrong, though

While I was putting the poem
To paper
My two-year-old son
Pointing, said
Da, look
White sun

Words that Laila Lalami tweeted in 2014 capture well a sentiment felt right now by those of us who have been involved with LARB’s coverage of China. “These days,” the award-winning author and LARB contributing editor wrote, with disturbing developments in other parts of the world foremost on her mind, “you have to have a heart of steel to get through the front page of the newspaper.”

This is due above all to the tragic news of Liu Xiaobo’s death. It is worth noting, though, that other things contribute to a sense of darkness among us just now. To mention just four items, in a list that could be easily expanded to be a long one, we have been reading of disturbing developments in Hong Kong relating to censorship and control; we have seen reports of Beijing-backed moves against Uyghurs studying abroad; we are acutely aware of the limited number of world leaders who spoke out strongly in support of Liu’s wish to be able to go abroad for treatment and spend time with those he loved before dying; and we fear that the poet Liu Xia, the prisoner of conscience’s beloved wife, will continue to experience the kind of persecution that has been her fate in recent years.

It is also worth adding that there is an added twist to Lalami’s comment for us just now: we worry about the limited ability of the stories that concern us and fill our social media feeds to making it onto the front pages of newspapers. We worry that they will not rise to the top of new sites. We worry that, when they do receive prominent placement, the stories, no matter how poignant and compelling, will have a difficult time grabbing or at least holding the interest of people only casually interested in China, given how many other distressing things clamor for their attention.

We do not want to duplicate the efforts that many others, including sites such as China Digital Times and ChinaFile, have been making to assess the meaning of Liu Xiaobo’s life, writings, and death. One thing we can do that may be of use is offer a list of some links to which those interested in learning more about the man and coming into direct contact would find it valuable to turn:

Sample translations of Liu’s writings can be found here (in a book that includes poems and such important essays as “Listen Carefully to the Voices of the Tiananmen Mothers”) and here and here in short samples online.

Two moving tributes to him written before his death by two people who knew him well, Ilaria Maria Sala and Geremie Barmé, can be found here and here.

The New York Review of Books has published important essays relating to Liu Xiaobo and/or Liu Xia by Perry Link and Ian Johnson that can be found here and here.

Among the many Twitter feeds that have dealt well with the Nobel Peace Prize winner’s death and its aftermath and include links to many pieces that supplement those we have just mentioned, we would like to single out those of Emily Rauhala and Joanna Chiu. For some sense of past assessments of Liu, this link will take readers to a series of posts relating to him that appeared between 2008 and 2012 at the China Beat blog, a precursor of sorts to this one. 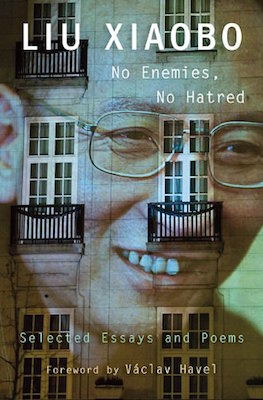