We generally think of Shanghai between the world wars as unique, a one-off city forming a crossroads between East and West. It was, according to this line of thinking, unique in being a place representing the modern in a country largely composed of the ancient. This vision of it is compelling, but one can’t help reading Charles King’s excellent new biography of inter-war Istanbul – Midnight at the Pera Palace: The Birth of Modern Istanbul  – without drawing comparisons between the city on the Bosphorus and the city on the Huangpoo. The similarities are legion: in general, both were forward-looking cities in countries that had suffered long-term decline in economic and political power; both were cities that, although not capitals, became the fulcrums of their national politics; and both were cities that sought modernity with a humongous appetite for the novel and the cosmopolitan.

On a more specific level, these were cities forced to deal with immense inward migrations, both from their surrounding national hinterlands and from overseas. Both Shanghai and Istanbul largely welcomed refugee communities, which added to the vibrancy and entrepreneurial spirit of each metropolis, and both developed inter-war demi-mondes, arguably without parallel except to that of the other, giving each city the reputation of being a complete and utter nest of spies, home to international ne’er-do-wells, adventurers, and remittance men, hotbeds of the violent extremes of 1930s politics. They were urban twins of a sort, perhaps, though not of the identical sort up to World War II. Yet, they would have radically different fates during that great conflagration, and in its immediate aftermath. To compare Turkey and China in the second half of the twentieth century is akin to comparing chalk and cheese; to look at the two countries, and their largest commercial cosmopolitan cities, in the first half of the century, by contrast, is to see two sides of the same coin.

Hotels, it would seem, have become a popular way of looking at urban history. Matthew Sweet’s The West End Front: The Wartime Secrets of London’s Great Hotels recently examined life in London at war through the eyes of its celebrated hostelries and their occupants, while Tilar Mazzeo’s The Hotel on Place Vendome did a similar job for occupied Paris. Shanghai of course had its own grand hotels, of which Sir Victor Sassoon’s Cathay (subject of its own, less recent book, Vicky Baum’s novel Shanghai ’37) was perhaps the equivalent of Istanbul’s luxurious Pera Palace. Shanghai was a treaty port forged into an International Settlement (with a tacked on French Concession) defended by foreign troops of multiple nations; Istanbul was a city occupied by Europeans and Americans in the aftermath of World War One. Both were great ports, trading centres that developed into multi-ethnic entrepôts (with all the tensions that inevitably generates) and subject to repeated waves of migration, much of it from vast, and generally impoverished, hinterlands, and affected by political chaos elsewhere. Both cities saw massive influxes of White Russians following the Bolshevik Revolution, and then Jewish refugees after the rise of Nazism, as well as the usual cast of international sojourners and escapees from Prohibition, Depression and the studied boredom of the European and American upper crusts.

On a high political level both countries were forging a new notion of nationhood for themselves. In the aftermath of 1911, Chinese republicanism went through various iterations (a radical Sun Yat-sen to an almost monarchical Yuan Shih-kai with a few also-rans in between and after) to arrive at Chiang Kai-shek and the Kuomintang. In Istanbul, Mustafa Kemal Atatürk was portrayed as the father of the nation, an accompanying personality cult mirroring that of Generalissimo Chiang in China. Both were grand unifiers who emerged from internal political schisms they later sought to gloss over but never fully eradicated. Each man saw rebellion and betrayal everywhere, and each sought to impose his own definition of modernization on an ancient society (Chiang’s New Life Movement had many similarities with Kemal’s reforms in Turkey). Both were ardent nationalists presiding over relocated capitals (Nanjing and Ankara), were political vanguardists and supreme leaders who disliked leftists and weren’t overly keen on democracy (though both also introduced limited forms of suffrage to their nations). The two leaders attracted significant international interest and support (though perhaps neither were loved in foreign capitals), as well as domestic hatred and ire – Kemal was to appear on roughly as many American and European magazine covers in the 1920s as Chiang Kai-shek and his glamorous wife did in the 1930s.

Shanghai, though in the hands of foreigners by and large, represented the modern China that Chiang wished to see emerge in the same way that Istanbul represented a modern Turkey for Kemal. The outward symbols of inter-war modernity flourished in both cities: cars and their blaring horns, gramophones, planes, trains, cinemas, dancehalls, alcohol and all forms of noise. The heightened sounds of the street—sirens, fire engines and electrical amplification—regularly denote urban life in both places in their respective literature and poetry. Fusion abounded – local Istanbullu musicians created the “Turkish Tango” around the same time foreign and Chinese musicians experimented with “Yellow Jazz.” Tuxedos, felt trilby hats, plunging necklines and raised hems fed the fashion and society pages and beauty pageants, seen at the time as progressive and modern, proliferated. In Istanbul, as in Shanghai, modernity demanded modern women as consumers and workers – the rise of the shop girl, the waitress, the artist’s model, women on public transport, in theatres and cinemas. Writers, poets, artists and photographers, male and female, found burgeoning new mediascapes in both cities to express themselves. In tandem the two cities developed a global reputation for worldliness, experimentation, and modernity.

Look down another level and both cities seem to mirror each other yet again. Shanghai’s role in the global inter-war narcotics trade largely took off after internationally demanded crackdowns were instituted on the dope trade out of Constantinople (as Istanbul was then called). Every major narcotics trafficker from Paul Carbone and Francois Spirito in Marseilles, the Eliopoulos Brothers in Turkey itself, through to the Katzenberg-Buchalter gang on Brooklyn’s Seymour Avenue moved much of their opium sourcing from Istanbul to Shanghai in this period with only brief interruptions in supply. Sex sold too—Istanbul’s harems and seraglios had long titillated foreigners, who saw them as bordellos in popular imagination, just as Shanghai’s sing-song houses had gained a somewhat unfair reputation as out-and-out brothels. The appearance in Istanbul of come-one-come-all brothels staffed by an international set of working girls, all fully licensed in the age old attempt to control the spread of disease, turned the city into a sex tourist sin city the parallel only of Shanghai. Accusations of rampant “White Slavery” and trafficking of women dogged both town’s reputations – and not without strong evidence of both cities as crossroads and destinations for the early twentieth century’s global sex trade. Istanbul, north of the Golden Horn and into the Pera district (now Beyoğlu), was the nightlife equivalent of Shanghai’s most sinful strips – Blood Alley, the Badlands, Jukong Alley and The Trenches. Turkish nationalists referred to Istanbul as a “Byzantine Whore”, while “The Whore of the Orient” was the popular nomenclature for Shanghai. Both were run by governments regularly accused of not doing enough to stifle the sin trades. But then, as King points out, “modernity demands a tolerance for raunchiness.”

And why would they stifle anything? Both cities largely turned, not on politics or nationalism, but on money. Istanbul and Shanghai both went through prolonged post-First World War economic booms, while their surrounding lands supplied raw materials and labour. They emerged as cities of middlemen, go-betweens, fixers – capitals of the principle of buy low, sell high. Continued clashes in the old Ottoman Empire matched the warlordism of China, but, arguably, both Istanbul and Shanghai ultimately profited from their proximity to unstable hinterlands. Influxes from troublesome areas merely improved economic conditions in the long run and furthered the advances of modernity – Greeks, Jews, Armenians, and progressive Turks of course, all fuelled Istanbul’s economy. They pushed every business to the extreme from shipping to espionage, from leisure to gunrunning. And not forgetting those White Russians and their twilight world of statelessness. King’s book tells of White Russians moving through China – Harbin to Peking to Tientsin to Shanghai – and sometimes on to Istanbul and the gateway to Europe and boats to America. But there was a traffic the other way too – the great White Russian entertainer Alexander Vertinsky performing in Istanbul for a while before moving on to Shanghai and opening The Gardenia Club in the city’s Badlands where he ruled the roost of nightclub hosts for several years.

Between the wars to be cosmopolitan was to travel to Istanbul and Shanghai – so many sojourners’ memoirs recall both on their grand tours of the globe. Others found freedoms unimaginable in their home countries – African-Americans found Istanbul a place they could do business. King gives us the example of Frederick Bruce Thomas, the son of Mississippi slaves, who arrived in Istanbul via Moscow in 1919 and rose through the demi-monde to run the grand salle of Maxim in Pera in the 1920s. Thomas created the city’s greatest nightclub with a black jazz band on stage nightly. Shanghai had its own equivalents of Bruce Thomas who rose to nightlife fame – former Folsom prison inmate “Dark” Louis Ladow, owner of the famed Old Carlton Café, and African-American musicians such as Teddy Weatherford, Valaida Snow and Buck Clayton. They pioneered the Jazz Age in Istanbul and Shanghai, though arguably paid heavily for the privilege of being pioneers – Thomas ended up in debt, his nightclub much copied by imitators and died in Istanbul; Louis Ladow too overextended himself, went bankrupt and died soon after in Shanghai.

Historical and cultural circumstances meant differences between the cities of course existed. Istanbul was always effectively Turkish; Ankara always had sovereignty over it and Turks of varying stripes ran the city. Shanghai’s International Settlement and Frenchtown were effectively split off from China. Nanjing’s writ did not run in either until after the war and the ending of foreign concessions in China. Now they are very different places. The end of World War Two saw Turkey enter NATO, align itself with the West and eye its neighbors and the USSR with caution. China descended into civil war and then opted for Communism and isolated itself from the West, allowing a dust sheet to fall over Shanghai for four decades. It took the Communists a long time to reconcile themselves with Shanghai’s historical role, and it was effectively the last major city in China to be allowed to “open up and reform.” It entered the twenty-first century at a new zenith, though, arguably, its rise to prominence has since peaked, constrained now by a Chinese political system that prevents it achieving its full ambitions to return to full global status and, what some would see as, its historical destiny. Meanwhile Istanbul arguably has it all to play for in the new century. As ever positioned between East and West, on the cusp of possible entry to the European Union and with a more vibrant democracy to shape its course. Istanbul could be a city about to undergo another historical “moment.” Istanbul and Shanghai, once two sides of a similar coin, are still playing out their alternately parallel and very different destinies. 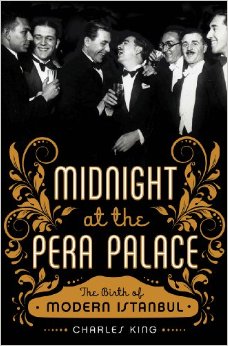