As fans of the “Inspector Chen” novels know, the Shanghai detective not only excels at solving crimes and navigating the complexities of politically tricky situations but also writes verse.  Now, thanks to Qiu Xiaolong, a poet and translator (as well as a writer of mysteries), a collection of Chen Cao’s poems has become available.  Here we provide an introduction to the volume penned Qiu, who unquestionably knows Chen and his poetry better than any other person on earth does—or ever could—due to the crucial role he has played in chronicling the versifying sleuth’s cases and writings.

Introduction to Poems of Inspector Chen

The poems in the present collection are compiled chronologically, to be more specific, in the order of their appearance in the novels in the Inspector Chen series. Less than half of the compositions in the collection appear in the novels, as fragments or whole poems, but even those published there in their entirety have been altered in small or substantial ways here.  Also worth noting is that some of the poems that appear in the novels could also have been written earlier, even in the days before Chen became an inspector.

Chen Cao started writing during his college years in the early eighties, a period sometimes described as a “golden” one for modern Chinese poetry.  After the end of the Cultural Revolution in 1976, a considerable number of young people burst confidently onto the literary scene. But Chen is more of an accidental poet. While majoring in English and American literature, he studied with the well-known poet and critic Bian Zhilin (1910-2000), and handed in several pieces written as a sort of homework. With Bian’s encouragement, Chen had them published in Poetry and other magazines. In the meantime, he started translating T. S. Eliot and other Western poets, which added to his visibility in the circle.  While doing research for his thesis on Eliot, he fell in love with a young librarian named Ling in Beijing Library. Some of his early poems turned out to be idealistic in spite of the modernist influence.

It did not take long for a different tone to be discernable in his lines. He parted with Ling after learning about her father being a powerful Politburo member.  He was concerned about his possible loss of independence in the event of such a family alliance. Then, after college graduation, he was assigned by the state to work at the Shanghai Police Bureau, an arrangement which was taken for granted in the then government policy: people were all supposed to work in the Party’s interests regardless of personal preference.

He worked as an unwilling cop, initially, translating police procedures, composing political newsletters, doing all sorts of odd jobs. His poems grew somber, leading him to be viewed as a “Chinese modernist,” a politically negative label. His membership in the Chinese Writers’ Association helped little.  Among his colleagues, he was seen as an unorthodox cop not dedicated to his real job.

But another surprising turn intervened. The Party’s new cadre promotion policy came with an unprecedented emphasis on a candidate’s educational credentials, thanks to which Chen was chosen to rise in the ranks. There was whispered speculation about his off-and-on contact with Ling, with some saying this contributed to his ascension. He was admitted into the Party, given real cases, and rose rapidly in bureau.  As the head of the Special Case Squad, Chen was fortunate enough to find a capable partner and close friend in Detective Yu.  In the early nineties, Chen was made the Chief Inspector of the Shanghai Police Bureau. From then on, his investigations are represented in the nine novels so far in the Inspector Chen series.

Notwithstanding the strenuous caseload, he finds the police work widening the range of the poetic subject matter for him; case inspire him to compose lines in response to the unimaginable cruelties, irrationalities, corruptions, insanities as revealed in his investigations. In A Loyal Character Dancer, he comes to the crucial clue through a poem in the background of the educated youth movement; in The Case of Two Cities, a Prufrock-like parody helps to throw light on his predicament as a Party member cop; in Red Mandarin Dress, studies of comparative poetics lends insight into a complicated case; in Don’t Cry, Tai Lake, examining the pollution of the nature as well as of the human nature prompts Chen into a sequence with a spatial structure; and so on. In each and every Inspector Chen novel, poems are produced or recollected.

Chen’s style is shaped by his police work too. In When Red Is Black, he comes across an incomplete manuscript of classical Chinese poetry translation by an intellectual murdered during the Cultural Revolution. To keep his pledge to the dead, Chen edits the manuscript, adding in some of his own translations, and has this published. Inspired by this process, he also introduces into his own poems a sort of dialogue with the Tang and Song masters, and this interplay between ancient and present-day China and sometimes shows up in snippets of old poems being inserted into his correspondence.

In his line of duty, Inspector Chen has to walk a lot, observing, canvassing, and thinking, around the city of Shanghai, particularly in the old sections of the shikumen houses and narrow lanes, coming upon not just clues that aid his investigations, but also sights that spur reflection in this man who is an independent-thinking intellectual as well as policeman.  He jots down fragments in a small notebook, like the Tang dynasty poet Li He who rode around on a donkey, dashing off the lines whenever obtainable, and dropping them into a cloth bag for composition later. That adds a touch of “found poetry” to Chen’s work.

In the meantime, poetry proves very meaningful for Inspector Chen in an unexpected way. It is not enough, he always believes, to merely focus on whodunit; it is imperative for him to try to reach a comprehensive understanding of the social, cultural and historical circumstances in which crimes and tragedies take place. With the Party’s interest put above everything else—above law—in the one-Party system,  he cannot but face the dire politics involved in investigations, staring long and frequently into the abyss (which in turn stares back). There is no way of solving completely the conflict between a conscientious cop and a Party cadre, but poetry-writing comes to provide a temporary escape from the mounting frustrations involved in confronting this problem. He compares the momentary break to the Song dynasty poet Su Shi’s metaphor about staying on the moon, much higher, but also much too cold to stay for long, though a necessary change for the moment.  A poetic perspective help keeps him from identifying himself with the authoritarian system, so that he may sees things from a much-needed distance.

His rise in the Party system brings about change in his experience as a poet. As an executive member of the Chinese Writers’ Association, he is often chosen as a Chinese representative to meet with western poets and writers, and on one occasions, to lead the Chinese Writers’ Delegation abroad, an experience chronicled in The Case of Two Cities.  Chen has a poetry collection published, but he soon discovers that it is done through a large amount paid by a Big Buck (influential figure) associate in secret, something done to curry his favor in the omnipresent cobweb of connections in China. It comes as a terrible blow to his conviction about the relevance of poetry in today’s society.

During the period, changes also occur in his personal life. Like in a proverb, however,  things go the wrong way eight or nine times out of ten, which cannot but somewhat inform his poems. But a follower of Eliot’s “impersonal theory,” he insists on separating the man who suffers from the poet who writes. In that, Chen also benefits from a tradition in the classical Chinese poetics, in which love poems are read as political allegories through the persona of a unrequited lover. For instance, “untitled poems” by Li Shangyin, one of Chen’s favorite Tang dynasty poets, are often interpreted like that, the way John Donne’s love poems are read for the metaphysical significance.

Along with the spectacular economic transformation in China, the literary scene too is changing dramatically. Not like in the early eighties, instead of being fashionable or politically meaningful with the authoritarian government persecution for any independent voice, a poet like Chen becomes marginalized. In the increasingly materialistic society, less and less readers have the time or interests for poetry. People no longer take it seriously. Even with occasional publishing still possible here and there, it’s more like decoration than anything else.

But with so much happening in the contemporary Chinese society, Inspector Chen has no choice but to continue investigating—and writing. He is becoming over time both a more cynical and disillusioned cop and a more cynical and disillusioned poet. He still remembers what his later father told him, quoting Confucius: “Knowing it’s impractical—almost impossible—to do it, you still have to do what you should do.” 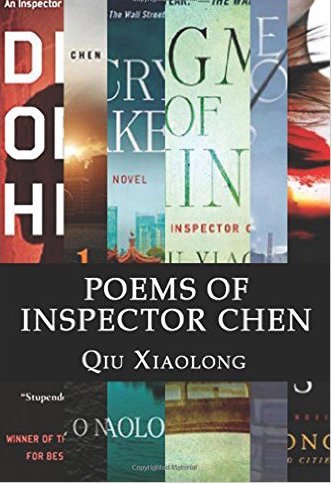