When I visited Hong Kong earlier this month, I did some of the same things I had done six and a half years earlier during a similar short stopover. In March 2009, as in November 2015, I arrived midway through the local literary festival, which used to be held in the spring and now is held in the fall. Then, too, I took part in several different festival panels, one of which was devoted to trends in media; spent a lot of time at the Fringe club, one of the festival’s main venues; and did an interview with a reporter from RTHK, a local radio station, on a subject I had spoken about at a festival event. This way of repeating history led me to reflect on another visit to Hong Kong in November 2014. The literary festival had been underway then as well, but that was not why I was in town. I had come to see firsthand the Umbrella Movement, whose dramatic rise I had been following closely due both to my longtime professional interest in the history of protests, and the fact that I had found the ideals and symbols of the struggle so inspiring. Whether famous writers were in town seemed irrelevant to me then; what was happening in the streets was bound to be more significant.

My most recent trip began on the exact same day, November 5, and in the same way as the one from the year before. I arrived at the Hong Kong airport late, grabbed a quick dinner, and went sleep to prepare for a full slate of activities the following day. This time my first full day in Hong Kong started with a morning cab ride through the city’s crowded Central District en route to meet up with colleagues at the Hong Kong University of Science and Technology, which is beautifully situated across the harbor on a hillside overlooking Clearwater Bay. I looked out the cab window towards the colorful visuals of the passing street: the typical billboards touting products of every variety.

On the morning of November 6, 2014, by contrast, I had walked rather than driven through downtown Hong Kong, for the freeways were still part of a pedestrians-only “Occupy” zone: dotted with tents, featuring a community garden, a people’s library, and a special study area for student activists determined to keep up with classwork while they fought to expand democracy in Hong Kong. As I walked through the Central District I came arcross one-of-a-kind protest posters. Some of these expressed fervent hopes for Hong Kong’s future; some attacked the local Chief Executive, C.Y. Leung, for failing to take seriously his constituent’s interests; some chided Beijing’s leaders for being unwilling to let the city truly go its own way for the promised 50 years following the handover; and some simply expressed solidarity with the Umbrella Movement’s goals in languages ranging from Spanish to Welsh to Esperanto. The sight that captivated me most was the ersatz “Lennon Wall” (a name borrowed from a Prague display area but given local twists), made up of a kaleidoscopic array of pastel colored Post-It notes covered with slogans, wishes, and brief personal testimonies.

I’m not sure what I will remember most vividly about my 2014 trip as time goes on (click here for my more in-depth essay about the trip, “Hong Kong Visions,” published in the main pages of the Los Angeles Review of Books); it might be seeing the Lennon Wall up close instead of just online, or the conversations I had with protesters among the tent-dwellers of the Central District occupy zone, and then later the temporary residents of the related but quite different occupy zone across the harbor in the Mongkok neighborhood of Kowloon.

I do know, by contrast, the one thing I will remember longest about my recent Hong Kong trip: the festival talk I gave on “The Umbrella Movement: One Year On” (click here for my interview following the talk, which summarizes its main points). The intensity of the crowd’s interest was palpable — behind and informing all the questions and comments I received, including ones that challenged rather than supported my assertions, I sensed a genuine desire to think through the topic profoundly, and in a way that mattered.

To give a talk on protests in a room not far from the scene of history-making rallies and demonstrations, to a crowd containing many who had participated in the events and some journalists and scholars whose insightful writings on the protests I had read and learned from, was a unique experience. As someone who has spent much of his career speaking and writing about the Chinese protests wave that preceded the June 4th Massacre of 1989, I have sometimes daydreamed about doing a similar sort of public event in a mainland city. At least for now, that’s something I can still only daydream about doing in Shanghai or Beijing. And while there are many reasons to be deeply worried about Hong Kong’s future, it is important to remember that, at least for now, a public lecture focusing on protest and featuring a large group of citizens thinking together about their city, their politics, and their future, is still possible in that very special city. 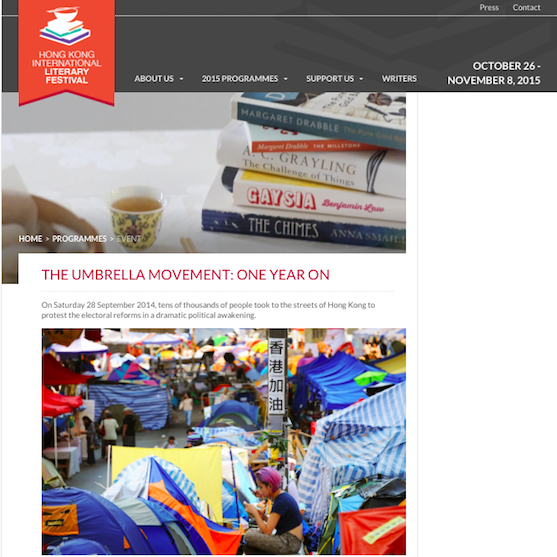